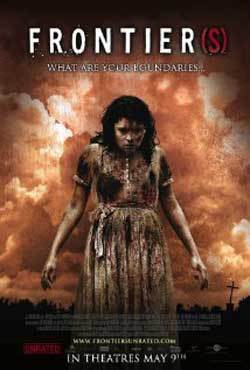 A gang of young thieves flee Paris during the violent aftermath of a political election, only to hole up at an Inn run by neo-Nazis.

The fact that 2007’s Frontier(s) is director Xavier Gens’ first full length movie is impressive, not only in its high quality, but also its far-reaching story that manages to explore so many things but still wrap up in less than two hours (he also wrote the movie, and has since brought us the video game-based Hitman, the well-reviewed The Divide, and even the “X” segment in The ABC’s of Death). This movie opens in complete chaos and never really leaves that arena, no matter what you think might be getting better, instead adding more and more, and just when you think it can’t get much bleaker than it already is, it adds just a little bit more. It is brutal, it is gory, and it is French, so put those three together and you’ll have a good idea what to expect.

Amidst intense rioting over unpopular election results, a group of thieves plan to get out of the city as fast as possible. Yasmine (Yas for short, played amazingly by Karina Testa) and her former lover/father of her unborn child, Alex (Aurelien Wilk), take Yas’ brother, Sami, to the hospital, while Tom and Farid go on ahead in search of a hideout. While Sami dies in the emergency room, Tom and Farid find a hostel run by attractive young ladies who offer food, shelter, and a bed to share…with them. As great as that may be for a few moments, it quickly devolves into severed fingers and car crashes when a cop appears. It’s too bad that Alex and Yas are already on their way.

At one point, Frontier(s) has the familiar Hostel meets Texas Chainsaw Massacre feel, with a group of friends stuck at an unfamiliar place in the middle of nowhere. And if it had stayed that, given Gens’ directorial skills and the talent of the actors, it still would have been a pretty cool horror movie. But it doesn’t just settle for the expected tropes, it adds so much more in to the story. This one really has it all: there’s incest and cannibalism, mutated children and neo-Nazis, torture and car chases and shoot outs and gore, gore, gore. Every time you think the movie is about to go completely off the rails, it manages to reign itself in, keeping the story as believable as it’s going to be, until the next drop off where it gets that much more intense. The gore scenes in this movie are brutal. And it’s all led by very strong performances, mainly by the ladies of the film.

As I mentioned before, lead actress Karina Testa is fantastic in her role as Yas, the beaten, scared, full of fight protagonist. When she is covered in blood, she looks like she is in shock, and when she fights back, she looks truly angry. But she’s not the only strong performance. Estelle Lefebure and Amelie Daure play, respectively, Gilberte and Klaudia, the two lead women who run the hostel. They are convincingly tough and sly, making us at first love them, then just as quickly want to run from them. Meanwhile, Maud Forget plays Eva, another girl at the hostel who may not quite be as evil as the others. And we can’t forget Jean-Pierre Jorris in the role of Von Geisler, or as he’s known around the house, “father.” Whether he’s quoting Auschwitz slogans or ordering the severing of Achilles tendons, his evil knows no bounds. 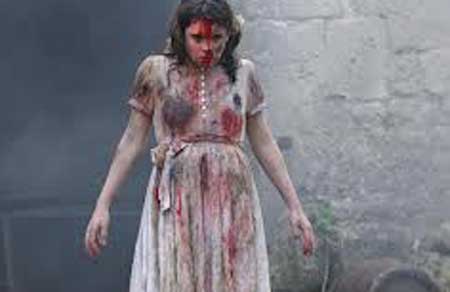 Frontier(s) falls right in alongside High Tension, Inside, Martyrs, and so many others as just one of France’s many recent quality offerings to the horror genre, but for whatever reason doesn’t seem to get as much praise as the others. Xavier Gens is certainly a young filmmaker to keep an eye on, as he is able to throw fast paced gore and action at the audience while at the same time infusing raw emotion and terror. With Frontier(s), he gives us a bleak vision akin to the old saying “out of the frying pan and into the fire.” It’s a story that sticks with the viewer, not just because of the images, but because of the story that is behind them, and I very much want to see more from all those involved with this movie. I give it five out of five exploding heads.