Home | DELIVER US FROM EVIL This October 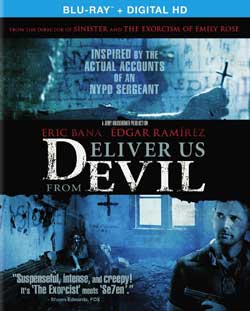 From the director that brought audiences Sinister and Exorcism of Emily Rose comes the action-packed thriller DELIVER US FROM EVIL, debuting on Blu-ray, DVD and Digital HD Oct. 28 from Sony Pictures Home Entertainment. DELIVER US FROM EVIL is a chilling story inspired by the actual accounts of New York Police Department (NYPD) Sergeant Ralph Sarchie (played by Eric Bana, Lone Survivor), who teams up with Father Mendoza (played by Edgar Ramírez, Zero Dark Thirty) to investigate a series of strange events that are taking over and terrorizing their city. Olivia Munn (Magic Mike) co-stars as Sarchies wife and Joel McHale (The Soup) co-stars as Sarchies NYPD partner.
Produced by Jerry Bruckheimer (CSI: Crime Scene Investigation) and directed by Scott Derrickson, the DELIVER US FROM EVIL Blu-ray and DVD give fans bone-chilling bonus materials, including Directors commentary, as well as an all-new featurette, Illuminating Evil: Making Deliver Us From Evil, which explores how writer/director Derrickson collaborated with Sarchie on the film.  The Blu-ray includes three exclusive featurettes: Deliver Us From Demons, gives an all-access pass to the production teams approach to creating a realistic and frightening demonic presence in the film; The Two Sergeants, highlights the collaboration process between Ralph Sarchie and Eric Bana; The Demon Detective offers fans an intimate interview with Sarchie as he recounts some of his more harrowing experiences in the field of demonology.
Synopsis:
A New York police officer Ralph Sarchie (Eric Bana) begins investigating a series of bizarre and disturbing inexplicable crimes. When he uncovers that the crimes are of super-natural origins, he must join forces with an unconventional priest (Edgar Ramírez), schooled in the rituals of exorcism, to combat the frightening and demonic possessions that are taking over and terrorizing their city. Filled with action and thrilling suspense, the film is inspired by the book, which details Sarchies bone-chilling real-life cases.
DELIVER US FROM EVIL is based upon the book by Ralph Sarchie and Lisa Collier Cool; screenplay by Scott Derrickson & Paul Harris Boardman. Executive Producers are Mike Stenson, Chad Oman, Paul Harris Boardman, Glenn S. Gainor and Ben Waisbren.
Bonus Materials include:
§  Directors Commentary
§   Illuminating Evil: Making Deliver Us From Evil  An in-depth exploration of writer/director Scott Derricksons journey as he created the film with a dynamic cast on location in the Bronx.
In this featurette, Derrickson and Sarchies collaboration is detailed, the actors journey into the demonic is explored, and all facets of this unique production is laid bare.
Blu-ray Exclusive Bonus Materials include:
§  Deliver Us From Demons  An all-access look at the production’s approach to creating a very frightening demonic presence.
§  The Two Sergeants  A behind the scenes exploration of the collaboration and process used by Ralph Sarchie and the actor playing Ralph Sarchie, Eric Bana.
§  The Demon Detective  An intimate interview with Ralph Sarchie on his experiences, including his entry into demonology, the power of his faith, and his continuing battles against the demonic.
DELIVER US FROM EVIL is based upon the book by Ralph Sarchie and Lisa Collier Cool; screenplay by Scott Derrickson and Paul Harris Boardman.
The film has a running time of approximately 117 minutes and is rated R for bloody violence, grisly images, terror throughout, and language.
Share