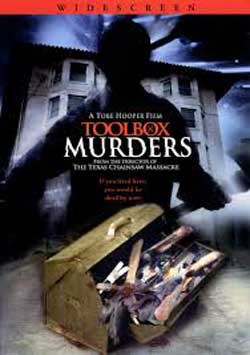 A historic Hollywood hotel houses a supernatural evil. It’s been subdued for decades – but when renovations start, a series of murders take place. It’s up to our heroine to solve the mystery.

The 2004 version of Toolbox Murders is a very loose remake of Dennis Donnelly’s 1978 film of the same name (strangely enough, it was Donnelly’s only movie, as he was mostly a television director, having worked on everything from Adam-12 to The A-Team to Charlie’s Angels). However, aside from the title and the general idea (i.e. weapons of choice and setting), these are two very different movies. 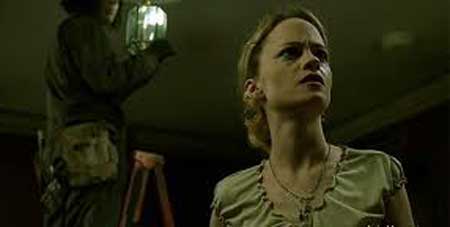 The Toolbox Murders remake comes to us courtesy of horror master Tobe Hooper (Eaten Alive, The Funhouse, and a little movie called The Texas Chainsaw Massacre) and was written by the team of Jace Anderson and Adam Gierasch (writers of the Night of the Demons remake, Hooper’s Mortuary, and Argento’s Mother of Tears). In this one, we are introduced to The Lusman Arms, an old Hollywood hotel under renovation that now serves as an apartment. It is known not only as a place where hopeful actors and actresses stayed upon reaching the big city, but also as a building that is no stranger to tragedy or supernatural evil. And now we watch as its residents are killed off, one by one. 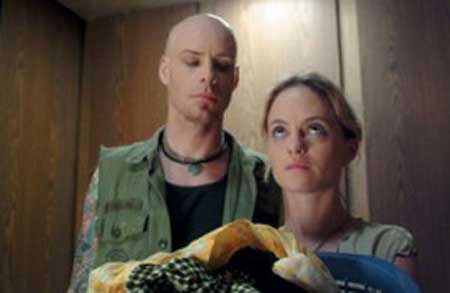 While the opening credit sequence makes the movie look cheap, it really isn’t bad at all. It opens in top exploitative form with a word of warning, a reminder on the screen that each year, thousands come to Hollywood in search of their dreams. Some make it, some don’t, and some just disappear. And then we see a familiar face as Daisy Rain, played by Sherri Moon Zombie (trivia: aside from a couple of tv shows, this is her only movie role in which husband Rob Zombie was not the director), relax in her apartment before being quickly disposed of by a man in all black and a ski mask. And with a quick hammer to the throat and subsequent face-pounding, we see that this will not only be a gory one, but that anyone could be the next victim. 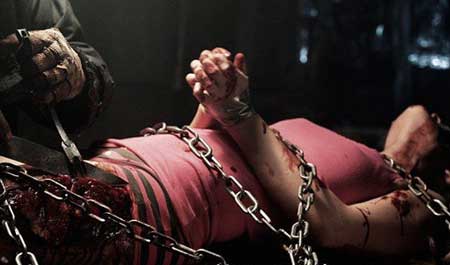 Toolbox Murders introduces us to a whole lot of characters real quick, mostly so that we have a game of “whodunit?” to play, and just as quickly begins killing them off in gruesome, bloody, tool-utilizing ways. There’s the shady building manager Mr. Travis (Byron McLieb) and the hotel staff, Luis (Marco Rodriguez) and Ned (writer Adam Gierasch). There’s Julia (Juliet Landau) and the kid who peeps on Julia, Austin (Adam Weisman). There’s loud neighbor Saffron (Sara Downing) and her intimidating boyfriend Hans (Charlie Paulson, guitar player of that old band Goldfinger). There’s old man Chas, who seems to know all about the hotel and its secrets (Rance Howard). And, of course, there’s the main couple, Steven (Brent Roam) and Nell Barrows (May herself, Angela Bettis). Oh, and then there’s also the killer, credited as “Coffin Baby,” played by veteran stuntman Christopher Doyle. 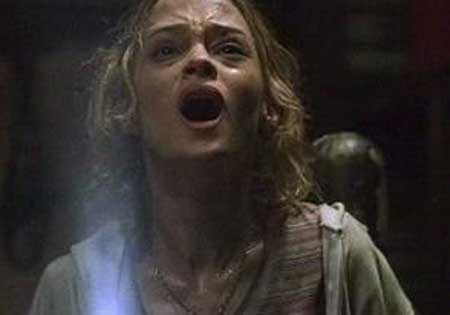 Nell, with a lot of time to herself having just moved in and with her husband being a doctor, wanders around, makes new friends, and discovers the makings of a black magic ritual that may be cursing the hotel. Well, not quite that easily, but pretty much. She learns a little from everyone she talks to, but most of all from Chas, a man who has lived there since the early days of the hotel. He leaves her a note which tells her to check room 504. Thing is, there is no room 504, and when she checks the blueprints, it looks like there is a little extra space in the hotel on each floor where room 104, 204, 304, etc should be, as well as some strange markings on the walls. 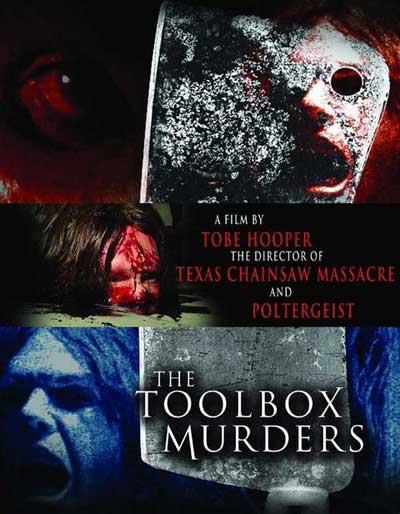 Okay, so the movie goes from typical slasher to slightly far-fetched slasher with supernatural elements, a far cry from the plot of the original which was much sleazier and was a barrage of naked girls, nasty kills, and then weird family drama (more trivia: the original Toolbox Murders was made after the producer gave Donnelly and others a private screening of The Texas Chainsaw Massacre and told them he wanted something like that; interesting how it all comes back around, with Hooper directing this remake). But the kills are pretty clever in this one – hammer, nail gun, drill, etc, and all done with high gore concept. And yes, there are some weak moments, but the back story of the killer is creepy (I’m not giving that away, but his character name gives a hint), and Bettis is, as always, strong, as are some of the other actors. 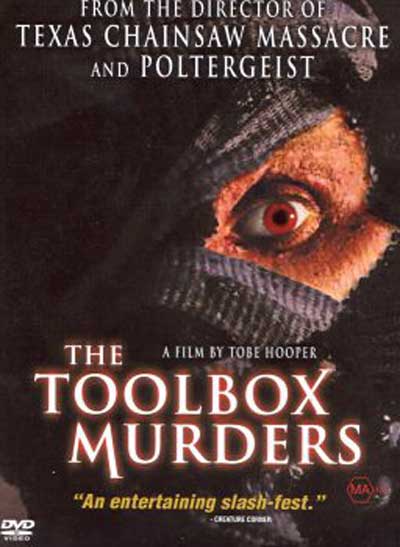 Is the 2004 remake of Toolbox Murders the best movie around? Of course not. But it is one of Tobe Hooper’s more impressive showings of late, his best work having come out back in the 1970’s and ‘80’s. I was nervous going into this one, it seemed give off a vibe of the pointless and poorly done remake, leaning toward the Black X-Mas, Night of the Demons side of bad. But it was surprisingly entertaining and not so bad after all. There is a sequel to this, a movie called Coffin Baby, directed by Dean Jones, in which Christopher Doyle reprises his role, but I don’t think Coffin Baby will be joining the ranks of Michael Myers or Jason Voorhees anytime soon. If you like your horror with more blood than logic, you won’t go wrong checking out Toolbox Murders.