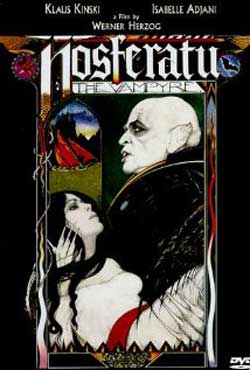 Jonathan and Lucy live in Wismar and the Count wants a house there. Varna is a port on the Black Sea, close to Dracula’s castle.

“Time is an abyss… profound as a thousand nights… Centuries come and go… To be unable to grow old is terrible… Death is not the worst… Can you imagine enduring centuries, experiencing each day, the same futilities…”

Most often, remakes are a mistake: either from being overbearingly loyal to its source (Van Sant’s Psycho for instance) or being fraught with too many self-indulgent asides from the filmmaker as he attempts to make the work his own. In the case of Herzog’s reinterpretation of the F.W. Murnau classic, his film falls into neither quagmire. We have the inclusion of dialogue and colour as well as an otherworldly score by avant-garde band, Popol Vuh (frequent collaborators with Herzog in the ‘70s), Wagner, and Gounod. Not to mention two versions of the film were shot simultaneously: one in English, one in German (nothing dubbed). There is much that is new as well as old. The Vampyre nearly marks the end of Herzog’s most innovative decade of work (Land of Silence and Darkness, Even Dwarfs Started Small, Fata Morgana, The Enigma of Kaspar Hauser, Aguirre, Stroszek), to soon be followed up that year with an equally masterful adaptation of Woyzeck. 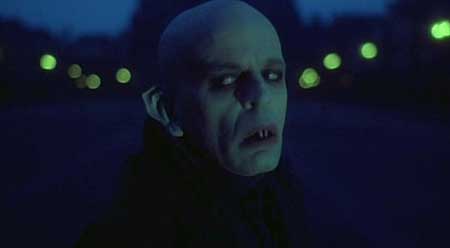 Murnau’s highly-regarded silent film, Nosferatu: A Symphony of Horror, was originally released in 1922 – Herzog’s The Vampyre is more an homage to this cinematic adaptation than Bram Stoker’s source material though there is an adherence to a starkly realistic (and sometimes humourous) portrayal of events which the audience might find familiar if a bit off-putting.

The film opens with an unsettling shot of mummies (from the Guanajuato Museum in Mexico) aligned from children to adults, victims of the cholera epidemic of 1833. In the context of the film (especially considering the ending), it is a portent of the calamity to come. The story should be familiar to most: Jonathan Harker is a real estate agent living in Wismar in North Germany. He is employed by a man named Renfield who asks him to travel to the castle of the nobleman, Dracula, for the Count wishes to purchase property in the area. And so, Harker says goodbye to his wife, Lucy, and for the next four weeks travels to visit the Count in Transylvania. Jonathan stops at a village on the way and is warned by the locals to stay clear of Dracula’s castle. He disregards the heeding but is given a book on vampirism before he leaves to continue his journey. 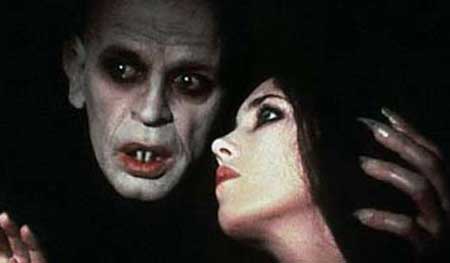 When he arrives at the castle, he is greeted by a pale, thin man, soft-spoken with deeply-seated eyes and long fingernails. He introduces himself as Dracula and is nothing but cordial, however, his lust for blood cannot be quenched. Harker awakes the next morning to find himself locked and gated within the fortress, unable to leave. By the time Harker finally does escape the castle, Dracula has already arrived in Wismar; the ship, bearing only corpses, drifting dead in the harbour. In his wake follows pestilence and an army of rats as he creeps from place to place, his shadow gigantic and otherworldly. The townsfolk begin dying of disease. Soon, the survivors throw a final festival (perhaps the best scene in the film – very signature Herzog). They make merry, eating and drinking in the midst of a horde of rats and corpses. Van Helsing, in this adaptation, is a bumbling buffoon who offers little respite from these horrors. 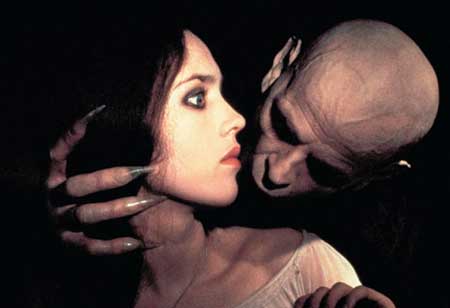 There are some dryly humourous moments as well such as the exchange between Van Helsing and the warden: “The patient that came in yesterday is having a fit. “ “Which one?” Van Helsing inquires. “The one that bit the cow.” Surrealist, Roland Topar, plays Renfield with a frightening blend of exaggeration and sheer madness. Bruno Ganz (Wings of Desire, Downfall) plays Harker and gives a particularly excellent performance the second half of the film. Isabelle Adjani (Possession, The Tenant, The Story of Adele H.) plays Lucy with her trademark wide-eyed gaze and bone pale complexion. 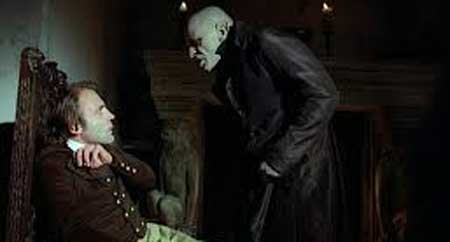 The inimitably intense actor, Klaus Kinski, plays the title role with his usual panache and embodiment of the character. His makeup and wardrobe were modeled (very well) after Max Schreck’s in Murnau’s original. Indeed, many shots in the film are precise recreations of the original film. Herzog finds the perfect balance in combining his own signature style and approach with the inclination towards homage. Upon its release, it was rather well-received, and deservedly so for it effortlessly captures the great tragedy of the vampire: “The absence of love is the most abject pain.”