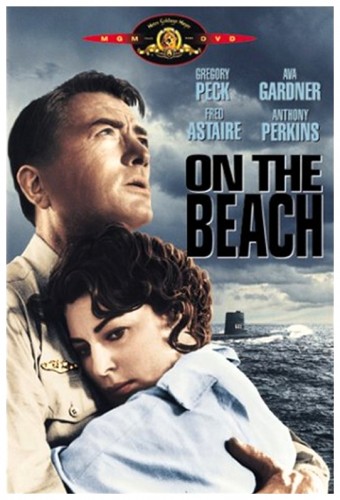 SYNOPSIS:
“In 1964 the nuclear submarine USS Sawfish arrives in Australia after the worldwide nuclear holocaust. Commander Dwight Lionel Towers confirms that the world has been destroyed and the nuclear dust is coming to Australia. The widower Commander Towers, who grieves the death of his wife and children, is befriended by Royal Australian Navy Lieutenant Peter Holmes, who is a family man with wife and the newborn baby Jennifer. He has a love affair with the local Moira Davidson, a still beautiful alcoholic woman with a past, and she falls in love with him. Commander Towers and his crew invite the drunkard scientist Julian Osborne to join them in their reconnaissance voyage to the further North and to the United States, and they return hopeless and aware that Australia and the rest of the mankind has very few days until the doomsday.” (courtesy IMDB)

REVIEW:
Hollywood didn’t really learn to start worrying about ‘The Bomb’ until the fifties beginning with Five (1951), written and directed by master storyteller Arch Oboler. Five is the number of survivors of a nuclear disaster that appears to have wiped out the rest of the human race, almost certainly the first film ever to depict the aftermath of such a catastrophe. In the more famous film The Day The Earth Stood Still (1951), the well-meaning alien Klaatu (Michael Rennie) traveled all the way to Washington DC to warn us against dabbling in atomics. Despite extremely low budgets and other restrictions, there were other films that attempted to portray a world destroyed by nukes, namely Robot Monster (1953) and World Without End (1956). 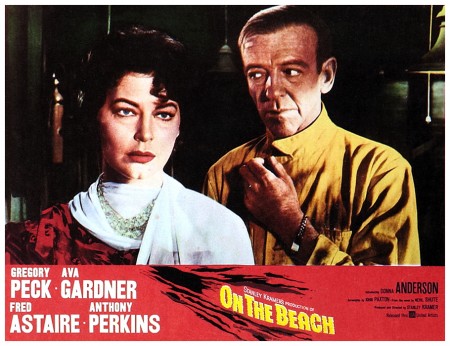 The World The Flesh And The Devil (1958) was a Metro-Goldwyn Mayer film, a studio not normally known for their science fiction efforts. Written and directed by Ranald MacDougall and based very loosely on Matthew Phipp Shiel‘s novel The Purple Cloud, it was very similar to Five (1951) but reduces the number of survivors in a nuclear-bomb-ravaged America to three: a young woman (Inger Stevens), a charming black man (Harry Belafonte) and a cynical world-weary adventurer (Mel Ferrer). Compared to Oboler’s rather wordy downbeat film, MacDougall’s post-atomic war vision is superior in both script and direction. The plot is simple: black man finds white girl, white male racist finds both, and trouble develops. However, the film ends with all three of them walking off into the sunset together, suggesting the first post-nuke ménage à trois. 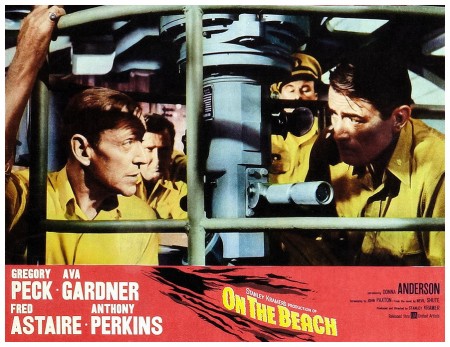 The final word on the atomic bomb in the fifties came from Stanley Kramer, whose production of On The Beach (1959) was based on the Nevil Shute novel published in 1957. It’s set in Melbourne in 1964 after an atomic war has destroyed life in every corner of the world except the southernmost states of Australia. As the deadly radioactive shroud moves slowly down from the north, the people of Melbourne attempt to live their lives as normally as possible, despite the ever-present knowledge that they will all soon die hideously of radiation sickness. Also stranded in Melbourne is an American nuclear submarine, and one of the film’s most memorable sequences involves a voyage it makes to California to investigate the source of a radio signal, only to discover that this has been caused by a window shade blowing against a morse code key. The crew realise that, as they feared, America is totally without life. 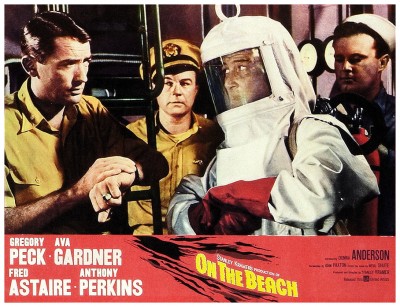 The commander of the USS Sawfish, Dwight Towers (Gregory Peck), whose American family is long-gone, has a desperate affair with Moira Davidson (Ava Gardner). As the radiation reaches Melbourne, the people are offered the choice of taking suicide pills, but some prefer alternative methods of dying. Racing car enthusiast Julian Osborn (Fred Astaire) prefers to go via carbon monoxide poisoning, while Towers has to decide whether to die in Moira’s arms or take his men back to America so they can die on their own home soil. Despite its flaws of mawkish sentimentality and pretentiousness it remains a chillingly realistic portrayal of doom and despair in the face of an implacable force. 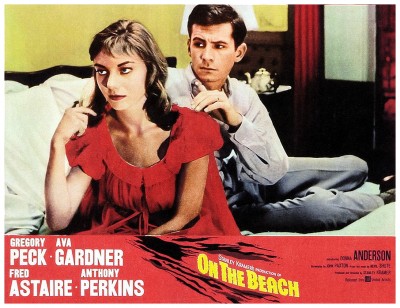 It certainly is a well-made film that doesn’t oversensationalise its subject matter. The scenes of deserted streets in cities like Melbourne and San Francisco are genuinely eerie, and genuinely heartbreaking is the scene in which Australian Navy Lieutenant Commander Peter Holmes (Anthony Perkins) has to tell his wife (Donna Anderson), who never seemed to worry much about anything, that soon they’ll all be dead. Fred Astaire does fine in his first dramatic role, playing a disillusioned scientist who expresses the film’s basic theme: “If we have nuclear weapons, they will be used, intentionally or by accident.” The movie was controversial when it was first released, and could often be seen at anti-nuke fundraisers. Along with Testament (1983), On The Beach is one of the most pessimistic anti-Bomb films because it allows for no survivors, which is probably why the film failed to make its money back on its initial release. It is now regarded as a classic of the genre. 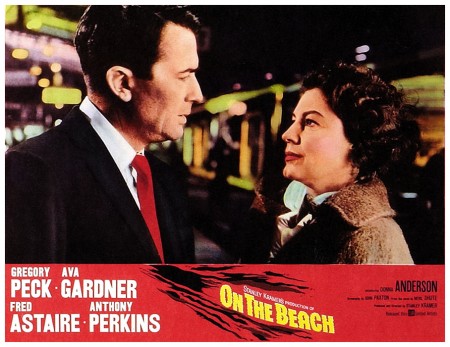 The US Department of Defense refused to cooperate in the production of the film, denying any access to their nuclear-powered submarines, so the production crew was forced to use a non-nuclear Royal Navy submarine instead, the HMS Andrew. Like the novel, much of the film takes place in Melbourne, close to the southernmost part of the Australian mainland. The beach scenes were filmed at the foreshore of Cowes on Phillip Island, and the car racing sequences were filmed at the Phillip Island Grand Prix Circuit, home to the present-day Australian motorcycle Grand Prix, conveniently near Cowes at Phillip Island. Other locations include the Melbourne suburbs of Frankston and Berwick, and some of the streets which were being built at the time were named after people involved in the film, such as Shute Avenue and Kramer Drive. 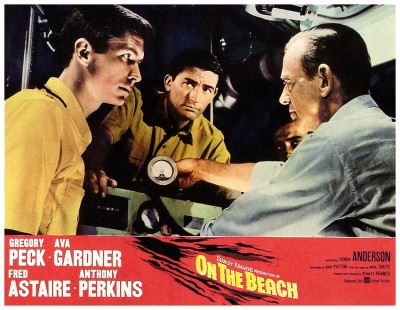 Undoubtedly the most famous piece of trivia attached to the making of On The Beach is the claim that Ava Gardner described Melbourne as, “The perfect place to make a film about the end of the world.” This quote was actually a complete fabrication invented by Sydney Morning Herald journalist Neil Jillett, who wrote a parody piece about the making of the film. The newspaper’s editor changed it to read as a direct quotation from Gardner and was published in that form, quickly entering Melbourne folklore. The phrase ‘On The Beach’ is first-and-foremost a Royal Navy term meaning ‘retired from service’ but the title also refers to the T.S. Eliot poem The Hollow Men, which includes the lines:

“In this last of meeting places,
We grope together, And avoid speech,
Gathered on this beach of the tumid river.”

“This is the way the world ends,  Not with a bang but a whimper.” 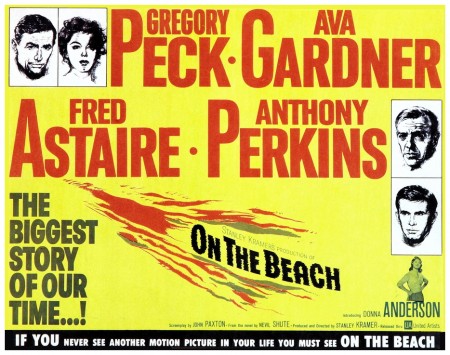 Four decades later an updated adaptation was produced for television starring Armand Assante, Bryan Brown and Rachel Ward, directed by Russell Mulcahy and written by David Williamson. This newer version ends with a quote from a Walt Whitman poem entitled On The Beach At Night describing how frightening an approaching cloud bank seemed at night, blotting the stars out one by one. As much as it resembles the plot of Shute’s novel, the book gives no reference to the Whitman poem, while the T.S. Eliot poem is presented at the book’s beginning. The remake itself received two Golden Globe award nominations: Best Television Film and Rachel Ward for Best Actress for her role as Moira Davidson. Some critics, however, have called the movie one of the worst remakes of all-time, but that’s another story for another time. Right now I’ll ask you to please join me next week when I have another opportunity to force-feed you more unthinkable realities and unbelievable factoids of the darkest days of cinema, exposing the most daring shriek-and-shudder shock sensations to ever be found in the steaming cesspit known as…Horror News! Toodles! 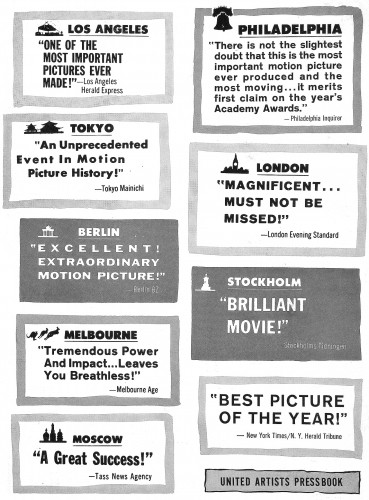