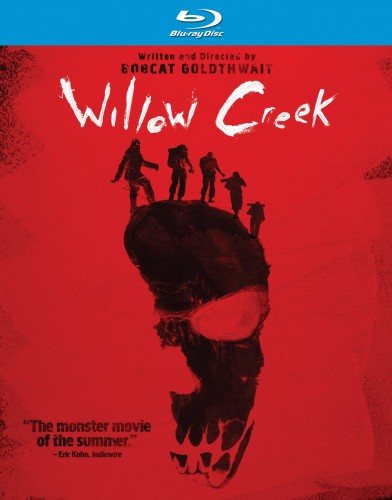 Jim and his girlfriend Kelly are visiting the infamous Willow Creek, the alleged home of the original Bigfoot legend – the tale of huge ape like creatures that roam the forests of North America. It was there that in 1967, the legendary beast was captured on film and has terrified and mystified generations since. Keen to explore more than 50 years of truth, folklore and hoaxes, Kelly goes along for the ride to keep Jim happy – while he is determined to prove the story is real by capturing the beast on camera. Deep in the dark and silent woods, isolated and hours from human contact, neither Kelly or Jim are prepared for what is hidden between the trees, and what happens when the cameras start rolling…

When I first heard about this film some months ago, I was decidedly nonplussed at the subject matter (Another Bigfoot movie. Big whoop). When I found out it was to be yet another entry in the found footage canon of films that have plagued me over the last few years, I’d decided that I was just going to skip it. I’m sincerely sick & tired of what the progeny of The Blair Witch Project (1999) has brought to the table and unlike my esteemed colleague, Doc Rotten (Who, for some godforsaken reason only he understands, is still a big fan), I just don’t care about them anymore. But upon the realization that this film was directed by Bobcat Goldthwait (Of whom I’m a big fan) and having seen a couple of pretty good found footage flicks so far this year (Afflicted & Wer), I thought that there might be something to Willow Creek.

And, saints be praised, I was right!

Although Goldthwait’s films are not your standard cineplex fodder, movies like Shakes The Clown (1991), Sleeping Dogs Lie (2006) & God Bless America (2011) are so offbeat & edgy, one has to take notice of his career. His films are both bizarrely unattractive & laugh out loud hilarious at the same time so his take on a found footage/horror film would just have to be fascinating by default. Even if it was terrible, it’d still be fascinatingly so. Willow Creek starts out by following the blueprint drafted up by Daniel Myrick/Eduardo Sanchez (Directors of The Blair Witch Project) 15 years ago and quite frankly, it’s sort of drab & staid for the first 30-45 minutes. Jim (Bryce Johnson) is an amateur filmmaker who’s itching to grab his camera and go into Bigfoot territory to seek out the elusive creature. His girlfriend, Kelly (Alexie Gilmore), tags along for what she believes is going to be nothing more than a nice drive & a few nights camping out in the forest with her favorite guy. That’s essentially it – 2 people, a car & a camera or two to document their journey. Goldthwait hems so close to how Blair Witch looks & feels that, for awhile, Willow Creek could pass for Blair Witch 3. 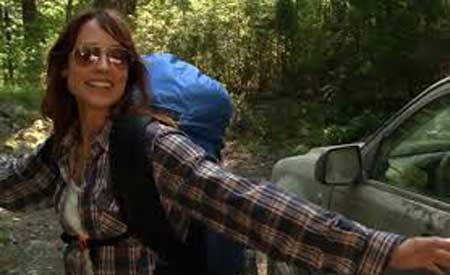 For the first half of the film, Goldthwait (Who also scripted) is content to lull his audience into a near comatose state as we dutifully follow behind the two main characters doing pretty much nothing. They plan out their trip, tell each other stories in the car as they drive and basically just talk. And talk. And talk some more. While this might sound extremely dreary (& in all honesty, sometimes it is), it is one of the tropes of the found footage genre. One of the biggest strengths of this film is that Goldthwait hired two extremely likable actors for his leads and his script makes them even more likable. I hate to admit it, but I found myself genuinely drawn in by their easy going manner and the genuine chemistry between the duo. Despite the fact that nothing much goes on for awhile in Willow Creek, I was fully invested in the light hearted conversations between Jim and Kelly and nearly forgot that I was watching a film about Bigfoot. 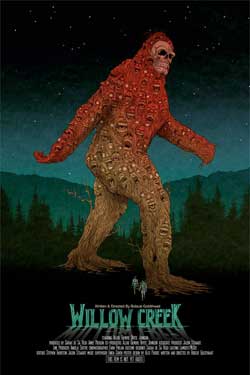 Although Jim & Kelly are pretty much in every frame of the film, there are a few characters they speak with once they arrive in the titular town. All of them are fairly affable and seem genuinely happy to share their tales of Bigfoot, save for the one gent who prevents them from continuing along the path they were told to follow. He’s not too happy to see them and minces no words as he warns them to turn around and forget about their quest so what do they do? They decide to go around him and follow an alternate course that’ll take them to the same spot where Bigfoot has been sighted. Bad decision.

As I said earlier, Willow Creek is really really slow for most of its running time. But since both Jim & Kelly are so damned likable, this isn’t as big of a problem as it might seem to be. Goldthwait’s script takes pains to make sure that his leads don’t do anything egregiously stupid or distasteful. There will be some of you who’ll decry this choice and while a character who existed just to contrast the affability of our happy couple might’ve spiced up Willow Creek a bit, the film moves along at a nice, steady pace without a knucklehead messing things up and doing stuff that would make the audience groan in disbelief. The film is brilliantly centered on them and no one else and Goldthwait makes the whole exercise feel like a home movie that your best friend made while on vacation. It’s deliberate pace lulls the audience into feeling safe & secure. But then they set up their tent for the evening…

I mentioned some of Goldthwait’s earlier films before and I think it’s important to stress that his cinematic vision is really different, daring even. Willow Creek starts out in the most mundane fashion imaginable and remains that way for nearly all of its running time but then we get to that tent scene. Before I continue, let me remind you that I’ve seen literally thousands of films (& that was just last week), I’m not trying to brag when I say I think I’ve seen it all but I think I’ve seen it all. But Goldthwait decided to do something in Willow Creek that I’ve never seen in a film before, at least not to the extent portrayed here. There’s a nearly 19 minute scene of Jim & Kelly sitting in their tent in the middle of the night with the camera set up directly in front of them, shot in very low light during which the couple start out talking aimlessly (Jim actually proposes to Kelly at one point) but start to hear odd sounds shortly afterwards. They ignore them and continue their banter but the sounds just get louder. And closer. And ever so slowly, Goldthwait turns the screws tighter & tighter, making both his actors (& his audience) more and more unnerved. Apparently he told them something would be happening outside of the tent as they filmed the scene but he didn’t tell them exactly what, so their ever growing fear isn’t staged. The tension & atmosphere in this scene is so thick you could cut it with a knife and as I watched it (At two in the morning in a pitch black living room), I felt like I was in that tent alongside of them, listening to those eerie sounds getting closer & louder. Quite frankly, I was truly terrified for awhile and since the actors didn’t exactly know what was happening outside of their tent, they were too. Johnson gets so scared he stares directly into the camera a few times during the scene, as if he’s trying to ruin it so that he could hear his director yell “CUT”. But the scene doesn’t end and his “1000 mile stare” is spot on. It’s one of the most audaciously daring scenes I’ve ever seen committed to celluloid and it’s genuinely terrifying to boot. 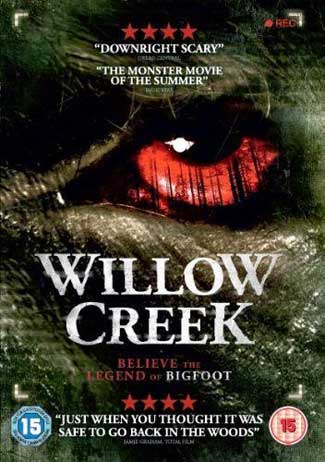 But how does it all end? Does our intrepid couple finally get out of that damned tent? Do they ever find any evidence of Bigfoot? All I can say is that the film kind of falls back on one of the more shopworn found footage tropes afterwards before culminating in…something really different. Some of you won’t understand it, some of you will flat out hate it, but I thought it was…something really different, something really unexpected & even a bit daring. Whatever you think of how it all ends, you won’t soon forget it and I’m guessing that’s exactly what Goldthwait wanted.

Willow Creek is a definite slow burn type of film, but the last 30 minutes make it an especially worthwhile one to sit through. It’s an eerily comforting horror film that’ll have you on the edge of your seat if you give it a chance to weave it’s spell on you. And at one point it’s legitimately the most terrifying thing I’ve sat through so far this year and since I’ve had to sit through duds like Oculus, The Quiet Ones & Devil’s Due these are words that I’ve been dying to say all year long. I think it’s a terrific little movie and one of the best horror films of the year.