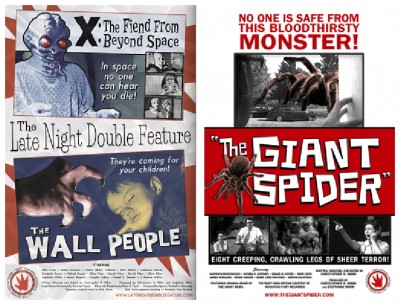 I’m awfully proud to announce a rather exciting event taking place in Sydney, Australia at the Skyline Drive-In Blacktown, Friday the 13th of June at 6pm, only AUS$10 a skull…I mean head (all profits go to Westmead Children’s Hospital) for my very special presentation of the Australian premieres of Christopher R. Mihm‘s The Giant Spider (2013) plus The Late Night Double Feature (2014)! 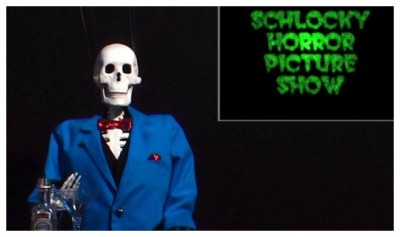 Do you miss the old-fashioned fun of piling bodies into the car boot and watching schlocky movies at the local drive-in? I know I do, which is why I’m dragging the schlock out of your living room and back outdoors where it can do its filthy business, and not on your carpet. I have arranged for your enjoyment not one, but two Australian premieres to be screened on Friday the 13th of June at 6pm, at the recently resurrected sixties-style Skyline Drive-In off Cricketers Arms Road in Blacktown, Sydney, Australia. 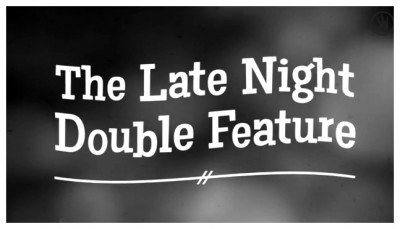 Be among the first to see The Giant Spider and The Late Night Double Feature – so that’s technically one and two-half movies – but at only ten dollars for you and each body in your boot, that’s a darn good-value night out. Well, the petrol getting there might be a bit pricey, but all profits go to Westmead Children’s Hospital, helping sick kids get better, so they can grow up to be tall posh skeletons just like me! So remember: Schlocky movies; Skyline Drive-In Blacktown in Sydney; Friday the 13th of June at 6pm; ten dollars a head; with me, Nigel Honeybone, the best thing to happen to drive-ins since the tinted window! 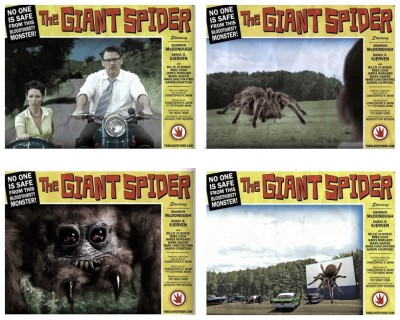 The Giant Spider (2013) is an enormous killer arachnid created by everybody’s favourite mutagen, atomic radiation, so it’s up to a trio of scientists, a general, a journalist and his squeeze to figure out how to stop the crawling terror before it devours them all! On the menu is Mike Cook, Billie Jo Konze, James Norgard, Mark Haider, Daniel R. Sjerven, Shannon McDonough and Sid Korpi, so grab the largest can of Raid you have and watch as these enigmas of the silver screen fight for their lives in writer-director Christopher R. Mihm‘s ode to the mutated bugs of yesteryear! It’s got a fantastic monster, perfectly selected music, clever special effects, a few good laughs and a whole lot of fun. For all you fans of Classic Restos out there – yes, both of you – he’s even got something in there for you too, a whole bunch of great old vintage cars, including an awesomely gorgeous classic motorcycle complete with sidecar! 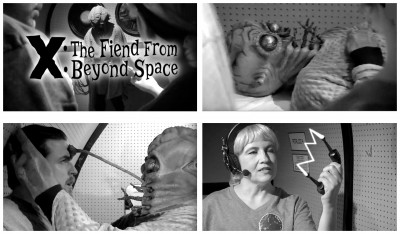 The Late Night Double Feature (2014) is a double bill of fifties-style B-grade movies from writer-director Christopher R. Mihm, the Nuevo-Retro King of ‘New-Yet-Old Good-Yet-Bad’ films. Part one is entitled X The Fiend From Beyond Space, which takes place during a decades-long mission to Alpha Centauri. The crew of the UESPA spaceship Endeavour are awakened from LD-sleep to find themselves in orbit around a rogue planet. Finding nothing but a seemingly dead alien on the planet’s surface, the Captain decides to bring it aboard for further study. But, the crew quickly realise the creature is not dead, and it’s very hungry. 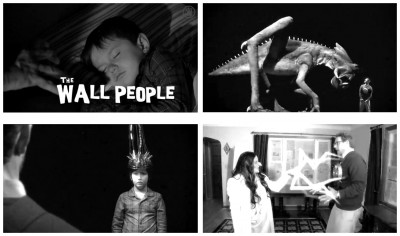 Part two is The Wall People, which focuses on a recently widowed scientist named Barney Collins (Douglas Sidney), who finds solace in his new role as a single dad to his only son. However, when the boy disappears from his bed under mysterious circumstances, Barney loses his grip on reality and becomes a shut-in. Eight years later, he resurfaces with a wild theory: His son has been taken by an otherworldly entity that steals sleeping children through inter-dimensional portals in their bedroom walls! He enlists the help of his old colleagues Doctor Edwards (Mike Cook) and Doctor Gabriel (James Norgard) to attempt to rescue his son from the clutches of this inhuman threat – or prove he’s certifiably insane!

By the way, both The Giant Spider and The Late Night Double Feature are now available on both DVD and Blu-ray from www.sainteuphoria.com 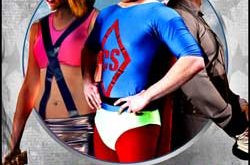