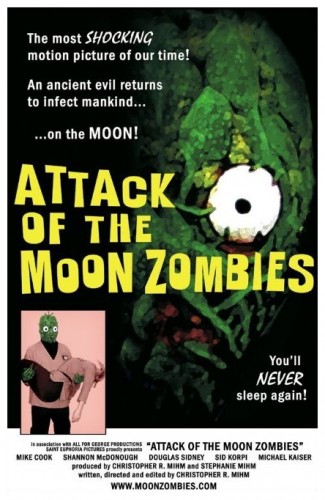 “Twenty years have passed since Dr. Vincent Edwards took on a certain radiation-mutated bat creature and he is ready to retire. While training his replacement on the Jackson Lunar Base, the two stumble upon a seemingly impossible discovery: alien plant life on the surface of the moon! Unfortunately, exposure to the spores of this otherworldly flora cause instant death. Too bad those killed by them don’t stay dead and instead, want nothing more than to replicate!” (courtesy IMDB)

This week I present to you one of the most incredibly implausible introductions to one of the…movies in the history of Horror News – that’s right, I’m talking about my fabulous introduction to Attack Of The Moon Zombies (2011)! It goes a little like this… 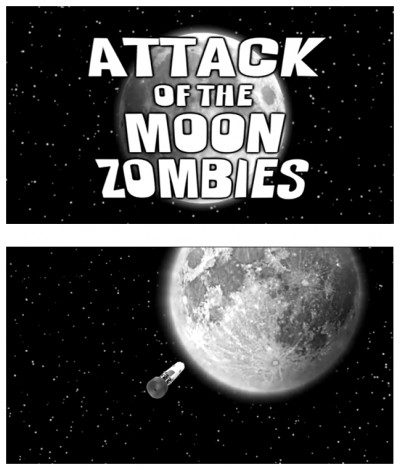 It may look like it was made in 1961 but don’t let that fool you. Made fifty years later than you’d think, by my old American friend Christopher Mihm, Attack Of The Moon Zombies stars Shannon McDonough, Mike Cook, Douglas Sidney, Michael Kaiser and my old sweetheart Sid Korpi, in a science fiction extravaganza that promises to go one better than Dinosaurs On A Spaceship, with zombies – on the moon! The crew of an isolated moonbase find themselves inundated with mutated monster-men and sinister space-spores! Despite the serious situation, it’s a loony lunar laugh-fest that lovingly lampoons low-cost movies while remaining remarkably respectful to those bizarre but beloved B-graders. So strap yourselves in and count backwards from ten, as we prepare for the coming zombie apocalypse – on the moon! 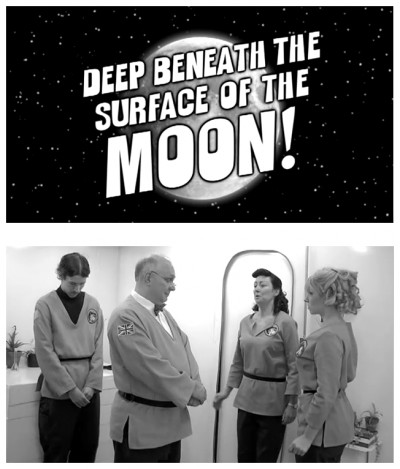 I’m very happy to announce that my introduction this week has been nominated for a Rondo Award for Most Gratuitous Alliteration In A DVD Review. If you see me on the red carpet, please help me back into my seat. Now to tell you exactly who and what you’ve been watching. Only you know why. Attack Of The Moon Zombies, Christopher Mihm’s sixth – yes, sixth! – movie in just as many years. He doesn’t mock the originals so much as replicate the organic elements that make these films so enduringly endearing – including their low-budget shortcomings and questionable talents – with 21st century sensibilities. This delicate balance of parody and homage is not easy, but Mr. Mihm is a master of this special brand of fifties-style satire, which has become its own sub-genre, as evidenced by films like The Lost Skeleton Of Cadavra (2001) and Frankenstein Versus The Creature From Blood Cove (2005). 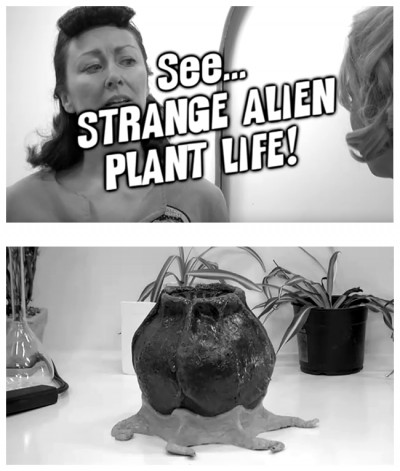 Without effecting the plot or pacing, there are plenty of references to fifties classics for you trainspotters out there: The Mole People (1956), The Thing From Another World (1951), This Island Earth (1955), The Day Of The Triffids (1962), The Green Slime (1968), and the subtly-titled It! The Terror From Beyond Space (1958). You may also recognise bits of Star Trek, THX-1138 (1971) and the Alien (1979) franchise. The real reason he chose to set the film on the moon was because it had nothing to do with any of his other films and, since the movie had to be shot during the winter, his choices were filming ‘in the snow’ or ‘in his basement’. Lacking enthusiasm for hypothermia or yetis, the basement was the way to go. Ordinarily, to create a moonbase you’d need a skilled crew and vast amounts of money, but if all you have is US$3,000 and five people with day jobs, the best you can hope for is a lot of duct tape and plywood. Fortunately, these are the same materials used by NASA so it’s perfectly authentic. 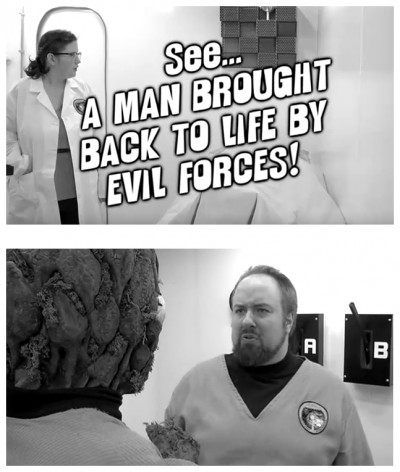 Just like the sets, the acting is also perfectly…wooden, and Shannon McDonough really shines in this aspect as the moon-based botanist, Doctor Hackett. Douglas Sidney plays her boyfriend, Doctor Collins, whose attempts at proposal are repeatedly thwarted. Mike Cook plays Doctor Vincent Edwards, the wise old professor days before retirement, who is training his young replacement Glen Hayes, played by Michael Kaiser. But my personal favourite is Sid Korpi as Commander Ripley. Born January 27th 1962, Korpi’s real name is Keanu but changed it to something less preposterous. A cold-eyed calculating expert in conspiracy, torture and murder, a master villain and head of the secret society known as the Si-Fan, she operates all over the globe, her aim being the ultimate domination of the world. However, her nefarious plans are repeatedly foiled by the stout British agent Dennis Nayland Smith…wait a minute, that’s Doctor Fu Manchu. Ah, here we go – Sid Korpi’s stage career was a series of hits and misses – mostly Mrs. I’ll explain: She played Mrs. Boyle in Agatha Christie‘s The Mousetrap, Mrs. Banks in Father Of The Bride, and Mrs. Gertrude in Steve Martin‘s Underpants…yes, that’s the title of the play. 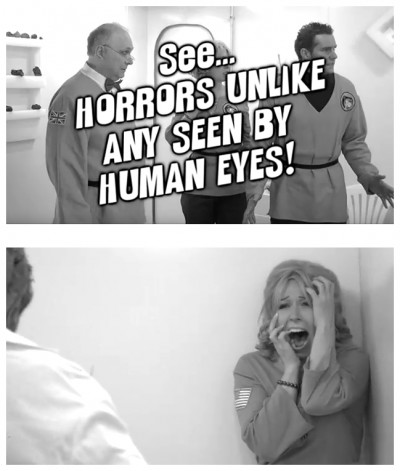 She was then kidnapped by Christopher Mihm and forced to appear in Attack Of The Moon Zombies, which earned her a nomination for a Dead Letter Award for Best Actress In A Zombie Movie. But that was a long time ago, way back in 2011. Since then she has appeared in at least two more films: House Of Ghosts (2012) and The Giant Spider (2013), both of which I hope sully your monitors with soon. The reason Attack Of The Moon Zombies looks sharper than Mihm’s previous efforts is because it’s been shot entirely in a controlled environment, making it easier to light and more consistent than the outdoor locations in most of Mihm’s movies. The low-tech sets, costumes, makeup and cast all add to the film’s considerable charm. The Moon Zombies themselves are perfectly realised, and look exactly as cheap as they should – simple masks and gloves – without ruining the scary bits…too much. 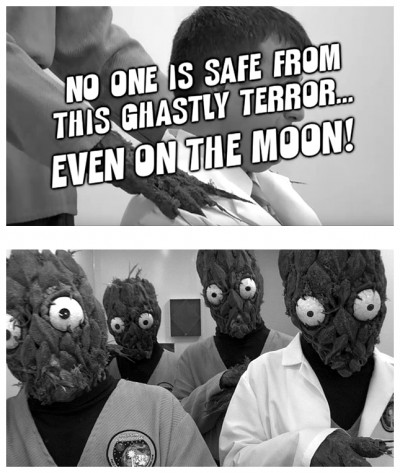 While Attack Of The Moon Zombies is a great introduction to the Mihmiverse, it’s worth watching all the films – found at www.sainteuphoria.com – and pay attention. Any fan of classic genre films is guaranteed to find a lot to like. And it’s with that rather masochistic thought in mind that I’ll make my farewells, and ask you to hit the highway to hell with me again next week while I drive you to delirium to witness another car crash on the boulevard of broken dreams for…Horror News! Toodles! 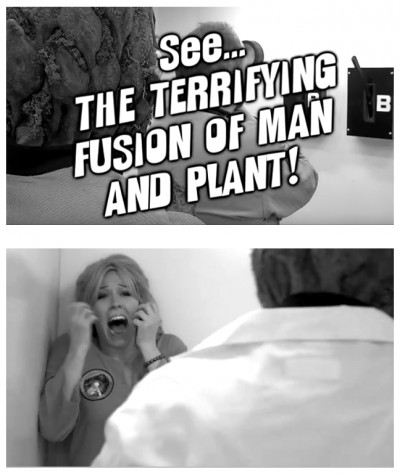