SYNOPSIS:
“It Came From Another World! chronicles the continuing adventures of everyone’s favorite a-rockin’ scientist Professor Jackson. First introduced in The Monster of Phantom Lake (2006), Professor Jackson (Josh Craig) finds himself tasked yet again with saving the planet from certain doom. When Professor Jackson’s colleague and best friend Doctor Frasier (Mike Mason) doesn’t return from a scientific expedition in the deep woods, the Professor is sent to find and retrieve him. While searching, the Professor and Canoe Cops Sven (M. Scott Taulman) and Gustav (Mike Cook) stumble upon an enigmatic meteorite that may hold the answer to Doctor Frasier’s disappearance – and something far more cataclysmic than they could ever imagine! Can our intrepid heroes unlock the secrets of the mysterious rock from outer space before its otherworldly power threatens not only the fate of the entire universe!” (courtesy IMDB)

REVIEW:
Returning with his signature fifties-style of filmmaking, Christopher Mihm looks to the skies in this week’s neuvo-retro science fiction thriller It Came From Another World! (2007) starring Josh Craig as everyone’s favourite guitar-slingin’ pipe-smokin’ scientist, Professor Jackson. Also starring Mike Mason, Shannon McDonough, with Mike Cook and M. Scott Taulman as the Canoe Cops, I’m moderately proud to present excitement, suspense – and canoes – in It Came From Another World!

This week’s fromage…I mean, homage, chronicles the continuing adventures of everyone’s favourite rock’n’roll scientist, Professor Jackson, first introduced to us in The Monster Of Phantom Lake (2006), which I had the displeasure of inflicting upon you recently. I have a theory: Independent filmmaker Christopher Mihm was inhumanely forced by his dad to watch cheesy fifties monster movies so, as a form of revenge, he started making similar films as a so-called tribute to his old man – but we know better, don’t we? He’s suffered his art, now it’s our turn. 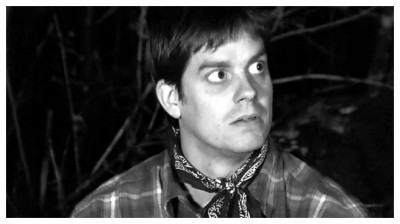 This purposely preposterous film is my second incursion upon the Mihmiverse, and signals the return of vaguely memorable characters like the intrepid Canoe Cops Sven and Gustav played by Mike Cook and M. Scott Taulman. There’s also Josh Craig, a student of the Shatnerian school of acting, who is both affable and laughable as Professor Jackson, and has a lot more dialogue this time around, all of which is punctuated with poignant pauses to emphasise key words. His delivery seems frighteningly natural, and is just one example of Christopher Mihm’s ability to squeeze authentic performances out of his actors – against seemingly impossible odds. It’s also a testament to his actors that they can maintain that motivation and a straight face from one film to the next. This offbeat humour becomes more endearing than funny, but it still makes me laugh. 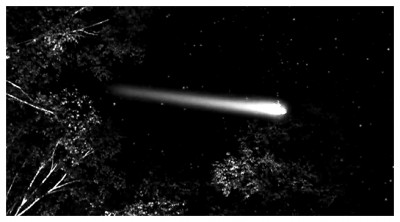 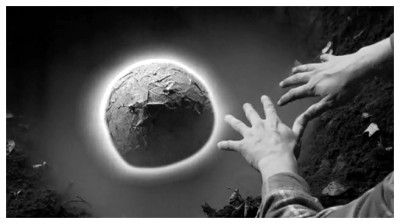 It Came From Another World! makes a significant advancement in several areas of Mihm’s movie making – editing, special effects, lighting, writing – the sorts of things that normally differentiates a motion picture from a train wreck. The soundtrack is a wonderful mash-up of vintage copyright-free music, and the costumes by Carol Eade and Miss McDonough all expertly blended to enhance the fun which is, of course, the most valuable part of this particular film experience. 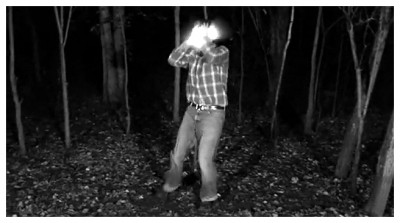 It Came From Another World! won the coveted Best Science Fiction Feature Award at the 2007 Shockerfest International Film Festival as well as the Best of Fest Award at the Big Damn Film Festival. Fest Award? Sounds like the wing of a hospital. So don’t forget to head over to the website to get more information or even buy your very own copy! Although that might encourage him to make more. Speaking of bargain-basement B-graders, allow me to invite you to step right up to Hollywood’s all-you-can-eat-but-can’t-stomach buffet and fill your plate with questionable Creative Commons casserole next week for…Horror News! Toodles!