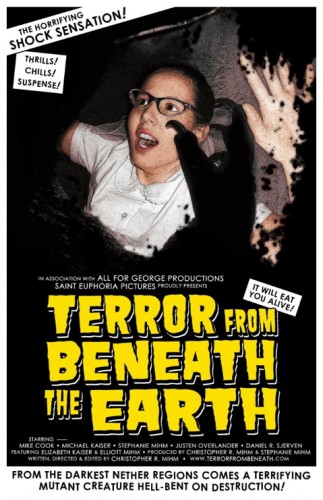 “After years of underground atomic testing, one of the animals living within the Wisawa caves (a system that stretches from Phantom Lake to the Deadlands) has undergone a radical and unimaginably horrible transformation! While exploring the caves, Dr. Vincent Edwards and colleague Rosemary Bennett stumble across evidence in the disappearance of local children. After reporting the find to the local sheriff, Dr. Edwards and Rosemary are tapped to lead a rescue attempt. Along with the sheriff and small-town farmer Stan Johnson (the children’s father), the rescue party quickly comes to the realization that if the caves don’t get them, whatever unseen terror lurking in the shadows just might!” (courtesy IMDB)

Prepare to gaze in disbelief as a terrifying mutant creature hell-bent on destruction rises from the darkest of nether regions, while a brilliant geologist and his young female colleague assist the sheriff and a hot-headed father to find two lost children, unaware that underground atomic testing has mutated a cave bat into a carnivorous…Terror From Beneath The Earth (2009)! Can the children be saved? Will the professor betray his scientific principles to destroy the mutant hell-beast? Can the rage of a distraught father be enough to overcome the paralysing grip of a radioactive man-bat? Could you ever imagine yourself asking such questions? I certainly hope so, otherwise the next ninety minutes will be terribly uninformative. 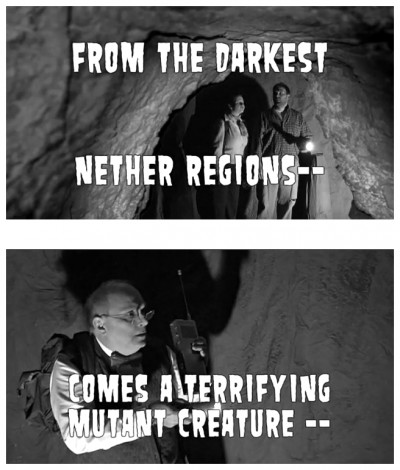 This is the fourth film in Christopher Mihm‘s masterful neuvo-retro tribute to the classic B-grade movies of the fifties, which began with The Monster Of Phantom Lake (2006), continued with It Came From Another World! (2007), and persisted wearily with Cave Women On Mars (2008). Just when you thought it couldn’t get any more terrifying – or earthy – or beneath you – I now present Terror From Beneath The Earth!

As I mentioned, Terror From Beneath The Earth is by Christopher Mihm, who makes new movies just like they used to be – crap – except he does a damn good job of it. Right off the – ahem – bat, I really like the titular Terror. He’s a cuddly mutant man-bat with bulging white eyes that remind me of the turgid turd-monster in Roger Corman‘s Creature From The Haunted Sea (1961). Alright, it wasn’t really called a turd-monster – but it looked like one – and just like in Roger Corman’s Attack Of The Giant Leeches (1959), the man-bat paralyses his victims and drags them back to his lair to keep them on ice until he feels peckish later on.

It’s something we need in our modern world of slick computer-generated monsters. We need to see the googly-eyed moon zombies and the papier-mache lake monsters. There’s a certain ‘specialness’ to these monsters that all the CGI in the world can never touch. The props and vehicles are authentic, the costuming always suits the period, and they simply look believable. The lair of the man-bat, for instance – sure, it’s got a flat floor and you can tell it’s not a real cave but, when you get caught-up in the action, you’ll find yourself suspending disbelief and, eventually, it feels like it’s a real cave…even though you know full well it’s only a set. It’s difficult to explain, but it’s an awesome achievement. Now, on to the acting talent. 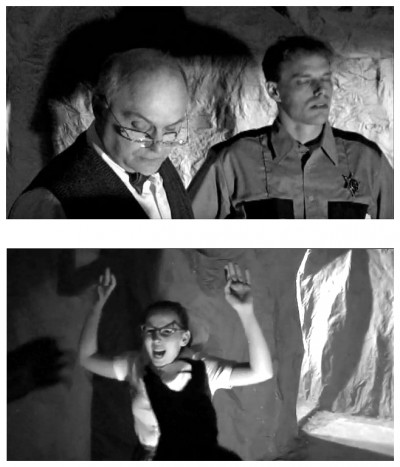 Daniel Sjerven plays Stan Johnson, the father of the two kids captured by the man-bat at the beginning of the film. I first saw Dan in Mr. Mihm’s previous film, Cave Women On Mars, and his natural performance really stood out – not all actors stand out when they’re surrounded by trees. The sheriff is played by Justen Overlander, who may be older than he looks, but still doesn’t look like an embittered seen-it-all cop. He also seems to have a deeper voice for some reason. I don’t know if he was doing that on purpose or if that’s his real voice, but sometimes he sounds like Christian Bale in Batman Begins (2005), or the Chipmunks covering Tom Waites. His comic relief…I mean, deputy is played by Michael G. Kaiser, who is utterly unbelievable and totally wrong for the part. He’s way too young and nerdy – as a deputy he makes Roscoe P. Coltrane look like Steve McGarrett. Fortunately however, Michael also plays the man-bat and he seems far more suited to that role. He doesn’t spend much time on-screen as the deputy anyway.

It goes without saying there’s also an excellent female cast gracing your television screen tonight. Do I have to? Oh, alright, I’ll say it: We have Elizabeth Kaiser as young Alice Johnson, and Rosemary Bennett is played by Stephanie Mihm, the director’s ‘special friend’ – they met on the casting couch, and Stephanie liked it so much she decided to stay. Needless to say, her only credits are in other Christopher Mihm movies. But the winner tonight with a total of twenty-one references on the Internet Movie Data Base is Shannon McDonough who reprises her role as Julie-Anne Saint-Marie Jackson from It Came From Another World! Some of her non-Christopher Mihm appearances include Problem-Solving The Republic (2012), Chalkboard (2011), Potpourri (2011), In Harm’s Way (2011), Thieves Like Us (2009), and Unholy Reunion (2009).

Chalk one up for the human race as they wipe-out another entire species. Surely there are other rare animals more deserving of such a fate – like the panda, for instance, which can’t even have sex without the aid of several Chinese zookeepers. When a species’ sole responsibility is to ‘get jiggy with it’ and couldn’t be bothered, I lose sympathy. Biologists are considering cloning them but, when you’ve got a room full of Mad Scientists copying an animal that was too stupid to exist in the first place, it isn’t going to be long before they start making new improved pandas with four arms and laser vision in high-visibility colours – and aren’t mystified by their own genitals. But enough of bears and their genitals – that’s an entirely different website. It’s time now for me to get off my soap-box and jump into my car, but not before inviting you to join me again next week for another suck on a celluloid saveloy battered to within an inch of its life, for…Horror News! Toodles!