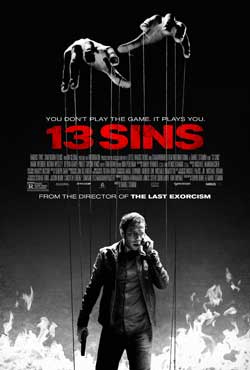 A cryptic phone call sets off a dangerous game of risks for Elliot, a down-on-his luck salesman. The game promises increasing rewards for completing 13 tasks, each more sinister than the last.

Since Richard Connell warped the man vs. man plot archetype in his 1924 short story “The Most Dangerous Game,” the thematic device of have-nots being treated as disposable, unwilling entertainment for those who have remains fertile ground for genre artists.  Direct cinematic descendents of Connell’s opus such as John Woo’s “Hard Target” and Ernest Dickerson’s “Surviving the Game” have concentrated focus on the action elements.  Others opt instead to pursue darker paths. 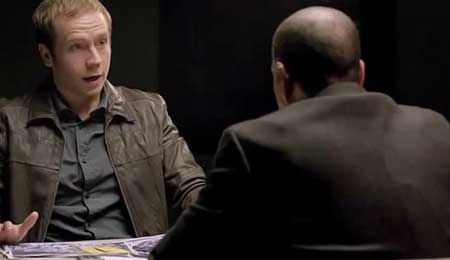 Within the last year alone we’ve had three vastly different and equally outstanding takes on the same central theme in “Would You Rather,” “Raze” and “Cheap Thrills.” Hot on their heels is “13 Sins” from Daniel Stamm, director of the overrated but wildly successful “The Last Exorcism.”  In his first departure from the found footage subgenre (his debut was 2008’s faux documentary “A Necessary Death”), Stamm and co-writer David Birke have adapted the 2006 Thai thriller “13: Game of Death.”  My search for the original was eleven minutes in vain, so I ventured into the remake an empty slate.  This, for the better part, bodes well for the new rendition, as I’m stripped of movie snob street cred. 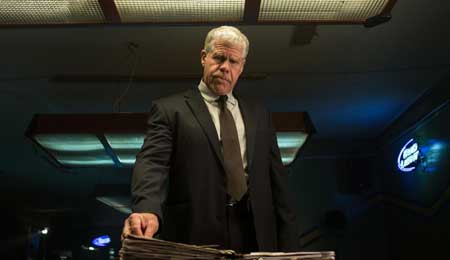 Affable sad sack Elliot (Mark Webber of “Scott Pilgrim vs. The World”) is having the worst day of his life when we meet him. His nuptials to expecting fiancée Shelby (Rutina Wesley, “True Blood”) just days away, he is promptly fired from his insurance sales job in a rather unnecessarily cruel berating.  His tribulations pile up, as his younger brother Michael and racist caricature of a father are facing eviction from their respective homes.  Devon Graye, whom you may recall as the teenaged Dexter, impresses in the role of mentally challenged Michael, and his bubbly rambling early in the film swiftly knocks out much-needed exposition.  Veteran supporter Tom Bower does what he can with the venom-spitting patriarch, but nothing short of a miracle could flesh out the elderly cliché. 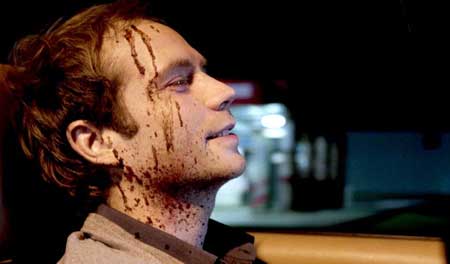 In the midst of a losing battle with a fly, Elliot receives a call from a jovial, nameless gentleman who offers him $1,000 if he kills the pest.  Elliot is at first understandably skeptical, until the voice on the other end begins listing personal details of his life, including the exact circumstances of his termination.  Within moments of swatting the fly, his bank account is credited with the promised funds and the phone rings again.  The next challenge is to eat the dead insect for an even greater sum.  He must complete eleven more tasks, otherwise he’ll lose everything he’s won thus far.  He agrees, believing he’s in for easy money and proving the theory that people in horror films have never watched a horror film in their entire lives.  Unlike our lead, we know exactly where this is heading. 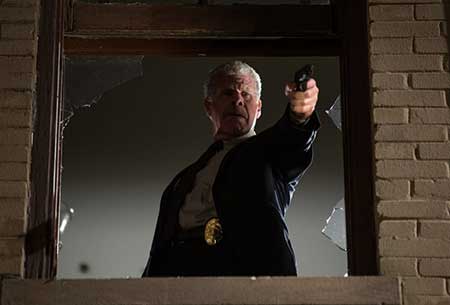 The stakes are raised progressively once the next day dawns, and “13 Sins” follows an amusing path throughout the midsection, led by Webber’s deadpan portrayal.  From making a little girl cry in the park to a coffee date with a corpse, he is clearly having fun with the exaggerated scenarios he’s forced to enact.  In a thankless supporting turn, Ron Perlman portrays Detective Chilcoat, whose investigation of Elliot’s odd disturbances leads to a possible worldwide conspiracy.  Held aloft by Perlman’s effortless charisma, these sequences serve up a king’s ransom of red herrings, but no real material of any consequence.  Pruitt Taylor Vince of “Identity” adds further class as Vogler, a man who once played the game and is close to uncovering its mysterious creditors. 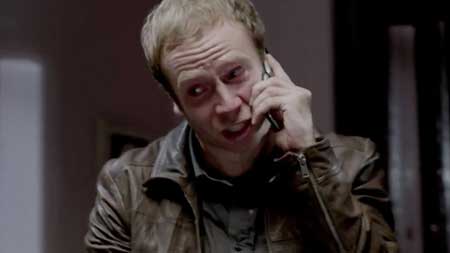 Following a chaotic outburst at his rehearsal dinner for further monetary gain, Elliot is arrested.  To stay in the running for millions, he is forced to take an officer hostage in an implausible escape attempt that rallies the film’s progressive downward spiral into an overwrought and depressing finale.  Though the violence certainly delivers the goods in the later challenges (one involving motorcyclists and razor wire is a corker), the anarchic spirit established from the beginning is absent.  Circumstances were bound to escalate of course, but similar-minded offerings “Would You Rather” and “Cheap Thrills” transitioned organically, never losing their initial vibes.  “13 Sins” completely abandons its tenor. 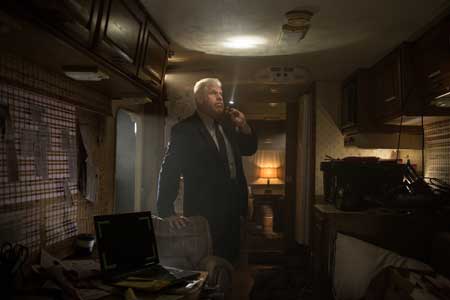 Stamm improves upon his skill behind the camera with each new endeavor, capturing the same frantic energy as David Fincher’s “The Game.”  Even as the film loses a bit of spark once things get ugly, it doesn’t drop the ball until the 13th and final challenge is revealed.  This results in confessed family secrets that should come as no surprise given their obvious foreshadowing, and a battle to the death that reads as not only ridiculously false, but callous as well.  Having no knowledge of the source material by Chookiat Sakveerakul and Eakasit Thairatana, I couldn’t say how faithfully this rendition adheres. It feels like a film maker’s attempt to alter a piece to make it his own, since the concept of “reimagining” as opposed to “remaking” (What the hell is the difference again?) is so very trendy.

For empty escapist fare, you really cannot go wrong with “13 Sins.”  It’s only when it asks us to think and actually care that it falters.  I’m perfectly cool with an unsettling and heavy-handed ending, if the motion picture in question has earned the right to drag me through it. This particular effort fell short of that.