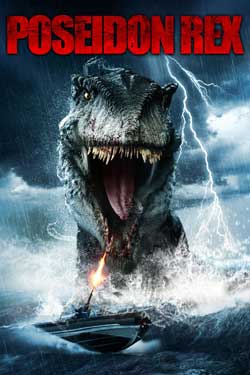 Amidst an underwater treasure hunt, a revived dinosaur emerges from the sea floor to terrorize a small island off the coast of Belize. 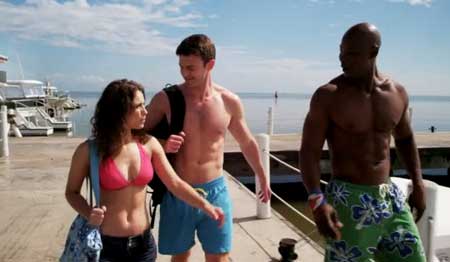 With a name fit for a Jean Claude Van Damme protagonist, Jax Slate (Brian Krause) is a scuba-diving treasure hunter. As he admits in the film, his line of work has connected him to some scary, fringe criminals. In particular, he owes money to Tariq (Gildon Roland), a Caribbean heroin dealer with one eye (get a patch on that thing, man!). While Jax is in the process of obtaining Tariq’s cash, he stumbles onto buried Mayan treasure, distracting himself from his debt problems.

He meanwhile winds up in the company of chesty marine biologist Sarah (Anne McDaniels), diver Henry (Berne Velasquez), and vacationing couple Rod and Jane (Steven Helmkamp and Candice Nunes). He asks them for their help unearthing the treasure and they agree to dive with him. But instead of underwater dabloons, they find the Poseidon Rex, a huge, vicious, deadly dinosaur roaming the ocean. 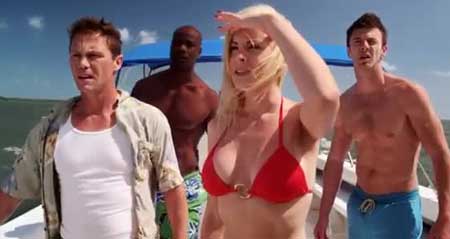 I know what you’re thinking. Dinosaurs are extinct. This sounds implausible. Well, as the scientist Sarah puts it: “Nautical tales of sea monsters are as old as humanity itself. Who knows what’s out there? I mean, for all we know, Poseidon Rex could have been hibernating for the past 400 years, or even the last 400,000. Maybe no one ever saw it and lived . . . ”

Call in the military.

A thin, obligatory plot to serve as a vehicle for tons of action? Yes. Count me in. 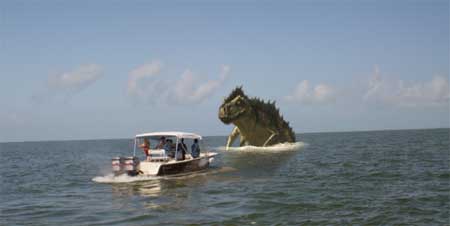 Poseidon Rex could, by all means, become a psycotronic favorite. I mean, it’s old school: it has a real Roger Corman/Samuel Arkhoff-produced feel to it. It’s unpretentious, formulaic–one-hundred percent entertaining. Mark L. Lester knows, if you’re going to go cheap, then you better go lurid. Because he goes lurid–big time.
This flick simply has nothing whatsoever to offer high brow viewers; it’s on these grounds that you’ll either love it or roll your eyes and walk away, returning to your contemplation of Louis Malle’s early work over a glass of whispy shiraz. Yes, there are inconsistencies in the plot. A lot of things go unexplained, such as why, exactly, a prehistoric beast is roaming the earth in the first place. But you don’t care because there’s good action and cheesy thrills from start to finish. Is the acting bad? Oh yeah. And that Como te llamas song . . .

Like the remake of Piranha, Poseidon Rex is, at its core, a tropical-spring-break-gone-awry movie. And, not surprisingly, there are some horribly unnatural, cringe-inducing party sequences . . . bro. But luckily, there’s a dinosaur to crash that bash, and the walk-on, vapid party boys’ line delivery halts before exhausting itself . . . babe. 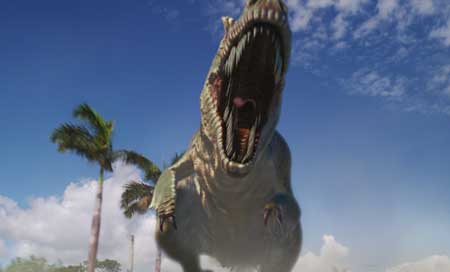 The creatures, despite their digitized artifice, look pretty cool. There is some terrific underwater, reef photography, as well. The speedboat chase scenes are too numerous to count. Guns, destruction, popcorn butter-slathered suspense: it’s all there. And when Anne McDaniels brandishes that bazooka . . . rapture.
In my favorite scene, Jax and Sarah experimentally hatch a dinosaur egg in a laboratory–while enjoying cold beers, of course, and not without making an Alien reference. They crack that sucker open and a small, baby dinosaur springs forth, terrorizing them ala Gremlins and Critters. Watch out! They barely manage to trap the young, vicious reptile in a mini-fridge before it’s too late. What chaos!

You can rest assured, there IS a sequel set-up at the end of the film.

All in all, if you long for movies like Carnosaur and Lords of the Deep, and have dug recent flicks like Dinocroc Vs. Supergator and Sharknado, then Poseidon Rex is right up your alley and ought not be missed. Really, it’s loads of fun. But if you feel like using your brain, PLEASE, don’t go cramping this flick’s style.