There are tons of independent filmmakers in the world today. Some of them are extremely talented while some of them quite frankly are not. P.J. Starks, based out of Owensboro, Kentucky, is one of the talented ones. In addition to making movies such as Hallows Eve: Slaughter on Second Street and others he also is the brainchild behind the “Unscripted: An Indie Film Xperience” film project and the River City Festival of Films convention. Needless to say he is a very busy guy and I was very fortunate to speak to him recently about his work, films in general, and several other topics. 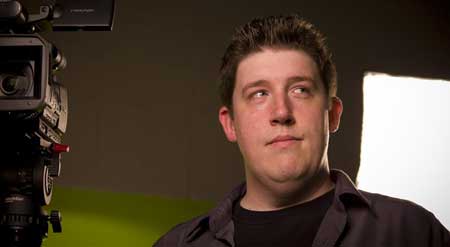 Below is my interview with him:

Todd Martin: How long have you been a filmmaker?

P.J. Starks: I’ve been messing around with a camera since I was about twelve, but I don’t officially consider myself having taken on the role of filmmaker until Hallows Eve: Slaughter on Second Street. That was my first serious foray into filmmaking and the first project I garnered some real press. Once I was able to Google my name, that’s when it hit me that I was doing something special.

TM: When did you decide that you wanted to be a filmmaker?

PS: I wanted to be a writer. I love telling stories and I’ve always been a lover of film. Once I married the two loves I thought it would be cool to try and be a visual storyteller. That’s how it all began and hasn’t stopped. My adult ADHD won’t let me stop. 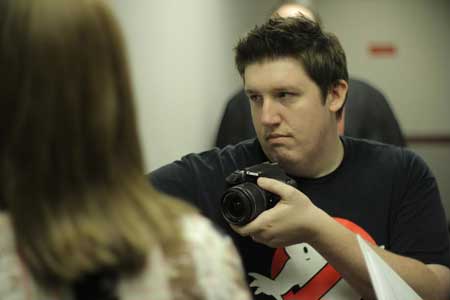 PS: I’m a huge Kevin Smith fan. Most of my freshman projects were dick and fart joke comedies. I still have a few ideas locked away that I plan to tackle. Zack Snyder is another one of my influences. Being a filmmaker isn’t just telling a story through the narrative process, but also through visuals as well. That man is a true visionary in every sense of the word. I’d love to achieve that status one day.

TM: You started the whole “Unscripted” film series. Can you tell us a little about it and when it started? Can you tell us about the River City Festival of Films which you were behind that took place this year as well?

PS:  Unscripted: An Indie Film Xperience stems from my love of DVD special features and wanting to help local/regional artists find an audience. It’s a six week indie film series that kicks off every Saturday with live music from a local musician. Then we screen independent films, much like your typical film series. But this particular event is anything but typical. Once we show their movie once, we then screen it a second time. Only this time the filmmaker will sit with the audience and conduct a live audio commentary. Almost like a DVD special feature come to life. It’s pretty cool and has become really popular in the area. So popular in fact that it has spread across borders and will soon start in Evansville, Indiana.

The River City Festival of Films is a whole other event entirely. It’s an actual festival that takes place most of a Saturday. It has everything; an events floor full over vendors, celebrity guests, seminars and two screening rooms showing local and regional indie fare. This past festival was year three and we hosted actor/director Peter Weller who’s currently on Sons of Anarchy. We had Dave Shuffett, who is a nine time Emmy Award winning host for KET, make an appearance and give a seminar about his career. We also hosted Sir Mo from WWE and Scream Factory artist Nathan Thomas Milliner. We had over thirty plus vendors attend. The event space was packed. It was an amazing time. I can’t wait to see what happens next year. 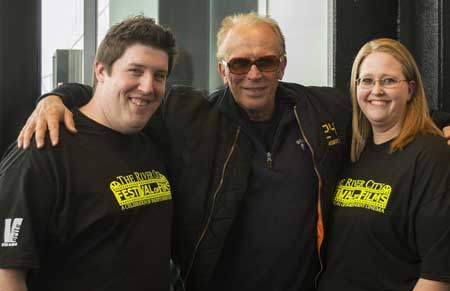 TM: Do you have a favorite film genre? Is there a certain type of film that you prefer making over others?

PS: I’m a fan of all genres except Westerns. I don’t know why, but there are maybe a few Westerns I like, but I can leave the majority. To me Back to the Future: Part III is an example of a good Western film. Horror and comedy are my two favorites, but horror will always be my first love. I’ve tackled several genres so far, but I always find myself wanting to go back to the horror genre. It’s the only genre that encompasses all genres into one fun package.

PS: We’re going to be here all day! I’ll name my top ten films that I love above all others. I don’t have just one. It would have to be Ghostbusters, The Return of the Living Dead, The Goonies, Brainscan, The Green Mile, The Monster Squad, Nightmare on Elm Street 3: The Dream Warriors, Shaun of the Dead, From Dusk Till Dawn and The Avengers. I’m also a huge fan of all the ‘80’s slasher films including the Halloween and Friday the 13th franchises with emphasis on My Bloody Valentine, The Prowler and Hell Night. I also love the films Crash and No Country For Old Men. Like I said, I could go on all day about all the films I love. Just come take a look at my film collection sometime, I stopped counting after I hit 1200 flicks.

TM: What do you enjoy doing when you aren’t making films?

PS: I’m a family man, so when I’m not working on any projects I’m hanging out with my wife and kids. Trina and I are addicted to reality food television right now, so we mostly do that. My oldest son Logan is nine and actually has a couple films of his own under his belt. They’re about his younger brother Connor. I watch a lot of TV and during the day I work at my soul sucking factory job. That about sums up my life. 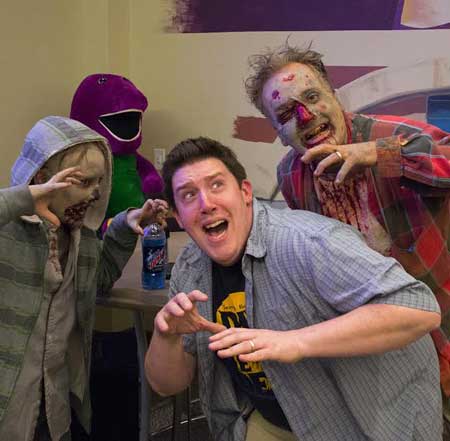 TM: Of all the movies that you’ve worked on which is your favorite and why?

PS: I’ve been lucky enough to tackle a lot of subject matter like zombies with Project Deathpack; the slasher genre with Hallows Eve and even family oriented entertainment with Into the World 2: A Toddler’s Tale, but my favorite film experience so far has been directing A Mind Beside Itself. It’s a psychological drama and allowed me to try my hand at something altogether different. It was also the first project where I only directed and nothing else. When you’re making independent films you become accustomed to don several hats to make sure a project get finished. With this project I had a very passionate and dedicated crew behind me. It allowed me the opportunity to focus on making the film exactly the way I envisioned. It was an incredible shoot. To this day I’m still very proud of the film.

PS: I’m in pre-production on my next horror feature called The To Die List that I wrote and plan to direct. It’s a heist thriller that goes horribly wrong when a masked serial killer shows up. I’m pretty stoked about it. I wrote a short horror script called Thirteen Past Midnight that I plan to revisit later in the year as a producer and I have my brother in film Jakob Bilinski pegged to direct. We’re about to start working on year four of the film festival as well as Unscripted 4, which recently became an annual event at the Daviess County Public Library. I’m sure that I’ll find my hand in several other projects along the way.

PS: I just want to thank everyone who has supported my bad habits over the past six years, most notably my wife Trina. At the end of the day I’m an idea guy, it takes the crew and cast to help bring my visions to life. I’ve made some incredible connections and friends during this journey and I cannot wait to see what the future holds. If anyone is interested they can check out my stuff at www.youutbe.com/veritecinemafilms and become fans of my events at www.facebook.com/UnscriptedXperience and www.facebook.com/TRCFF.

Special thanks to P.J. for taking time out of his busy schedule to speak with me!