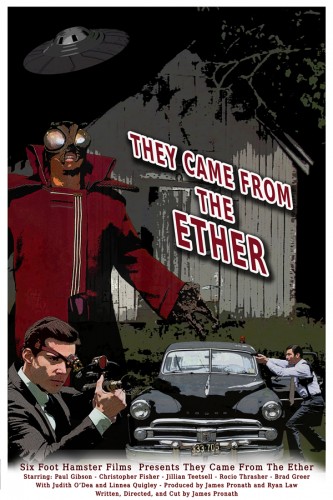 A door-to-door vacuum salesman named John Henry struggles to keep his job, his wife and his sanity until he encounters an alien who crash lands in a nearby field. Desperate for success, he agrees to sell alien technology to unsuspecting townsfolk until a rash of missing person reports leads Detective Mike Washurn back to their dastardly plot.

They Came From the Ether, from director James Pronath, is made for a specific audience in mind, those who love campy, low-budget old science fiction films from the fifties. The film also has a heavy influence of Ed Wood and a dash of Rocky Horror Picture Show. For this audience, the film is likely to be an absolute blast, a fantastic, goofy, throwback to a simpler time long-gone. For others, however, They Came From the Ether may be a bitter pill to swallow. The film is displayed in glorious black and white complete with cheesy special effects, tedious voice over narration and a convoluted alien plot to take over the world. The acting is all over the place, while many succeed in accenting the tone of the film, such as Christopher D. Fisher, Paul Gibson and Brad Greer; but, it is Judith O’Dea who steps into frame with a brief cameo role who steals the whole damn thing with a camp-fueled, darkly comedic version of Mrs. Kintner (Jaws 1975). Lighthearted, fun and well-intended, They Came From the Ether never fully gels to become the film it strives to be. 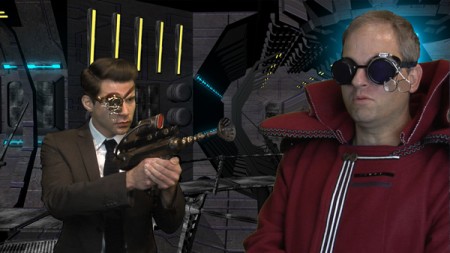 The script for They Came From the Ether follows John Henry (Christopher D. Fisher) a struggling vacuum salesman who, after loosing sale after sale and having his wife walk out on him, stumbles across a space ship that crash lands in a nearby field. After John encounters the ship’s pilot, he strikes a Faustian deal with the “Alien Master” (Brad Greer) agreeing to sell alien technology to unsuspecting townsfolk in exchange for success, money and a brighter future for himself, even if it cause Earth the human race. When the Alien Master later demands that John provide human for experimentation, the resulting barrage of missing person reports catches the attention of Detective Mike Washburn (Paul Gibson). The stage is set for a collision course with the future of the humanity in the balance. The film has all the key elements of this sub genre of film, the conflicted hero, the reluctant, disbelieving detective, the alien force that remains hidden from society. 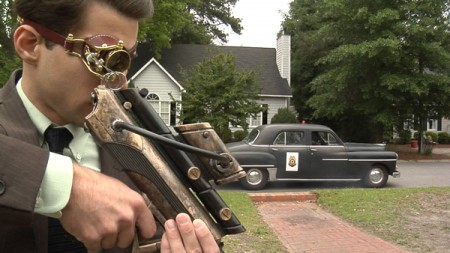 It is safe to say that the films of Ed Wood are a heavy influence on They Came From the Ether, along with other 50’s science fiction b-movie classics such as The Man from Planet X, Invaders from Mars and the like – with perhaps a little Robot Monster thrown in for good measure. Displayed in black and white, They Came From the Ether lives and breathes this era, for the most part capturing the style, cinematography, tone and locations of the film’s influences and time. It gives the picture a certain sense of charm and place. Combined with the comedic undercurrent, the film also maintains its Ed Wood style, construction and pacing. The film also throws in a little Rocky Horror Picture Show, a film also steeped in these sci-fi influences, when Brad Greer continually delivers all his lines sounding much like Riff Raff. He is just one “Time Warp” away from sealing the deal. 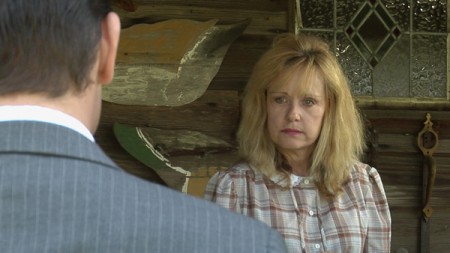 They Came From the Ether contains two delightful extended cameo roles that liven up the film. Linnea Quigley (Return of the Living Dead, Night of the Demons) seems to be having a great deal of fun playing the Widow Ann, an eccentric rural shop owner who first witnesses the flying saucer’s crash landing. She delivers the camp dialog with her usual playful attitude elevating the scenes with her personality. She also gives her role a healthy does of cantankerous southern charm, especially when she encounters Fisher’s John Henry. Judith O’Dea (Night of the Living Dead) provides the film with a wicked cameo role as Miss Clara, a grieving wealthy widow looking for her lost puppy. She steps in immediately taking over the scene instantly becoming the highlight of the film with her entertaining comedic turn. Both actresses are well utilized in the film with roles best suited for their talents and personalities, making them a little more than mere cameo, walk on, appearances. 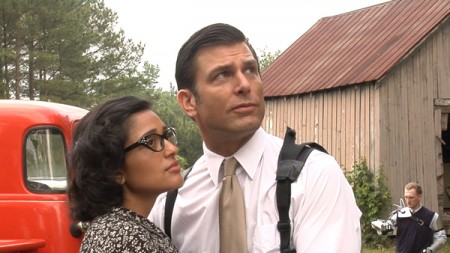 Christopher D. Fisher leads the cast as the conflicted John Henry, the down-on-his-luck salesman that makes a deal with the alien. He plays the role with an Ed-Woodian seriousness that drives the campy tone of the film. While his body language and dialog suggest a dead pan part, he eyes and subtle expressions reveal the playful fun of the project which help keep the character in the audiences good will. Fisher manages to give John Henry a sincerity, despites the character’s flaws, that the dialog and plot do not necessarily suggest. Paul Gibson does an equally good job with his role as the Detective although it seems as if he is ready to burst into laughter at any given time. A little distracting at first, the aloof behavior his breathes into Detective Washburn keep the character from wearing thin. They Came From the Ether could have used a little more Brad Greer as the actor comes across as if he has a lot more to offer to the role and film. He feels a little reserved, confined, giving the impression he is dying to go far over the top, much farther than afforded. 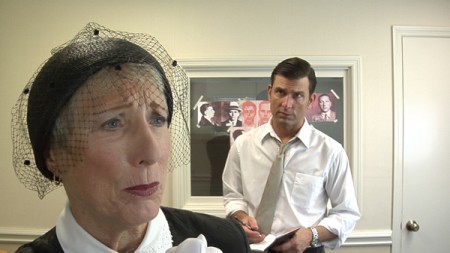 They Came From the Ether is bathed in its ambition and sincerity but never quite succeeds on every level. While purposefully cheesy, the effects work distracts from the film more than set the tone, either being too constrained by the lack of budget or trying too hard to achieve the land mark tones of Ed Wood. The choice to display in black and white benefits the film as does setting the story in the appropriate era of 1950’s rural US. A couple of outstanding cameo roles accent the film well and the acting, while across the board quality wise, lend well to the film’s influences and tone. Despite the honesty and the authenticity in director James Pronath and the film makers’ efforts, the film lands just a few yards from the finish line. For some, its target audience, the film will be a small gem. But for many, the aspirations in the tone and atmosphere will likely not be enough. They Came From the Ether needs more Ed Wood.