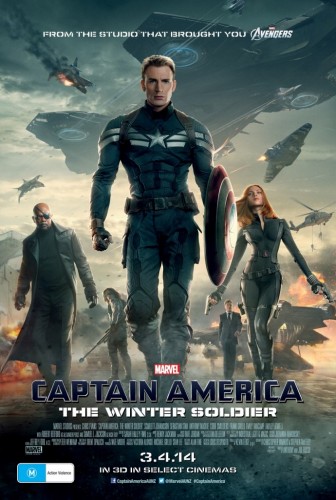 SYNOPSIS:
After defeating the alien invasion with the Avengers, Captain American/Steve Rogers slowly grows accustomed to the brave, new world around him making new friends in Sam Wilson and the Black Widow and finally learning to trust Nick Fury. When an old enemy reveals itself, with plans to remove millions of its enemies in one quick precision attack, it is up to Captain America to go rogue, against S.H.I.E.L.D. itself, becoming a wanted fugitive in order to save the world…again. But, one lone warrior stands in his way, the mysterious Winter Soldier.

REVIEW:
Captain America: The Winter Soldier is the first full-blown must-see film of 2014. After the mega-success of The Avengers (2012), Marvel Studios is beginning to slide into taking more risks with its properties while managing to stay safely within a comfortable distance from the formula they both created and perfected. Captain American: The Winter Soldier represents their best effort yet. It is their best film with directors Anthony Russo and Joe Russo handling the espionage plot and the emotional beats as well as the high super hero action the film demands. While it doesn’t have the ultra-level flash, pizazz and pure fun that  The Avengers displayed, the structure, the story and the characters and their conflicts are near perfect. The film is thrilling with everyone somehow in some sort of magically rarely achieved cinematic synchronization. Chris Evans embodies the patriotic heroism that permeates Steve Rogers heart while echoing his lost nature, his struggle to adapt to modern society, his idealism. Scarlett Johannson is given the opportunity to show what Natasha Romanoff is truly made of, her strengths and her fears. Newcomers to the franchise, Robert Redford and Anthony Mackie are welcomed and sensational additions. Captain America: The Winter Soldier is worthy of seeing – multiple times.

The film opens with Steve Rogers living in Washington, DC, running laps around Sam Wilson on the Smithsonian Mall. “On your left,” he says with each lap. The two become quick friends before he is whisked away by Natasha Romanoff, The Black Widow, with a mission to rescue a S.H.I.E.L.D. freighter from Algerian pirates lead by Batroc, the Leaper. But, when Steve discovers Natasha had her own secret mission, stealing secrets on board the ship to ultimately hand over to Nick Fury, he becomes suspicious of those closest to him and S.H.I.E.L.D. itself, disagreeing strongly with Fury’s method in protecting the world’s citizens. When Fury is later attacked by a mysterious assassin named The Winter Soldier, Nick must confide in Steve revealing that his secret organization has been compromised hoping that Captain America can step in and save the day. This is terrific, high tech, gadget filled, 007 inspired, Steranko fueled spy stuff. The entertainment can not be greater. And the rest of the script only makes the most of it with surprise returning characters, changes that effect the characters and the Marvel cinematic universe and character conflicts that challenge their emotions, their morals and the beliefs. Extraordinary.

The script is refreshing in how far in depth it decides to swim with opposing notions in how to best protect the world from itself. There’s Cold War tactics, Steve Rogers’ patriotic innocent ideals, Fury’s control with fear and knowledge and Romanoff’s do whatever it takes attitude. Regimes rise and fall, but the Black Widow remains standing, Romanoof reveals; she’s like that, she’s Russian. It is curious how none of the good guys can agree on what is the best solution, at least until Captain America takes the lead. “I guess you’re in charge now,” Fury concedes. Even more curious is how the bad guys also cannot agree on how they will gain the ruling hand. It is incredibly fascinating, the continual plays at power, what provides that power and how they maintain and protect that power. When Hydra steps in and wrestles the upper hand, the stakes are high – as high as they were when the Chitauri attacked New York in The Avengers, perhaps higher because only a few know the threat even exists, few less that the threat is mere minutes away from striking. This is cinematic espionage at its best, it is one Aston Martin DB5 away from a very familiar round of theme music – just with super heroes. Great fun!

The direction from Anthony Russo and Joe Russo is extraordinary. It is not entirely perfect, but it is damn close. At times, especially at the beginning, the shots and tone feel more “television” than “cinema” where the visual scope is somewhat limited. Later, characters during conversations seem to be standing around losing the theatrical rush and immediacy much of the rest of the film has. But, those are the “nit-pickiest” of nit picks and do little to distract from the entirety of the film and the experience. That is what these directors have created with Captain America: The Winter Soldier, an experience – like watching Dr. No for the first time or Raiders of the Lost Arc. What is most remarkable is how they balance all the diverse aspects of the film: the action, the drama, the plot, the conflict, the comedy, even touches of romance. More than the other Marvel movies, this film is the heaviest in plot with pieces moving about, reveals, misdirections and mistrust. Still Russo and Russo handle the action a well as any other super hero movie, Marvel or otherwise, whether its a fight on a falling S.H.I.E.L.D Helicarrier, an exhilarating car chase through Manhattan or a single fight between Captain American and The Winter Soldier. 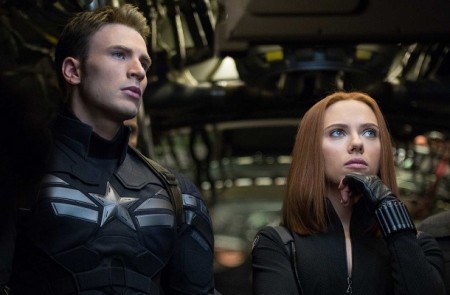 At this point it is difficult to imagine any one else as Steve Rogers, Chris Evans is Captain America. He continues to embody the personality, morality and spirit of the character to pinpoint precision. He even has the opportunity to revisit the 90 pound pre-serum Rogers in a flashback – a visual effect that remains creepy – just long enough to remind us of his origins and moral core. He is a hero with every breath not because of his strength, agility and speed, but because of who he is. Evans displays the innocence, the sense of justice, the patriotism with every speech, every glance, every decision. He will not compromise. There is no doubt in the other extreme personalities deciding to follow Evan’s Steve Rogers: Fury, Black Widow, the Falcon and Maria Hill.

Captain America: The Winter Soldier also represents the best use of Nick Fury in all the films thus far, even The Avengers, finally giving Samuel L. Jackson the opportunity to be more than the figure head of S.H.I.E.L.D – to step out from the shadows of the character’s secrecy to display his intelligence, his compassion and his resolve. He did so quite a bit in Joss Whedon’s film, but not as solo and as purposeful as he is able to here. Scarlett Johannson gets the same opportunity to grow and mature as her character is allow to soften, even if it is only in front or in support of Rogers. She is faced with choices that shape her character and reveal strengths, flaws and internal conflict. It is far more than most supporting characters are afforded. Robert Redford steps in to take on a role he has rarely played, the bad guy, giving Alexander Pierce a truly unique form of villainy. It is quite marvelous to watch Redford play this part to its fullest, chewing on the scenery but never going over-the-top, remaining reserved and composed to the bitter end. 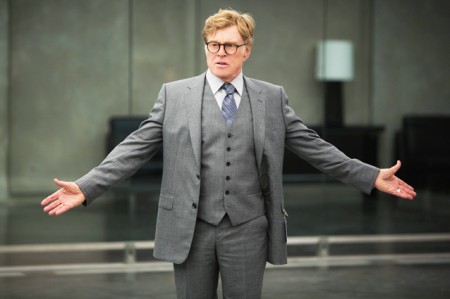 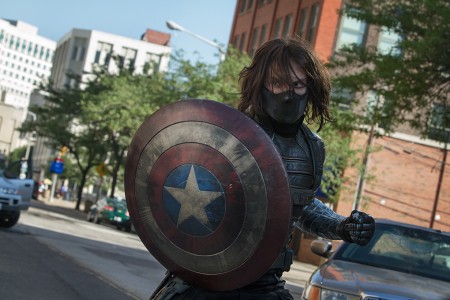