Home | Doug Bradley Invites You To The SCREAM PARK

Doug Bradley Invites You To The SCREAM PARK

Horror icon Doug Bradley has a new retro slasher heading your way, it’s titled SCREAM PARK and a press release showed up that breaks down the release, reveals the cover art and teases us all with a nice new trailer. Ready to check it all out?

Wild Eye Releasing is excited to announce that Cary Hill’s Scream Park will be available nationwide on DVD and VOD April 22nd. Hailed by Doctor Carnage Reviews as “creepy” and “bringing to mind Black Christmas and John Carpenter’s Halloween”, Scream Park was a hit at horror festivals throughout 2013, slashing to audience acclaim at Texas Frightmare Weekend, the Eerie Horror Film Festival and Horror Realm.

The Fright Land amusement park is on the verge of closing its doors forever. But the park’s owner, Hyde (Doug Bradley, Hellraiser), has one last plan to sell more tickets…murder. Hiring two backwoods maniacs to break into the park and hack and slash all his employees, Hyde thinks these killings will create a media sensation, but he has just unleashed a horror that no one can survive. 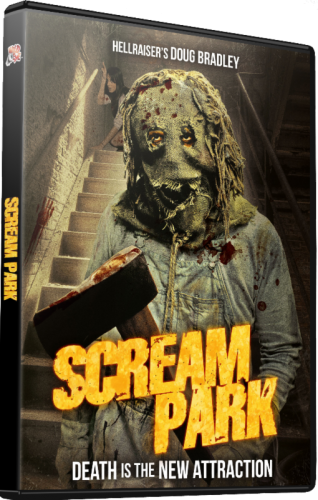