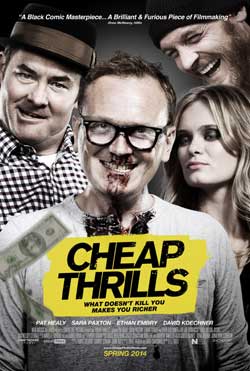 A scheming couple put a struggling family man and his old friend through a series of increasingly twisted dares over the course of an evening at a local bar.

Echoing classic episodes of Alfred Hitchcock Presents & Tales From The Crypt, director E.L. Katz‘ black comedy Cheap Thrills is a nasty little thriller that serves as a spotlight of sorts on the nature of greed, competition & the depths of human depravity. Considering the subject matter of the script (by Trent Haaga & David Chirchirillo), the fact that it’s as entertaining as it is makes for quite a pleasant (if gruesome) surprise. 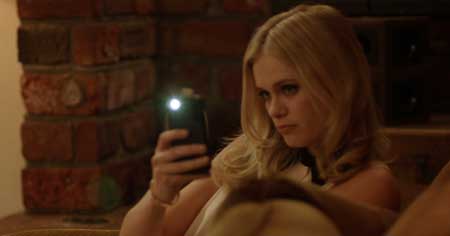 Craig (Pat Healy) forces himself to leave the kisses of his wife, Audrey (Amanda Fuller) & the confines of his bed to go to work but upon leaving his apartment he not only finds an eviction notice stuck to his front door but he’s also laid off from his job as a mechanic at a local auto shop. He doesn’t tell Amanda straight away though, preferring to meet up with old friend Vince (Ethan Embry) at a local bar for some drinks. While they’re chatting about the respective failures in their lives they meet eccentric couple Colin (David Koechner) & Violet (Sara Paxton) who are in the bar celebrating Violet’s birthday. Almost immediately, Craig and Vince find out that not only are the eccentric couple they’ve just met extremely wealthy, they’re also gamblers – but it’s not the sort of gambling that Craig and Vince are familiar with. 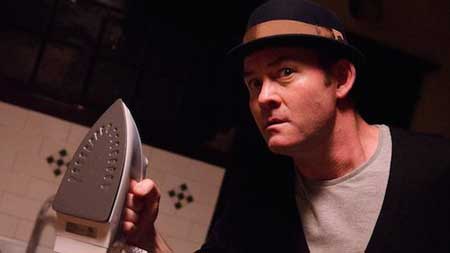 It all starts innocuously enough with a bet of which of the guys can get a waitress to slap him first but the nasty (& funny) script wastes little time getting to the darker aspects of the human condition and what truly desperate people would do for money, regardless of their pride, dignity or relationships. Craig is a failed author and it’s obvious from the look on his face as he’s being let go from his mechanic job that he feels like his failure as a husband/father is now complete. Healy gives an especially measured yet manic performance here as Craig, who faces most of the indignities heaped upon our unlucky duo. Embry’s character was a bit more problematic for me since I disliked him as soon as he appeared onscreen, he just feels like a scumbag from the get go but that’s the way the character was written and Embry embraces the inherent distaste the character inspires fully and impressively. 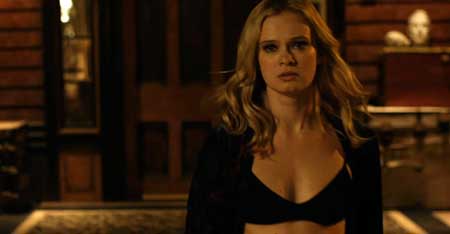 Sara Paxton’s character doesn’t do too much in the film besides sit extremely still and watch while the guys attempt to win wagers that get more and more distasteful but her silence belies a power over those gullible enough to be swayed by what she & her husband are putting down. She displays this power during one scene in which Craig is offered a tidy sum of cash if he’ll have sex with her immediately. Craig initially demurs but the lure of money and Violet’s come hither stare break him down and as she mounts him, Violet’s furtive glances at both Vince and her husband during the act exemplify a woman who’s used to being on top…and in total control. 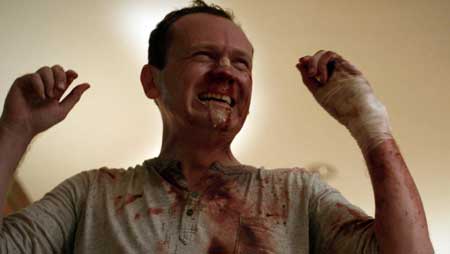 But it’s David Koechner’s performance that lifts Cheap Thrills to a higher plane. Known more for his comedic roles (Anchorman (2004) & Anchorman 2 (2014) he gives a truly nuanced & more than slightly scary performance as Colin. His facial expressions never really change much from looking bored to being really excited but there’s a palpable sense of menace in every line of dialog that he recites that makes him far more dangerous than his appearance might suggest. Together Koechner & Paxton might look to be mismatched on a visual level but as the film progresses you’ll realize that they’re perfectly cast and truly memorable indeed. The way they hold each other hands during one of the more intense scenes in the film is especially telling, their hands are trembling excitedly as they get closer together and once together all sense of tremulousness is gone as they squeeze together tightly as if to congratulate each other for managing to debase two more people. 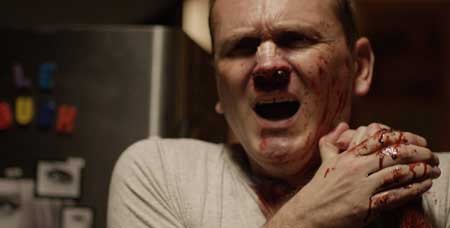 The wagers that are placed during the film are things I’ll leave to all of you to discover but if you’re familiar with the previously mentioned anthology series then you know all about one of them (although this time it’s a good sight gorier than ever produced before). There’s also one especially stomach turning wager that reminded me of a similar scene from Theater Of Blood (1973) which featured what I consider to be Vincent Price’ greatest film performance of all time. This film gets especially nasty at times, and I mean really, really nasty. Forewarned is forearmed I always say.

Director Katz has a nice sense of shot composition and it comes across even thru the handheld shaky cam scenes that some might find mildly annoying. Cinematography by Andrew Wheeler & Sebastian Winters is smooth and takes advantage of the dim lighting throughout most of the film to give an especially unnerving aura to the proceedings. Scripters Haaga and Chirchirillo have taken a tried and true formula and upped its ante until it becomes a scary, but funny, slice of pop entertainment that sadly probably won’t be recognized as such by the public at large. Either way, Cheap Thrills is a really good film that walks a tense tightrope until its oddly endearing finale and it’s well worth your time if you’re in the mood for something especially macabre but low key.