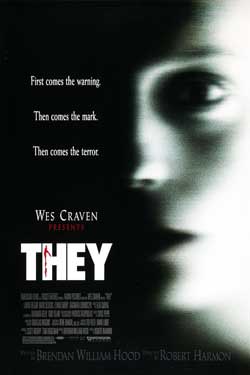 After witnessing a horrific and traumatic event, Julia Lund, a graduate student in psychology, gradually comes to the realization that everything which scared her as a child might just be real…

Comedian Eddie Murphy had a great bit on one his earlier albums in which he described the difference between a white family moving into a haunted house & a black family moving into that same house. The white family moves in and hears a spooky voice warning them to “GET OUT”! They immediately say “Cool! Let’s move in and find out where the voice is coming from”! The black family goes in the house & marvels at how beautiful everything is, “Oooh, look at that staircase! What a lovely kitchen, etc” Then suddenly they hear “GET OUT”! and the next words out of their mouths are “Too bad we can’t stay”! “They” is the cinematic equivalent of that bit of monologue. 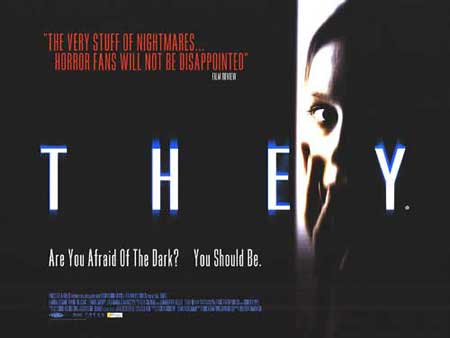 Billed as “Presented by Wes Craven” upon it’s original release, “They” tells of a group of young adults being hunted by the things that go bump in the night that they were scared of when they were children. Do you remember the little sounds that all of us have heard as children while we were trying to go to sleep in our rooms in our (All of a sudden) amazingly dark bedrooms every night? The way you couldn’t stop staring at the door to your closet in the middle of the night that was ajar when you KNOW that you had closed it before you went to bed? You just knew that the same thingies that opened that door were the same thingies that were making those odd little sounds at night. And god forbid if you heard something rustling around under your bed…

Well this film purports to explain to us exactly what the source of all our childhood fears of the dark stem from. It begins with a nifty little scene in which a young boy is put to bed during a storm by his mother & she reassures him that there’s nothing to be scared of, it’s just thunder and lightning making all of the errant sounds in his room. She leaves the door to his room ajar & shuts off the lights, he starts hearing sounds and notices his closet door is slightly open as well. All of the shadows in his room are looming shapes of dread in his eyes as he thinks he sees a shape in his closet that doesn’t seem too kosher. As it moves towards him he does what most kids would do, he hides under his blanket with his trusty flashlight to provide a beacon of hope for him till his mom arrives to save the day. Of course she doesn’t and of course the flashlight dies on the poor little creep and of course he decides to take a peek outside of the blanket that has become his comfort zone. And of course that’s when somethinggrabs him by his feet and drags him screaming into his closet, never to be seen again…

Cut to some 18 years later and we are introduced to the lovely Julia (Laura Regan) and her small coterie of friends. Julia is a psychology student working on her thesis when she gets a call to meet one of her friends at a local diner. Once she arrives he tells her that “They” are coming to get him and then they’ll be after her. He then proceeds to shoot himself in front of her rather than face whatever he believes is coming for him. Now what exactly are “They” and why was he so convinced that they were coming for him & now Julia? Well they are not really seen as much as they are heard but what you can see of them is creepy enough. They look sort of like spindly grey spider creatures with ill defined human features, but I have a feeling that if you ask 10 different people they’ll give you ten different descriptions.

But I think that’s a good thing actually and it works for this film since no one is really sure what they are or what they want. They seem intent on dragging their victims back into their world, a dark & slimy dimension that can be seen by their intended victims in a mirror. They are after Julia because as a child she was a victim of night terrors & through therapy she was convinced that the creatures she saw were figments of her imagination. Without her belief in them, they could not get her. But now they’re back & they want her very badly. It’s a pretty scary idea for a movie and the opening scenes are really effective. 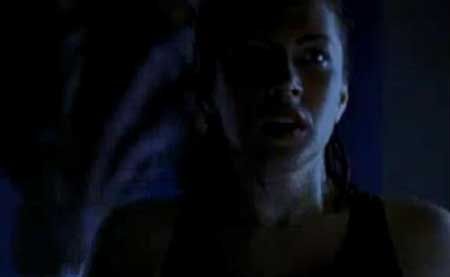 But “They” runs into problems as it continues. Mainly that the characters are incredibly stupid people who do really stupid things in order to move the story forward. I’ve complained about this before, characters who enter dark rooms without turning on a light, characters who run upstairs to escape from the bad guys instead of running out of the front door they’ve just ran past…that kind of thing. Real people just wouldn’t do this sort of thing, hence the Eddie Murphy quote at the beginning of this review. They wouldn’t try to “Investigate” the strange sounds that seem to be getting closer to them. They wouldn’t go into dark rooms/corridors and then use a flimsy lighter to light the way for them. There’s one especially annoying scene in which Julia decides to leave her boyfriends home (In the middle of the evening) and run straight into a deserted subway station…why? Who does stuff like that I ask? Most, if not all would stay right where they are with someone they trust, they wouldn’t just go off into a subway station at night (And I worked on the NYC subways for 15 years acolytes. I know from whence I speak). Another scene has her opening up a medicine cabinet and seeing into the netherworld that “They” live in. Rather than call her boyfriend to see for himself or just close the friggin’ door shut she decides to stick her hand into it and pull out a nasty looking grey slime, then she gets a gander at what they look like. Who does this in real life? I know that this is pretty much a standard trope of films of this ilk, I mean if people didn’t do stupid things then the movie would last 10 minutes. So stuff like this has to happen, but I don’t have to like it. Especially in what started out as a pretty creepy little movie. 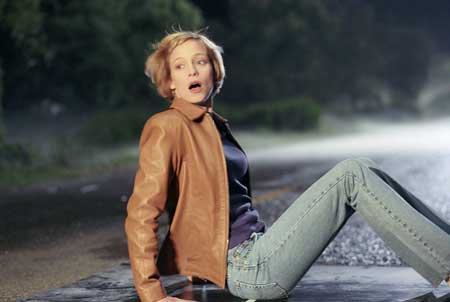 The film tries to justify her utterly wrongheaded reactions by trying to make us believe that all of these creatures are in her head again. But it doesn’t explain why the other victims are having the same hallucinations or why these figments of their collective imaginations are made flesh. The ending is also something of a head scratcher that would seem to eliminate the idea that she’s imagining all of these creatures but doesn’t tell us what their motivation is beyond just grabbing her up & dragging her into their dimension. Granted it’s an especially grotty place to be dragged into but a mop & some Mr. Clean would make it all spiffy in a few hours I reckon.

It’s the indecisiveness of the script that ultimately makes “They” fail. It certainly has it’s moments but it doesn’t build on them. It just dumbs down it’s characters and kills the scares right off of the screen. All of the principal actors are effective enough and Laura Regan is an especially attractive actress who deserves better than this. Director Robert Harmon (The Hitcher) keeps the goings on going on in a no nonsense manner & Patrick Tatopoulos’ creature design, while not well seen, is effective enough in small doses. Anke Bakker’s sound design is especially well crafted and really helps to sell the idea of what the creatures MIGHT look like. But it’s all much ado over nothing in the end thanks to the dodgy script by Brendan William Hood. 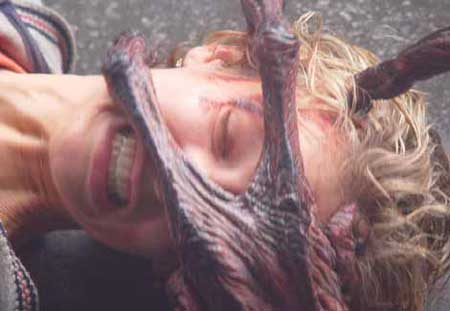 So should you see “They“? Ehhh, despite the stupidity of most of it after the first 30 minutes it did manage to hold my interest. I was hoping to find out what these creatures were but I suppose the mystery of never really finding out helped make them that much more terrifying. It’s good enough to watch if there’s nothing else around and it actually might creep out those of you who have a really serious fear of the dark & what might be waiting for you in it. If you fit that description then “They” might be for you. If you’re a fan of films featuring giant man eating ants please don’t rent this thinking it’s a sequel to “Them”. You’ll be really disappointed… 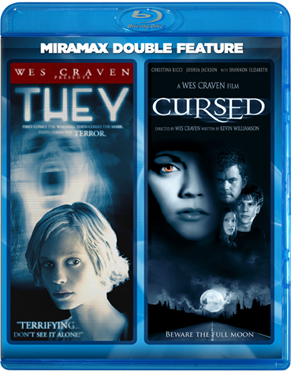 They is now available on Bluray per Echo Bridge Entertainment