Home | Your Wish is Granted – The Monkey’s Paw to Bluray

Your Wish is Granted – The Monkey’s Paw to Bluray 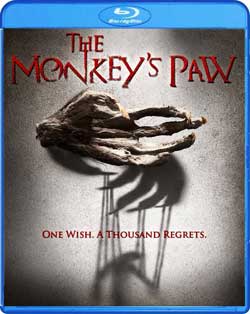 One wish. A thousand regrets. Scream Factory presents The Monkey’s Paw from Chiller Films on Blu-ray and DVD on June 17 with bonus features including behind the scenes footage, a theatrical trailer, and commentary with director Brett Simmons, cinematographer Scott Winig, and actor CJ Thomason.

After Jake Tilton (C.J.Thomason, Sutures) acquires a mystical “monkey’s paw” talisman that grants its possessor three wishes, he finds his world turned upside-down after his first two wishes result in his malevolent coworker, Tony Cobb (Stephen Lang, Avatar), being resurrected from the dead. When Cobb pressures Jake into using the final wish to reunite Cobb with his son, his intimidation quickly escalates into relentless murder – forcing Jake to outwit his psychotic friend and save his remaining loved ones.

TO BE RELEASED ON DVD AND BLU-RAY