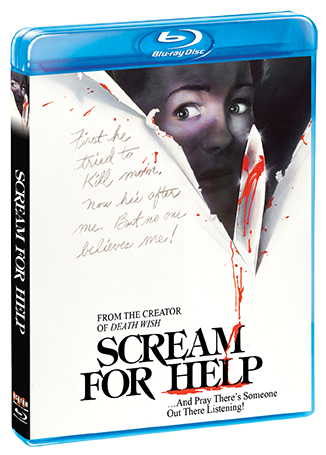 The elusive 80s thriller Scream for Help is making its long-awaited Blu-ray debut on September 18th, 2018 from Scream Factory! Directed by Michael Winner (Death Wish, The Sentinel) with a score by John Paul Jones (Led Zeppelin), Scream for Help comes with a number of brand-new bonus features, including a new 2k scan from the original film elements, new audio commentary by the Hysteria Lives, a new interview with writer Tom Holland, and a new interview with actor David Allen Brooks. Fans can pre-order their copies now by visiting ShoutFactory.com

Terror invades an upper-class New York community as 17-year old Christie Cromwell cleverly uncovers her stepfather’s horrifying plot to murder her wealthy mother. She’s on to him, yet no one will believe her because she’s just a kid: smart, imaginative, maybe she’s just taken a crazy idea to the limit. Suspense builds when a series of shocking events confirms her worst fears. Alone, afraid and helpless, terrified Christie and her mother are held prisoner in their own home at the mercy of ruthless killers.