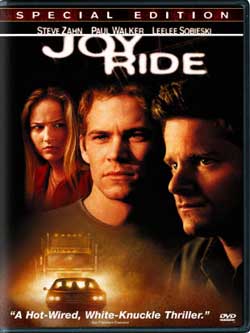 Three young people on a road trip from Colorado to New Jersey talk to a trucker on their CB radio, then must escape when he turns out to be a psychotic killer.

With this being the age of the internet, many people think that they can hide in the shadows of a fake name and not be held responsible for what they say, in a sense Joy Ride is a morality tale that tries to help disprove that. Joy Ride makes you believe that even if someone can’t see your face or know who you are, that they can still find you. 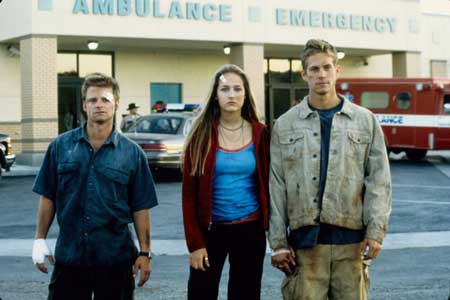 The movie starts off with Lewis (Paul Walker) talking on the phone with his “friend” Venna (Leelee Sobieski) about what each other is doing over the summer break from college, Venna wants to come back home , so Lewis refunds his plane ticket for some money to buy a car, thus being able to go pick her up. On his way to get her, Lewis receives a phone call from his mother, his brother has landed in jail again, and it’s up to Lewis to bail him out. He bails out his brother Fuller (Steve Zahn) and now the brothers are back together for the first time in years, which means it’s time for a little fun.
At the next rest stop Fuller buys a CB radio and has it installed in Lewis car, at first the CB just seems like another tool to help them out on their long road trip, but sometimes you can get board and make some bad decisions.

How can they do that? Well how about trying to play a joke on a trucker named Rusty Nail by disguising their voice to sound like a woman named Candy Cane. The joke seems to be harmless, until the brothers make it to a motel, where another guest is seemingly rude to Fuller, so why not ask their new trucker pal Rusty Nail to meet up with Candy Cane for a night of fun, but giving him the wrong room number. After a single thump and a call to the manager, where they find out everything is supposedly fine, the room next to theirs remained silent throughout the night. The next morning is a different story, the cops come knocking and have a few questions to ask the brothers. The answers they get come with a hint of unease. So the police take the brothers to the hospital where they get a chance to see just what had happened to the man in the room next door. 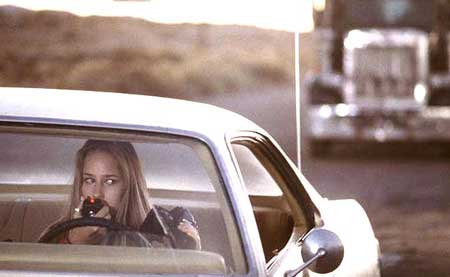 This is the first time that the brothers think that they might be in trouble, but that slight fear soon becomes a reality as Rusty Nail gets back in contact with them. They try to come clean about the joke over the radio with him, but their confession isn’t enough for the trucker pushed past his breaking point. The rest of the movie is a cat and mouse game between the trucker and the brothers and eventually Venna. There are plenty of false truths and traps set up to keep you truly interested until the last twist is presented.

The first time I saw this movie it surprised me with how well it was done, suspenseful and gripping with characters that are fun to watch. The relationship between Fuller and Lewis is played out great, Lewis being the younger still seems like he wants to impress his older brother by doing what he says, bringing back memories of when they where kids together. But Fuller plays the terrible older brother, instead of looking out for his younger brother, he lets him get in trouble and even tries to steal the girl from him. But all in all what more could I expect from one of the newest up and comers in the movie biz, J.J. Abrams writes along with Clay Tarver, but neither direct, that position was held by John Dahl. All three together made a very interesting and thrilling movie. 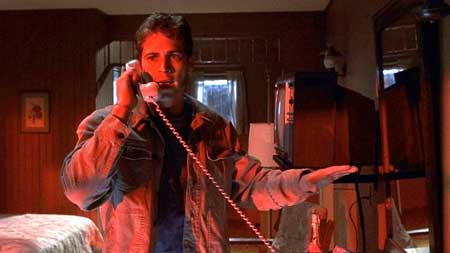 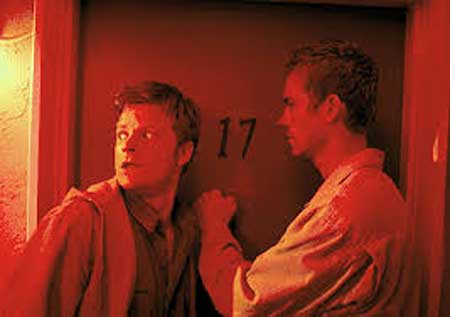 But with the good also comes the bad, the only thing that I thought could have been better is the truck driver, the person, not the voice. They keep him in the shadows and tucked in the big rig for most of the movie, but when they do finally show bits and pieces of him, he comes off as just a regular guy, nothing special about him. I know that not every killer needs to be of some occult nature, but they made him seem like he was more than just an average man. 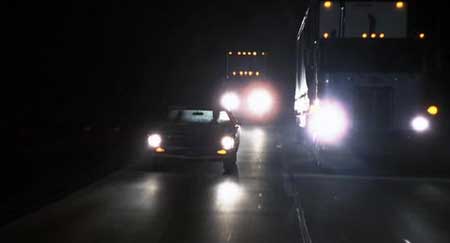 If you watch this movie and feel like you just need more of Rusty Nail and his twisted games, then you’re in luck since there is a sequel to this movie; Joy Ride 2: Dead Ahead. Now this movie has a whole new cast (both actors and writers/director) so if you’re looking for the same type of entertainment, you might have to look elsewhere. And if you’re a real glutton for this sort of thing, then keep your eyes out for Joy Ride 3 coming out later this year. With all that said, you’re probably better off just sticking with the original, it might not be the goriest of movies, but it’s a fun film to watch.