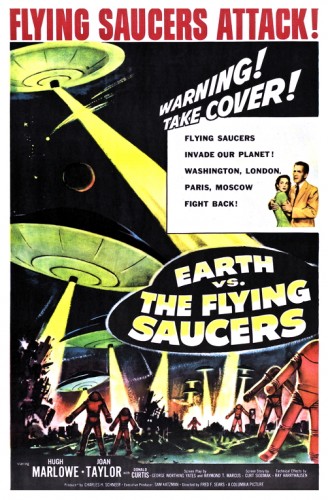 SYNOPSIS:
“While driving through the desert with his wife Carol Marvin to a military base to send the eleventh rocket into Earth orbit to assist the exploration of outer space in Operation Sky Hook, Doctor Russell A. Marvin and Carol see a flying saucer and accidentally records a message on their tape recorder. Once in the base, Dr. Russell is informed by his father-in-law and general that the ten first satellites mysteriously fell back to Earth. When Doctor Russell decodes the message, he encounters the aliens, who ask him to schedule a meeting with the leaders of Earth in Washington in fifty-six days in order to invade Earth without panicking the population. Doctor Russell develops an anti-magnetic weapon that becomes the last hope of the human race against the hostile aliens.” (courtesy IMDB)

REVIEW:
The most famous animated creature in film history was King Kong (1933), built and manipulated by Willis O’Brien. A decade later O’Brien was working on another giant ape movie called Mighty Joe Young (1946) and hired a young assistant named Ray Harryhausen. During the fifties it became clear that Harryhausen had inherited O’Brien’s mantle as the top stop-motion animator in the industry, a position which, in the eyes of many, he continues to hold. Stop-motion animation is done by photographing models one frame at a time to give the illusion that they are in motion when the film is played back (the models are normally constructed around flexible armatures), and then optically combining the results with live action, often using a technique known as the traveling matte. 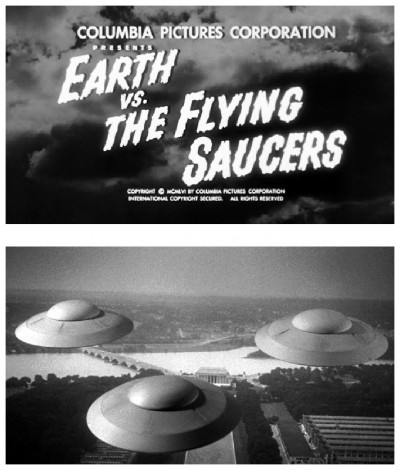 When live action is combined with the animated miniature, tricks can be played with scale, so that a model less than a foot tall can appear to loom up like a colossus. The first film with Harryhausen in full charge of technical effects was The Beast From 20,000 Fathoms (1953). The filmmakers learned that a long-time friend of Harryhausen, author Ray Bradbury, had sold a short story called The Fog Horn to The Saturday Evening Post, about a dinosaur drawn to a lone lighthouse by its foghorn. Because the story for Harryhausen’s film featured a similar scene, the film studio bought the rights to Bradbury’s story to avoid any potential legal problems. Harryhausen soon met and began a fruitful partnership with producer Charles Schneer, who was working with the B-movie unit of Columbia Pictures. 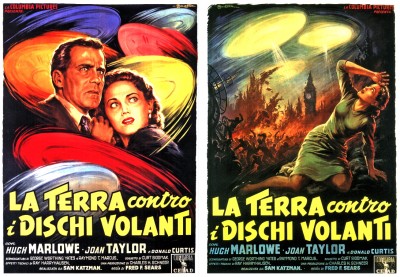 Their first tandem project was It Came From Beneath The Sea (1955), about a giant octopus attacking San Francisco. It too was a big hit, and Harryhausen wanted to start making the fantasy films he would eventually become famous for, but Schneer insisted on riding the science fiction bandwagon for just a few more years. Earth Versus The Flying Saucers (1956), directed by Fred Sears, is far more polished and entertaining than most of the cheap disasters that dominated the decade. Written by Curt Siodmak, George Worthing Yates and Bernard Gordon, the script is directly inspired by a real non-fiction book by Major Donald Keyhoe with the low-key title of Flying Saucers From Outer Space (published 1953). It was also one of the few science fiction movies to live up to its title and accompanying poster artwork. 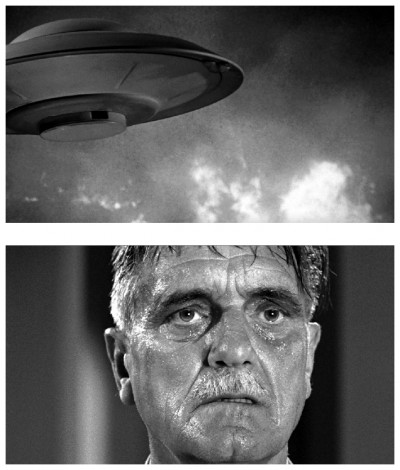 Space scientist Doctor Marvin (Hugh Marlowe) rushes home from his honeymoon with new wife Carol (Joan Taylor) because alien androids have been shooting down his satellites. He soon discovers that the evil extraterrestrials plan to take over the Earth, so he tries to come up with a weapon that will stop them. Full of spectacular sequences involving huge flying saucers, ray guns and weird aliens, the film climaxes with an exciting battle between Earth’s military and the saucers over the city of Washington DC during which a number of famous landmarks are destroyed by the saucers. So impressive is the destruction that, for a time, we find ourselves rooting for the aliens. 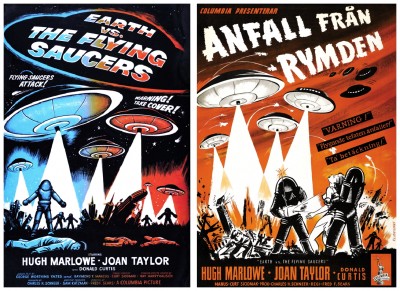 Admittedly, it is a silly film, but a great deal of fun to watch, thanks mainly to Harryhausen’s superbly animated saucers, yet in his autobiography he makes it quite clear that this was his least favourite film: “A prime fascination to me was the challenge of seeing just how interesting one could make an inanimate object such as a rounded metal spaceship. Although the variations were limited for stop-motion, they did provide the potential for doing something a little different than the other ‘saucer’ pictures of the time.” The film can also be seen as a counter-argument to The Day The Earth Stood Still (1951), in which Hugh Marlowe‘s character was wrong not to trust the alien who landed in Washington. 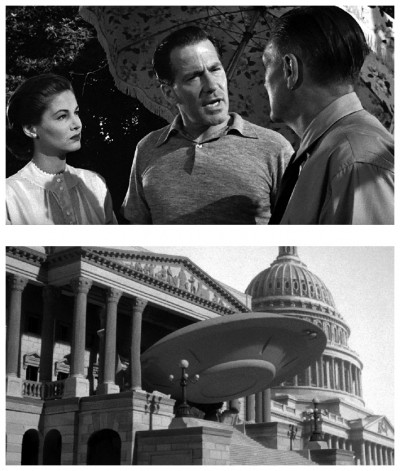 The credible cast also includes Donald Curtis, Morris Ankrum and John Zaremba, but right now I’d like to focus on the voice of the aliens, the talented Paul Frees who, from the fifties to the seventies, was kept busy dubbing dialogue for other actors: He re-voiced Humphrey Bogart (who was suffering from throat cancer) in his final film The Harder They Fall (1956); replaced Tony Curtis‘s ‘Josephine’ dialogue in Some Like It Hot (1959); and re-recorded Toshiro Mifune‘s voice for The Battle Of Midway (1976). Unlike many voice actors who worked mainly for only one studio, Frees worked extensively with some of the greatest animation companies of the last century, including Walt Disney, Walter Lantz, UPA, Hanna-Barbera, Filmation, Metro-Goldwyn-Mayer, DePatie Freleng, Jay Ward and Rankin-Bass. In fact, Frees was still actively working until his sudden death in 1986 from heart failure. 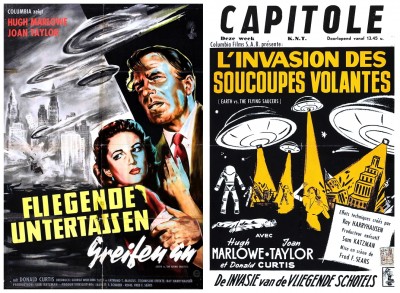 Animator Willis O’Brien, who passed away in 1962, lived long enough to see some of his former pupil’s success, though most of the early films on which Ray Harryhausen worked were comparatively minor. But in the late fifties Harryhausen, along with the producer with whom he nearly always worked, Charles Schneer, had a breakthrough film, The Seventh Voyage Of Sinbad (1958). Very much an exotic fairy-tale largely aimed at children, but with a love interest as well, it turned out to appeal to children of all ages, but that’s another story for another time. Right now I’ll quickly wrap up this article and politely request your company next week when I have the opportunity to tickle your fear-fancier again with another feather plucked from that cinematic ugly duckling known as…Horror News! Toodles! 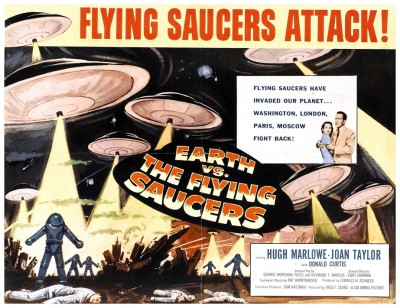