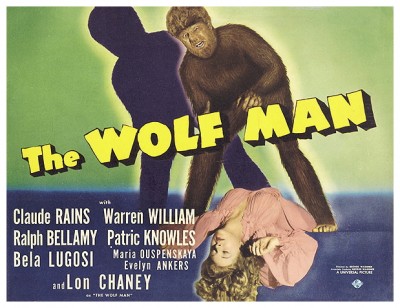 “Upon the death of his brother, Larry Talbot returns from America to his ancestral home in Wales. He visits a gypsy camp with village girl Jenny Williams, who is attacked by Bela, a gypsy who has turned into a werewolf. Larry kills the werewolf but is bitten during the fight. Bela’s mother tells him that this will cause him to become a werewolf at each full moon. Larry confesses his plight to his unbelieving father, Sir John, who then joins the villagers in a hunt for the wolf. Larry, transformed by the full moon, heads for the forest and a fateful meeting with both Sir John and Gwen.” (courtesy IMDB)

Many ‘Old School’ horror fans would have you believe that modern horror films suffer from being too literally horrible (blood and gore) and that things were done much better in the olden days, when horror was conveyed by subtlety and implication, and the cold chill that resulted was because of the viewer’s own imagination was allowed to conjure up sinister shapes that were only hinted at. Although this may be true of the films of Val Lewton and Jacques Tourneur, the weakness in this viewpoint could be clearly seen in such films as The Uninvited (1944), which is all atmosphere and very little substance. Hollywood fantasy during the forties was becoming bland and cosy. Instead of the wonder, exaltation and, sometimes, real menace that characterises the best horror, Hollywood was offering up ersatz substitutes that neither disturbed nor exhilarated.

This was also true of the forties addition to the iconography of the horror film proper. The Americans had already been given Dracula (1931), the Frankenstein (1931) creature and The Mummy (1932) as folk heroes performing in the ever more mechanical charades being put out by Universal. To this list was now added The Wolf Man (1941). Lon Chaney Junior‘s spaniel-eyed portrayal of this unfortunate creature nearly reduced the status of Gothic Monster to Household Pet, and was a key point in Hollywood’s domestication of threatening forces from beyond the sphere of normality into familiar and predictable friends.

In spite of – or perhaps because of – these factors, the film was a great success and did a lot to create the details of the werewolf myth, which owe little to actual folklore and much to the the German screenwriter Curt Siodmak, who co-wrote the screenplay. The most famous, of course, is the gypsy doggerel intoned by actress Maria Ouspenskaya: “Even a man who is pure of heart and says his prayers by night, may become a wolf man when the wolfbane blooms and the Autumn moon is bright.” The Wolf Man was the one major big-budget horror film contributed by Universal during the decade, introducing the mythology of the werewolf in what would become the signature role for Lon Chaney Junior as the cursed Lawrence ‘Larry’ Talbot.

Larry Talbot returns home to his father (Claude Rains) after being away for eighteen years. Things start looking up when he meets a pretty shopgirl (Evelyn Ankers), but the old gypsy fortune teller Mariva (Maria Ouspenskaya) spots the sign of the werewolf, a pentagram, on his hand and warns him he’s in danger. He is attacked by her werewolf son (Bela Lugosi) and, though he kills the beast with his recently-purchased cane with a silver wolf’s head, he is bitten. From now on, when the Autumn moon is full, it doesn’t matter if he’s ‘pure in heart and says his prayers by night’ because he’ll turn into a werewolf and stalk potential victims. Although tortured by what is happening to him, there is nothing he can do to prevent it. In the exciting climax set in the misty woods, the werewolf chases Ankers while Rains, carrying the cane, tries to prevent her murder.

The hollowness of the werewolf story is its fatalistic view that a good man, through no fault of his own, can become a killing beast. There is not much dramatic pith to be found in this cosmic injustice. The beast-in-man idea was done far more interesting in Cat People (1942) in which the beast stands for something already implicit in the person. Critic R.H.W. Dillard thought differently – in his book Horror Films (published 1976) he insisted that The Wolf Man was a retelling of the story of the Fall, but his main piece of evidence – Talbot stole apples as a child – is flimsy at best. Besides, intellectual subtexts do not work if the surface text is stilted, and is almost crippled by Jack Pierce‘s rather mediocre makeup design, which makes Chaney look like a Russian peasant with a woolly cap and bad teeth.

Speaking of which, I have never been able to figure out why Larry retains his humanoid form and walks on two furry feet, while Bela was a full-fledged wolf. Despite this little incongruity, Pierce’s werewolf design would become definitive for many years to come. To achieve the transformation, the actor was positioned on the floor or armchair, his clothes carefully pinned down to prevent movement while the four-hour makeup was applied in stages, a piece at a time. Pierce carefully applied the yak hair to Chaney’s face and several frames of film exposed, then more hair applied and several more frames exposed, a variation of the stop-motion method of animation. After filming, the processed negative was put in the optical printer and each separate shot was overlapped, creating a series of smooth dissolves. It was a technique Pierce was to use again and again for the series of Universal monster rallies produced throughout the forties.

In Frankenstein Meets The Wolfman (1943), Talbot has an encounter with Frankenstein’s monster (Bela Lugosi). Although formulaic, the climax of the movie with the two monsters slugging it out still remains memorable. Later Talbot got together with Dracula (John Carradine), Frankenstein (Boris Karloff) and his monster (Glenn Strange) in The House Of Frankenstein (1944). Karloff made something of a comeback to Universal after working for Columbia in low-budget B-grade films for several years. This team-up proved successful enough to warrant a re-match in The House Of Dracula (1945). Again, Chaney, Strange and Carradine got together, although this time Dracula and The Wolf Man were trying to find a cure for their respective conditions.

By the late forties, comedians Bud Abbott and Lou Costello were in top form, and Universal saw them as the perfect vehicle to milk more profit from their creaky old monsters with Abbott And Costello Meet Frankenstein (1948). Lon Chaney Junior was back as Wolf Man Larry Talbot, out to prevent the Frankenstein monster (Glenn Strange) from being fully revived by Count Dracula (Bela Lugosi), with the reluctant assistance of two hapless baggage clerks (Bud and Lou). For only the second (and final) time in his career Lugosi played Dracula on screen, in a performance that was amazingly layered – both menacing and humorous. While the comedy is deft and precisely timed, the studio made sure not to mock the monsters themselves. Already seen as remnants of a bygone era, Universal still treated them with the respect they deserved. For one last time, the classic monsters got to bask in the applause of appreciative audiences.

The Wolf Man (1941) is now available on Blu ray per Universal Studios on the  “Universal Classic Monsters: The Essential Collection”

This classic tale has since visited the big screen on so many occasions and incarnations, but few compare to this groundbreaking film with its simplistic man-to-wolf transformation, dense atmosphere and literate script. The all too brief inclusion of Bela Lugosi only adds to the reputation of this granddaddy of all werewolf films. The DVD I recently viewed featured interviews with original screenwriter Curt Siodmak, An American Werewolf In London (1981) director John Landis and makeup maestro Rick Baker. Avoid the full moon, perhaps, but don’t avoid the special features! It’s vitally important that you join me for next week’s edition of Horror News, because an old gypsy woman told me that if you don’t read all my articles from now on, the entire world will be destroyed. Normally I’m highly skeptical of such claims, but she was just so certain, I feel we’d best not take the risk. So enjoy your week, and remember, the survival of the entire world depends on you. Toodles!