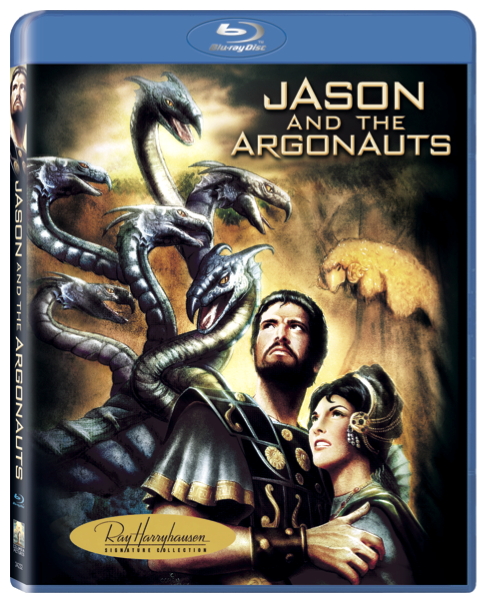 “Jason has been prophesied to take the throne of Thessaly. When he saves Pelias from drowning, but does not recognise him as the man who had earlier killed his father, Pelias tells Jason to travel to Colchis to find the Golden Fleece. Jason follows his advice and assembles a sailing crew of the finest men in Greece, including Hercules. They are under the protection of Hera, queen of the gods. Their voyage is replete with battles against harpies, a giant bronze Talos, a hydra, and an animated skeleton army, all brought to life by the special effects wizardry of Ray Harryhausen.” (courtesy IMDB)

On the night Tom Hanks handed an honorary Oscar to special effects artist Ray Harryhausen, he said: “For some people, it’s Citizen Kane (1941) or Casablanca (1942) but, for me, I say Jason And The Argonauts (1963) is the greatest movie ever made.” This kind of unbridled enthusiasm pretty much says it all. During the late fifties Harryhausen worked steadily on a variety of fantasy projects with producer Charles Schneer, including The 7th Voyage Of Sinbad (1958), The Three Worlds Of Gulliver (1959) and Mysterious Island (1961). At the peak of his creative powers in 1962, stop-motion effects master Harryhausen decided to tackle one of his favourite subjects, Greek mythology. With the same self-assurance and panache that made his last three films box-office sensations and critical hits, he embarked on his most ambitious movie to date, one involving three times the effects work his previous offerings required. It is probably Harryhausen’s best film. 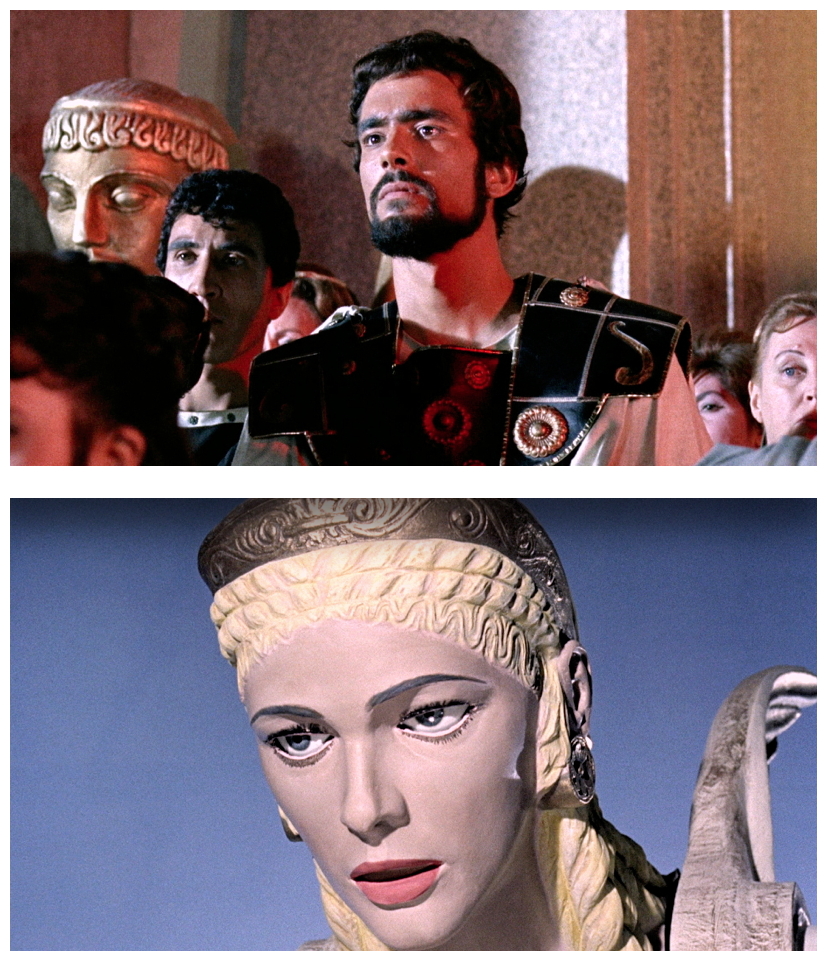 Unfortunately, Jason And The Argonauts did not do as well at the box-office as its predecessors, so the sequel that seems to be promised at the end was never made. The story – which had already been used as the basis of the Italian film Hercules (1958) – involves Jason collecting a crew of heroes together and setting sail to steal the Golden Fleece from Colchis, to use it as a rallying point for the people in his efforts to dispose of a tyrannical king. As one might expect from a tale built around such an epic journey, there is an episodic structure to Jason And The Argonauts, with expertly-crafted special effects sequences (bronze giant Talos, vindictive harpies, etc.) ultimately leading to that ‘Tree At The End Of The World’ and the greatest prize of all, the Golden Fleece. Only a seven-headed hydra and an army of living skeletons (former victims of the hydra) stand between our Argonaut heroes and victory. 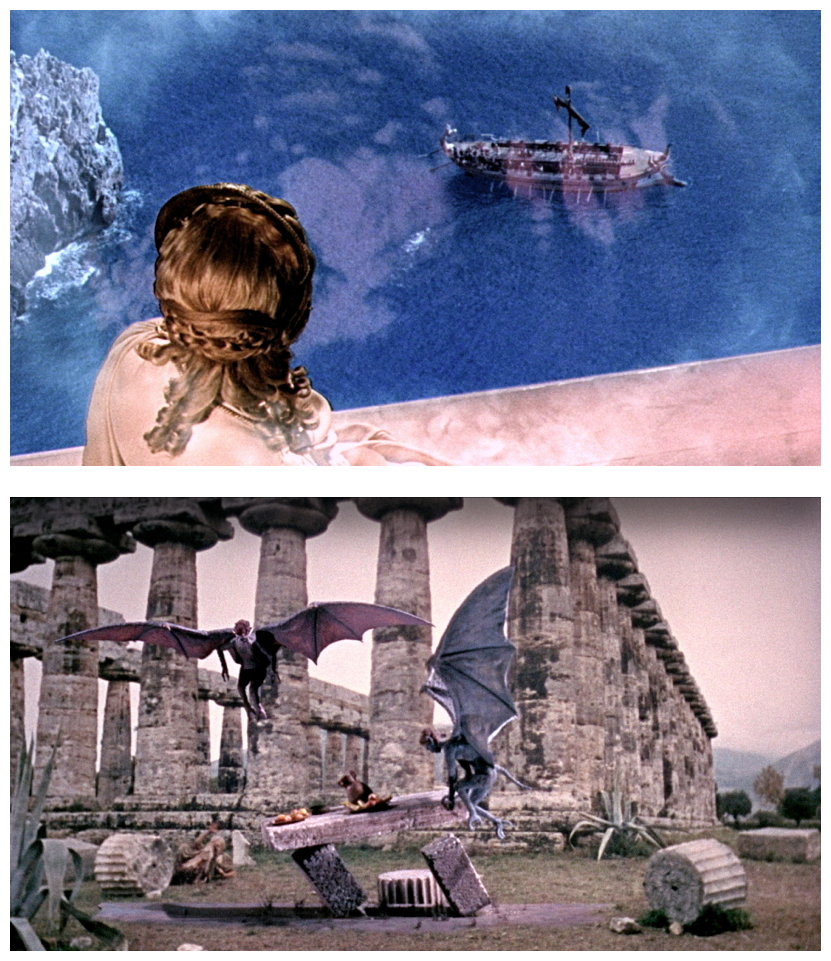 This is the film in which Harryhausen comes closest in capturing the elusive magic that he has so often missed, both before and since. There are moments, like the vast creaking brass statue of Talos coming to life, or the screeching harpies persecuting the blind seer (Patrick Troughton), when the film evokes a primal innocent world in which the natural and the supernatural co-exist, where behind the next hill horrors, miracles or even gods might lurk. Other effects sequences are a bit more knowing and modern, though well done: The fight with the seven-headed hydra, the rising of Poseidon from the waves to hold apart the clashing cliffs through which the ship must pass, and the ultimate fight with the skeletons grown from the hydra’s teeth (it took Harryhausen four months to produce the skeleton scene, a massive amount of time for a scene which lasts, at the most, three minutes). 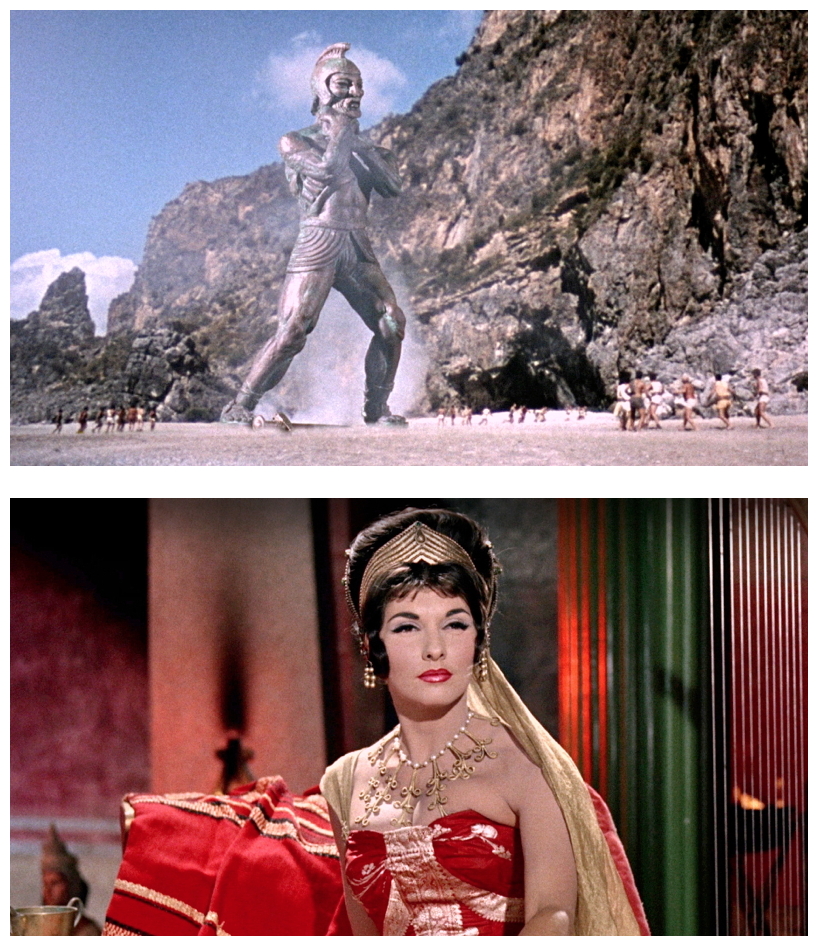 Children love the film and, for all one’s intellectual talk about the vulgarising of mythology and the crudity of the screenplay, there is no denying that Harryhausen contrived to bring a lot of sparkle, excitement and fun back into the world of fantastic cinema, which was beginning to lose sight of these qualities. Stop-motion pleasures aside, Jason And The Argonauts is something of an oddity in that the film’s lead actors, Todd Armstrong and Nancy Kovak (as Jason and Medea) happen to be the least interesting performers in an otherwise extraordinary ensemble. One reason for this is that both actors were dubbed: Jason by British actor Tim Turner (already famous for voicing The Invisible Man in the original UK television series); and Medea was voiced by radio actress Eva Haddon (although Kovak is second-billed in the credits, she doesn’t appear until 66 minutes into the 99 minute film). 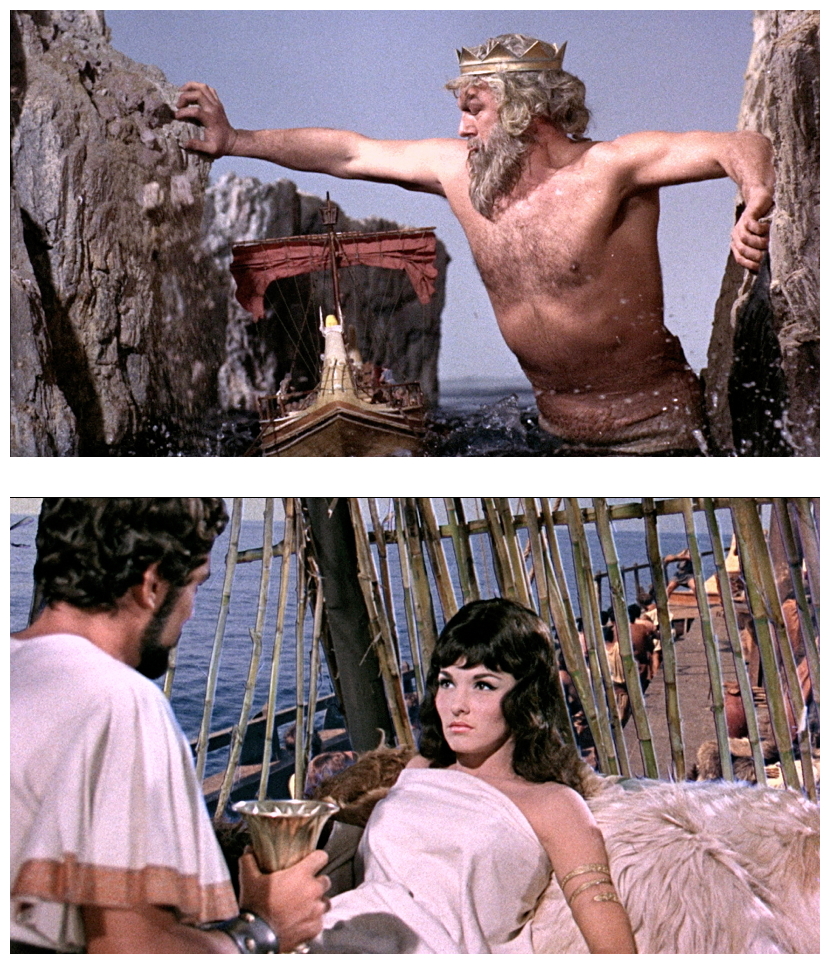 Supporting player Gary Raymond would have made a much better Jason, while Olympians Hera (Honor Blackman) is domesticated but winsome, and Zeus (Nial MacGinnis) is endearing, pragmatic and resonates strongly. A quick comparison with Laurence Olivier‘s artificial and bombastic approach to the role of Zeus in Clash Of The Titans (1981) underscores the qualitative difference between these two conceptually similar (but ultimately very different) movies. Douglas Wilmer underplays nicely as a dignified usurper, Jack Gwillim earns every penny of his salary as the semi-hysterical King Pelias (“Kill! Kill! Kill them all!”) and very British Nigel Green makes a meal out of his performance as Hercules, the most enjoyable since Steve Reeves put on a toga six years earlier. Don Chaffey‘s direction is professional, and the animation is Harryhausen at his most meticulous. Indeed, even the screenplay has its moments, especially the amusingly acid dialogue of Zeus as he watches the earthlings blundering around from his perch in Olympus. 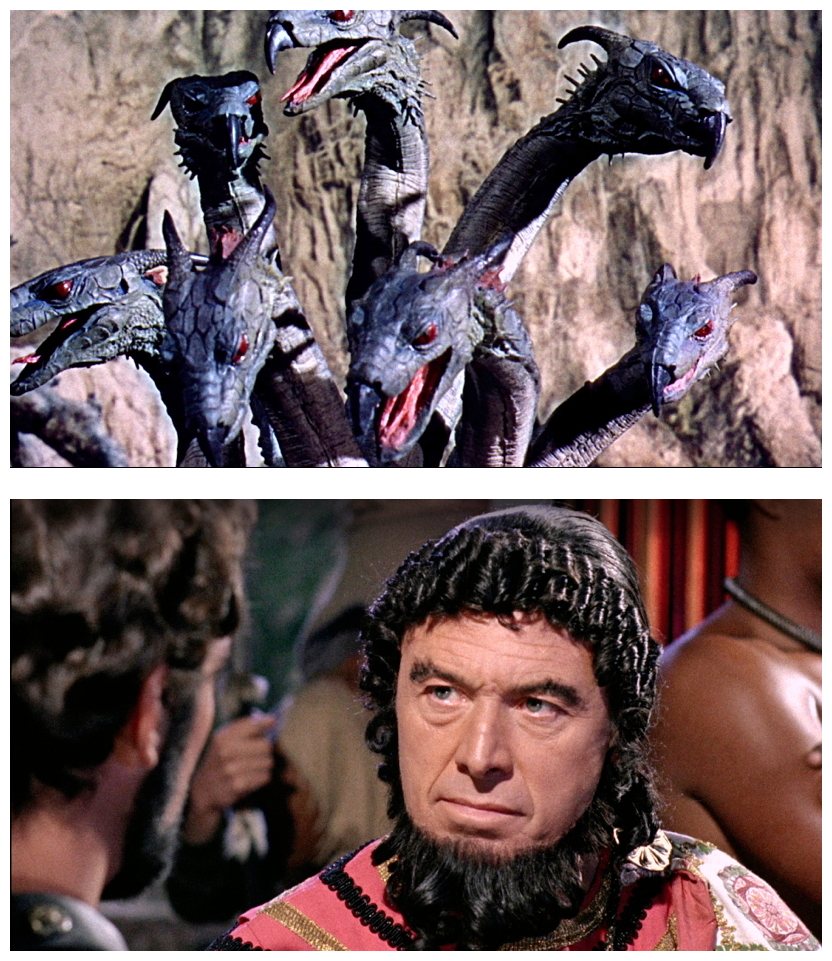 Adding to these colourful proceedings is Bernard Herrmann‘s relentless score, and sharp-eared music historians will probably recognise his ‘Harpy Attack’ cue as a direct lift from Five Fingers (1952). Other recycled Herrmann cues that can be heard include The Day The Earth Stood Still (1951), Beneath The 12-Mile Reef (1953), The Kentuckian (1955), Vertigo (1958) and North By Northwest (1959). Energetic and eager to please, Jason And The Argonauts didn’t match the financial success of Harryhausen’s earlier films, possibly because cheaper fantasy films had poisoned this particular well. But, as Tom Hanks‘ comments suggest, its popularity has only increased over the years. Arguably Harryhausen’s most impressive moment on the cinematic stage, Jason And The Argonauts continues to dazzle and delight. It’s on this upbeat note I’ll ask you to please join me next week when I have the opportunity to throw you another bone of contention and harrow you to the marrow with another blood-curdling excursion through the Public Domain for…Horror News. Toodles! 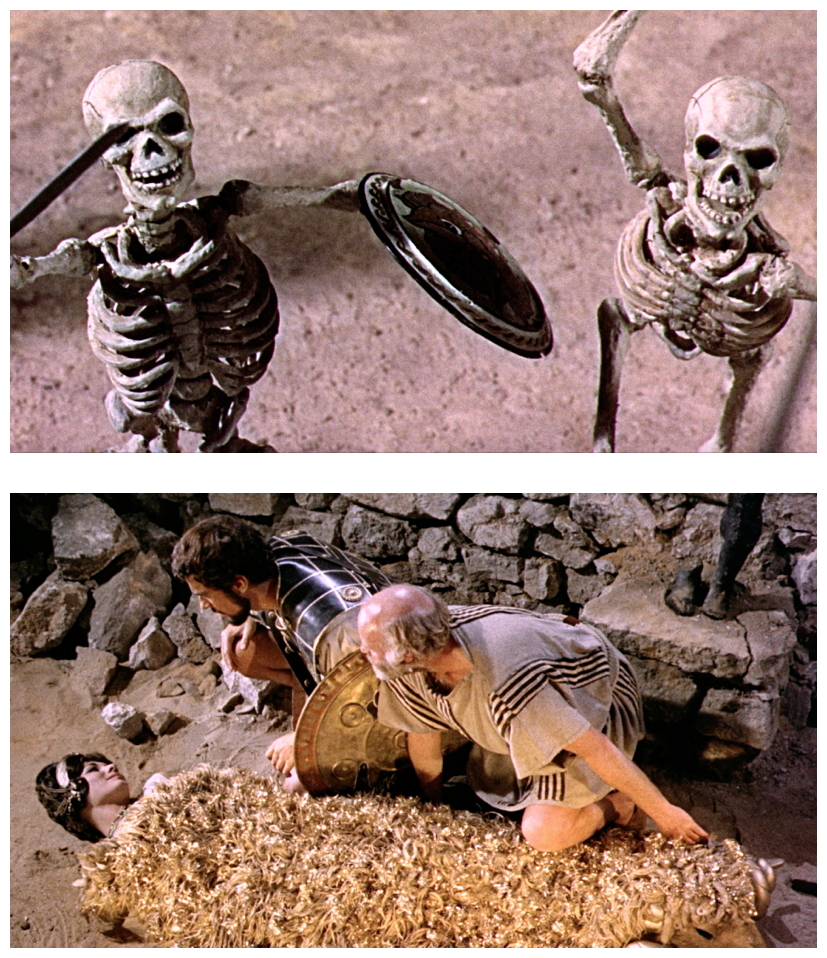