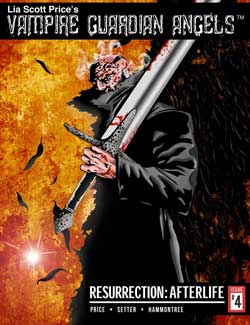 Here is a comic review of Lia Scott Price’s latest, highly anticipated comic book issue yet of her Vampire Guardian Angels series. One that is the most talked about out there online where the creator has gathered up a strong fan base out in the United Kingdom. The issue is drawn by the same talented artists who know how to keep the blood flowing in these pages. We are reintroduced to certain characters that some fans were not expecting to see. The pacing of the issue is well done and keeps the reader wanting to find out more about what is going on in this dark world where evil is all around and it has taken the form of things that we are supposed to turn to for guidance. Lia is not afraid to push the envelope in this series and is not afraid of showing how brutal and vicious her Vampire Guardian Angels can be.

No one is safe from this evil, as the comic is written and translated into horrific images where they stick inside our mind. One of the techniques that makes this issue particularly enjoyable is the way everything is in shadow. There is not a whole lot of description within certain scenes, mostly the killing. We are left to our imagination when someone is getting offed in the next page. The way the colorist puts red into the images is another technique that is creative. The way the blood is toned is another plus that makes this issue so great.

The way certain events unfold are what makes readers curious into seeing what may happen next. You have certain people you want to see make it, but may or may not be surprised. The dialogue is believable, it adds a dimension of its own that makes us care for the characters we’re reading about.

So much is going on in this series that it makes the reader curious about how certain characters will handle certain situations knowing this destiny and fate that’s in store for them. The battle between good versus evil has taken a complete turn for what is promised to be, one hell of an epic proportion. The constant knowledge of knowing that what we pray to is now what we should fear the most, has never been seen before. That is what makes this entire series worthy of buying. The biblical references and how they transform from something that’s supposed to be good, into our worse nightmare makes this all the more scary.

The way Lia is able to turn Guardian Angels like Gabriel into cold blooded killers that prey on humans and take pleasure in killing them is another added layer of how horrific things can be when one of his victims prays to him. The pain and suffering of those who have been affected by these Vampire Guardian Angels makes the characters so compelling and you can’t help but feel for them. The suffering they have endured when those they care about have been taken away is the strongest emotion that can turn them into something we may not expect to see from such a character. The terror is not over by a long shot. There is plenty more action coming our way, as the series leads to an issue that’s promised to bring intensity and brutal horror.

Another interesting thing Lia does in this series is bringing special appearances of death metal bands into her comic. Last issue we saw Death Embraced, now we see the local band Mesmeric guest appearing in this issue.

The artists has no trouble illustrating each band member and getting their likeness down. If you are a fan of the vampire genre and are looking for something fresh and unique, Lia Scott Price’s Vampire Guardian Angels is the horror comic for you.