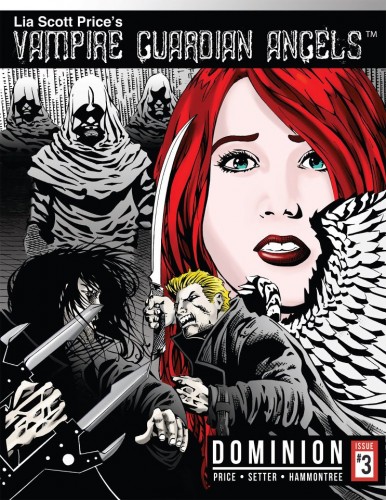 Lia Scott Price’s Vampire Guardian Angels comes to us again, this time issue number three also known as Dominion is now available. The creativity and originality of this series is what catches the reader’s attention. The way Lia is able to make vampires scary again, is enough to make us interested. In a time where vampires have been known to be cute and cuddly, Lia comes back and gives us a new reason to fear them. They are cold, sadistic and will kill anyone they set their sights on. I’ve been a fan since the beginning and Lia doesn’t not fail to disappoint her audience with this new horror series.

What makes this series even more interesting is that the artist Andrew Setter has a talent of capturing the likeness of actual people and translating their images onto paper, the second issue featured the death metal band Enthraller, this issue features local metal band Death Embraced, even Lia herself, is a main character. This series takes us where no vampire author has taken us before and brings out an interesting premise where vampires are our angels, they are our guardian angels to be exact. The way they kill their victims is just plan out brutal and how they choose their victims is another intriguing, not to mention frightening way.

We see a returning character from the first issue and not to mention a whole lot of blood is spilled within these pages. If you are looking for a frightening vampire and are tired of vampires that sparkle, this series is for you.

Lia doesn’t fail to disappoint us fans of vampires and is not afraid to push the envelope with a light subject matter that may be offensive to those who believe in God and angels, but like I always say, “There’s nothing wrong with chaos.” Even as a vampire guardian angel that is just waiting to rip out your throat the moment you begin to pray. The nightmare is not over, there is more blood to be spilled and I have a feeling that Lia is just getting started with this series. So, the writing is good, it keeps us wanting more and has a way of keeping our interest I’m interested in seeing what other actual person likeness, if you will, is going to be used.
The artist for the series is talented and just knows how to use the right amount of black and is not afraid to use too much red.

So, with that said, I have to give Vampire Guardian Angels Issue 3: Dominion, five bloody, severed hearts. It just keeps getting better and better.