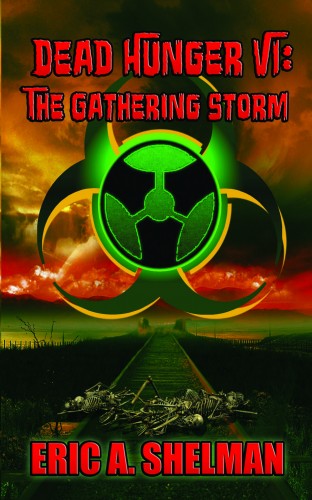 “You never think of that crap do you? Civilization man. We take a lot of things for granted,” Punch.

Life goes on for the small society that has come to know one another as family after the zombie apocalypse. While Flex, Gem, Hemp, Charlie, Trina and Taylor cope living in a world surrounded by rotters a very real diabolical threat has presented itself in the form of the Diphtheria virus among the youth. Will Flex be able to retrieve the crucial antitoxin for his newly born son Flexy? Will Dave and Serena return with Uncle Bug and infant prodigy Isis? Will they overcome the odds and adversity all in the midst of a relentless South Carolina hurricane or will they ultimately find their demise in The Gathering Storm?

The sixth edition of the runaway hit zombie series Dead Hunger finds us in the first person narrative of Flex Sheridan. Aptly enough the chronicles do a complete three sixty where the tales all began. More accurately the plot unfolds in the prose of each Flex and his significant other Gem. Their collective contrast is an infectious voice; pitting both Flex’s rough and tumble, no nonsense approach to Gem’s tender nurturing anecdote with an undeniable undertone of ruthlessness. Combined their recollection appeals to a vast audience making this volume a certified page turner every bit as much as its predecessors. The very prose of the story is symbolism of evolution among the survivors. We’ve endured, sustained, survived, kicked ass and asked questions later right alongside with Flex, Gem, Hemp, Charlie, Dave and the others. We’ve watched them mature, grow and come to cherish them.

Unprecedented character interaction is once again high-lighted. While we’ve come to depend upon the staple individuals, we’re introduced further into the lives of Lola, Rachel, Nelson, Uncle Bug and child prodigy Isis as well as introduced to former U.S. Marine, Punch. The varying personalities keep each situation adventurous and the dialogue flows realistically. The Dead Hunger reading experience in this regard can best be described as being a fly on the wall and witnessing it all unfold.

Flex’s introductory narrative summarizes the series leading up to the Gathering Storm quite nicely. His review is delivered with informative insight rather than succumbing to the temptation of exorbitant exposition. The sixth volume in any series is quite an achievement. Yet the Gathering Storm could as easily be enjoyed as a stand-alone novel for new comers as it could as easily be ravenously consumed by its die-hard fan base.

A descent balance of scientific circumstance and realism is delivered to suspend the plausibility of the plot. We question not the DH survivor’s predicament while empathizing with their plight. Considerable research into such variables as the Diphtheria virus and anti-toxin, weather elements associated with hurricane activity and sociological elements in how human behaviour can run amok in a crisis related society are all indicative and a well-rounded progressive author. Shelman knows his market audience well and can seemingly draft three steps ahead of where our collective subconscious and imagination will take us.

The zombies in their own right become a virtual back drop in this odyssey, threatening to wreak havoc at any time. The plot infrastructure is testament to sound conflict escalation and perpetual suspense. We, as the reader sense their presence but somehow our involuntary guard is let down as we cheer Flex on in his quest to return with the antitoxin and squirm anxiously as the survivors vie to prepare against the fury of the storm.

The creativity and innovation of infant Isis is extraordinary, leaps and bounds ahead of its time in contemporary zombielore. Just when you think everything has been done already in zombie related fiction, Shelman changes the questions just when we thought we had all the answers.

Upon the final act the action that unfolds is dizzying in its complexity and will have readers devouring page after page. Most Shelman readers typically consume his work within two to three sittings and rarely linger between feedings. A true indication of a tale for the ages is the awkward moment when you realize you’re getting sad the story is almost over.

Although I do miss those awkward moment gags, rest assured the Gathering Storm will render you spell bound awaiting more.

A touching afterword is scribed by the author offering insight behind the scenes of Dead Hunger’s conception and what makes the series so infectious from paragraph one.