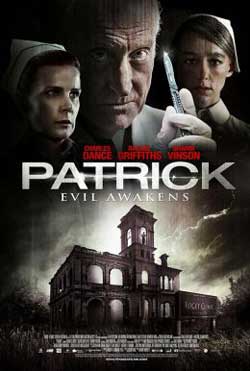 A young nurse takes a new job at a secluded psychiatric ward where she meets Patrick, a comatose young man. He takes a special interest in her despite the fact that he’s in a coma and using the power of telekinesis he begins to eliminate all of the men in her life.

Although I’m not a proponent of remakes I reckon that the science behind remaking films is an odd one. I wonder how it’s decided which films to remake? What’s the criteria? While I can understand the logic in remaking (or reimagining as the powers that be prefer to call it) certain films like Evil Dead or Robocop (one hint – it rhymes with honey), what’s the rationale behind remaking little seen films like Patrick: Evil Awakens? I’m pretty sure that if asked the producers of the film would say it’s to reintroduce the film to a new audience but who’s to say that today’s audiences are even remotely interested in watching a movie in which the title character doesn’t have any lines and doesn’t move a muscle? Director Mark Hartley and screenwriter Justin King seem to think that the time is ripe to take a shot at bringing Patrick back and I’ll be damned if they didn’t make a pretty decent little thriller. 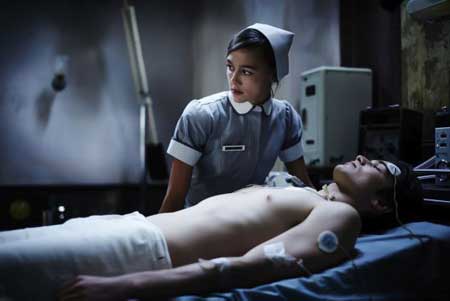 Sharni Vinson plays nurse Kathy Jaquard, who is beginning a new job at a isolated psychiatric clinic. Her immediate superiors are Matron Cassidy (Rachel Griffiths) & Dr. Roget (Charles Dance) who are surreptitiously experimenting on their comatose patients. Dr. Roget is secretly being funded by a large parent organization and he’s using that money to discover a way to reanimate his comatose clientele. He’s under a lot of pressure to come up with a cure soon and is given only 2 more months before his funding is cut off. His favorite patient is a young man named Patrick (Jackson Gallagher) and the bulk of his experiments take place using Patrick as their subject. But after awhile Kathy discovers that Patrick might not be as comatose as he seems to be. As a matter of fact Patrick might just be far more aware of what’s going on than anyone could ever realize. And as Kathy is about to discover, he’s especially aware of her presence – and he’s extremely possessive. What no one around him knows is that Patrick has mastered the power of telekinesis! And once he takes a shine to Nurse Kathy he uses that power to systematically eliminate all the men in her life until he’s the last one standing (or lying down if you will…). 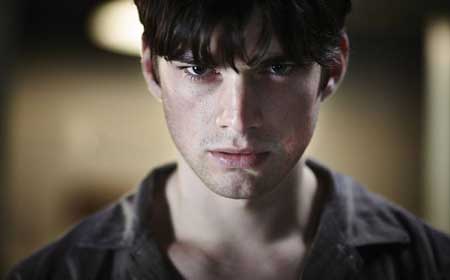 I can’t imagine it being too easy to craft a film around a main character who is incapable of movement or speech so much of the focus of the film is on the character of Kathy and Sharni Vinson gives a very earnest performance in the role. She has a fresh faced quality to her that’s very appealing and despite the inherent silliness of the plot her performance is firmly grounded & believable. I don’t believe Rachel Griffiths has ever given a bad performance and I’ve always thought of her as one of the most talented actresses working today and she doesn’t disappoint here either although her character doesn’t do much more than scowl & mutter until the end of the film. There isn’t a lot more I can say about Charles Dance other than he’s a fine actor and he lends every villainous character he plays an absolutely essential aura of evil. As Dr. Roget he adds a bit of haughtiness to his character’s persona that fits perfectly. No one has a way with a put down like Mr. Dance does and he does more with just his facial expressions than most actors could do with every lesson/trick they ever learned in acting school. It’s hard to lend any sort of critique to Gallagher’s performance as Patrick since all he does is lie there with his eyes wide open for the duration of the film, suffice it to say he does that very well indeed. 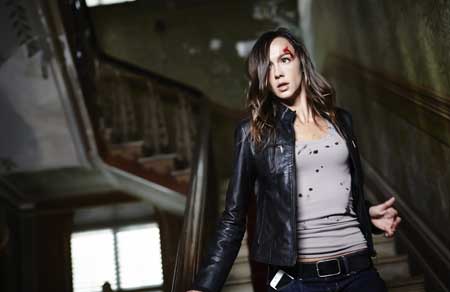 The film is especially lurid & surprisingly bloodthirsty with scenes of chopped off limbs, skin burnt till it literally melts, syringes plunged into eyeballs, etc, etc. As someone who actually saw the original film when it was released back in 78′ I can attest to the fact that this new version is a lot more violent and far more interesting. The original has its charms but I remember it to be an especially slow film with something to jolt the audience from its ever encroaching stupor every so often. The remake takes pains to pay homage to its source material as well although most, if not all of the little Easter eggs are going to be lost on an audience that knows nothing about the original film. For example, In the original film Kathy Pacquard was played by Susan Penhaligon and in the remake Kathy’s ex boyfriend’s last name is Penhaligon as well. 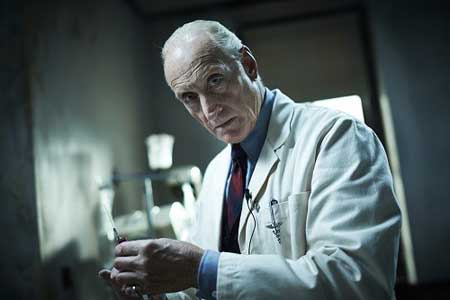 The production scored a coup when they got Pino Donaggio to pen the score for the film but it’s one of his lesser compositions in my opinion. It’s far too bombastic when it should be quiet, especially in a film that takes place in a really beat up old mansion that’s filled with dirty walls & dark rooms (really…who would wanna put a family member in a place that looks like this one does)? The film is replete with jump scares and since the music is so obtrusive from the start none of the scares really work in conjunction with it. According to the end credits, some cues from the original score (by Brian May) are tossed into the mix as well although I couldn’t tell where or when.

This film is a change of pace for director Hartley as he’s better known for a pair of documentaries he directed, “Not Quite Hollywood” (2008) which was a look back at the whole Ozploitation craze of the 70/80’s and “Machete Maidens Unleashed” (2010) which recounted the history of Filipino exploitation films of the late 60 thru the mid 70’s and although I prefer his documentaries (he’s currently working on one telling the history of Cannon films), I think there’s a lot to like about “Patrick: Evil Awakens” (shortened to just “Patrick” on the screener I received). It’s not a fast paced film but it doesn’t drag either. Some good performances and unexpectedly gory bits make for an entertaining 90 minutes. Even if you aren’t familiar with the original I think you’ll get a decent enough buzz while you watch it.

“Patrick: Evil Awakens” will be released to theaters by Phase 4 Films on March, 14th.