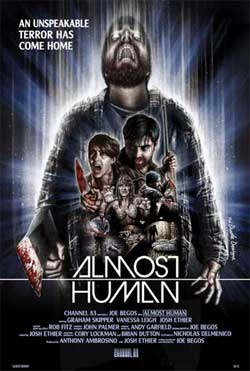 Mark Fisher disappeared from his home in a brilliant flash of blue light almost two years ago. His friend Seth Hampton was the last to see him alive. Now a string of grisly, violent murders leads Seth to believe that Mark is back, and something evil is inside of him.

The 1980s brought us more than lousy hairstyles and even lousier attire.  The independent horror industry boomed with the emergence of the slasher subgenre, or as I like to call it, “giallo for dummies.”   Rental shelves were overflowing with the dreams of fledgling film makers hoping to replicate the magic of “Halloween” and/or “Texas Chainsaw Massacre.”  For those who looked no further than cool box art, it would seem these wannabes were the only available titles under the sun. 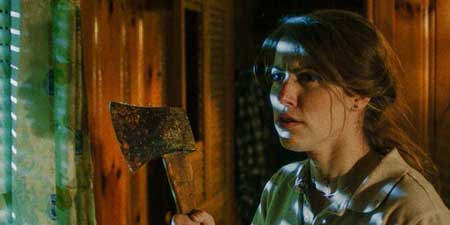 They were not.  Due to the success of “Alien” and the unapologetic carnage of “The Thing,” the decade brought us countless science fiction/horror hybrids, many of which carried more creativity in their opening credits than any body count flick possessed within an entire runtime.  A great deal of these entries flew under the radar upon initial release, only to be discovered years later.  A film such as “The Deadly Spawn” didn’t stand a chance at widespread acclaim in 1983, but has since been elevated to cult status. 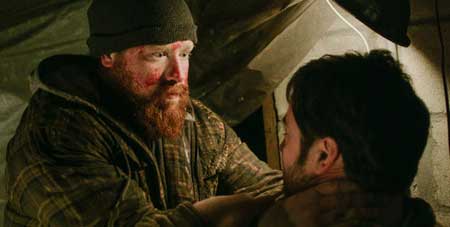 With the likes of Christopher R. Mihm recreating the 50’s drive-in movie and Richard Griffin covering just about every other retro vibe, it was only a matter of time before someone stepped up and paid homage to the gooey stylings of 80’s sci-fi thrillers.  That someone is writer/director Joe Begos, and his debut “Almost Human” is the perfect fix for those of you who jones for the days of no-budget gore romps such as “Xtro,” an obvious influence here.  Long story short, this is one fun movie.

Of course, absolution for a lack of thematic originality must be granted in order to properly enjoy a faithful throwback film (I know many who do not and I pity them), and “Human” is no exception.  Along with the aforementioned “Xtro,” “Invasion of the Body Snatchers” and forgotten gem “The Hidden” are both owed a great debt of gratitude as well.  In fact, there is very little that occurs during the brisk 80 minutes that won’t inspire memories of past works, but it matters naught when an endeavor is presented with this much enthusiasm and affection. 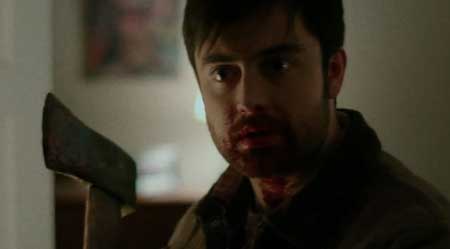 Taking place in the sleepy Maine community of Patton in 1987, a sequence of alien abduction starts the ball rolling effectively.  Seth Hampton (a terrific Graham Skipper) and Jen Craven (Vanessa Leigh of “Self Storage” and “You Can’t Kill Stephen King”) witness best friend and fiancé Mark Fisher (Josh Ethier, who also served as editor) disappear in a beam of light from above.  Since neither has any recollection of the incident, the police accuse Seth of abduction and possible murder.  When no evidence or body is found the case is dropped, leaving Seth a town pariah plagued by nightmares. 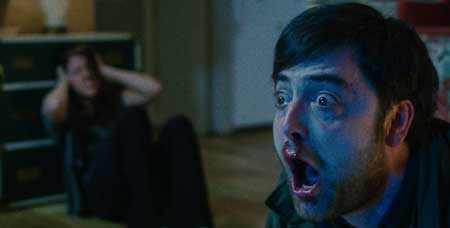 Two years later, Jen has moved on and is engaged to Clyde, portrayed by newcomer Anthony Amaral III.  Seth works a menial job in a hardware store and keeps as low a profile as possible.  News stories begin to surface of strange lights in the sky and power outages, much like those reported that fateful night.  Seth suspects the worst, and seeks out Jen to warn her that he believes Mark is returning from wherever he’d vanished to.  She is far from convinced, and Seth exits their reunion alone in his fears.

Once Mark is found in a forest miles away by a pair of hunters, naked and covered in a thick slime, “Human” settles into its infectious groove. He quickly dispatches of the two after uttering only “Jen,” and makes his way back to Patton with sinister plans for the futures of both his former flame and the entire human race.  The proceedings follow a familiar slasher formula along his homeward journey, but Begos keeps them moving with an expert sense of pace and highly inventive kills.  Axes, chainsaws and a shotgun all come into play, and the thrifty production spares no expense on the viscera.

Making his presence known to Seth and Jen promptly upon arrival (subtlety is not a strong suit in his new form), Mark ties her up in a shed with the few victims’ bodies he’s left intact, now cocooned.  It won’t take a genius to figure out his intentions for us puny Earthlings, and I am loath to go into them in depth for fear of turning away potential viewers.  As previously stated, you won’t find any plot twists or surprises here, just brilliant execution of well-tread ground.

The performances of the three leads are an enormous factor in the enjoyment of “Human” (affording Mark a small shred of the humanity he’d left behind is a stroke of genius), but it’s Skipper who must carry the brunt of the emotional heft and shines as the haunted Seth.  Fresh from his stage stint as Herbert West in “Re-Animator: The Musical,” he calls to mind the soft-spoken intensity of Kyle MacLachlan in his days as David Lynch’s go-to guy.  Given that Agent Dale Cooper is one of my favorite fictional characters of all time, I do not throw such words around loosely.

What impresses most is the painstaking attention to detail apparent in every frame.  Begos and company created a piece that is not only set in 1987, but looks and feels as if it was made that same year.  From the outstanding synthesized score by veteran Andy Garfield (the “Hatchet” series) to his own cinematography, Begos has sculpted a veritable time machine of a film with “Human.”  He’s a talented dude, and I for one cannot wait to see what he has in store for us next.

T.S. Eliot is arguably accredited with the quote, “Good writers borrow, great writers steal.”  Though it reads like a justification of plagiarism, it refers to making what inspires your own and not mere mimicry.  That is precisely what “Almost Human” accomplishes.  This is no derivative rehash, friends.  Hell, even if it is, I guarantee you’ll hardly notice.  Find it.  Watch it.  Thank me later. 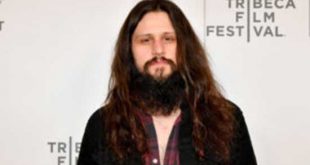