SCREAM FACTORY Announces Two Titles In Their Summer Of Fear

You already know how much I love SCREAM FACTORY and that love affair will continue as they roll out their SUMMER OF FEAR. A couple “must own” titles just got added to the list so read on and see where your money will be going this summer.

The following announcement was posted on their Facebook page.

**NEW TITLE ANNOUNCEMENTS! THE LEGEND OF HELL HOUSE & MOTEL HELL ON BLU-RAY IN THE U.S. FOR THE FIRST TIME!!**

Our “Summer of Fear” release slate continues to get scarier with two more films added: 1973’s THE LEGEND OF HELL HOUSE (starring Roddy McDowell) and 1980’s slasher romp MOTEL HELL will both be coming to Blu-ray in August. MOTEL will be getting our “Collector’s Edition” treatment with slipcover and the newly-designed artwork is already in the works.

No other details to report at this time but more will be revealed in May/June as to the specifics. 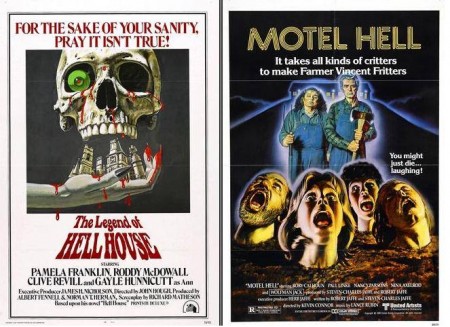