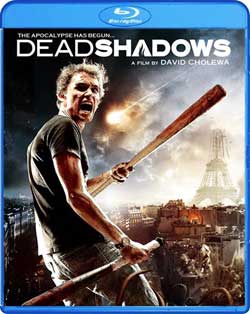 This spring, brace yourself for more high octane sci-fi terror and apocalyptic alien & zombie mayhem! On April 29, 2014, SCREAM FACTORY™ will unleash DEAD SHADOWS on Blu-ray™ and DVD. Boasting a large cult following in France, Japan and U.K and a festival favorite at the 2012 STIGES International Fantastic Film Festival, DEAD SHADOWS is a wildly entertaining thriller that combines heart-racing suspense, sci-fi action and alien terror with plenty of jaw-dropping surprises. This highly anticipated SCREAM FACTORY™ release marks the North American debut of this movie. Packed with insightful bonus content, DEAD SHADOWS Blu-ray™ is priced to own with a suggested retail price of $22.97 and $14.97 for the DVD. A must have for movie collectors and sci-fi action enthusiasts, DEAD SHADOWS is available for pre-order now.

Produced and directed by French Filmmaker David Cholewa, DEAD SHADOW, starring Fabian Wolfrom, Blandine Marmigère, John Fallon and Rurik Sallé, tells the terrifying story about a young man, Chris, whose parents were brutally killed 11 years ago, on the same day that the Halley’s comet could be seen from earth.

Tonight, a new comet is going to appear and everyone in his building are getting ready for a party to celebrate the event. There’s even an apocalypse theory going around.

As the night falls, Chris starts to discover that people are acting strange – and it seems to somehow be connected to the comet. People are becoming disoriented and violent and it doesn’t take long before they start mutating into something from beyond this world.

In a fight for survival, Chris has to try to escape from his building with the help from some other tenants – but will they make it out alive?