Home | The Trailer for BATES MOTEL S2 Show Up

The Trailer for BATES MOTEL S2 Show Up

A nice look at what season two holds in store for fans of BATES MOTEL has shown up. With the March 3rd premiere date fast approaching I would say it’s about time. Let’s not waste any time, here’s the goods:

Here’s the official take on what season two holds:

Picking up from last season, Norman (Freddie Highmore) is fixating on Miss Watson’s death while Norma’s mysterious past starts to haunt the family with the introduction of her brother. Meanwhile, Norman’s brother Dylan, (Max Thieriot), gets more entrenched in the familial drug war that fuels White Pine Bay and finds himself right in the middle of the danger as Bradley (Nicola Peltz), who remains on the hunt to uncover her father’s killer, is driven to precarious extremes. Sheriff Romero (Nestor Carbonell), is caught up on all fronts as everything in town escalates and Emma (Olivia Cooke) complicates her relationship with Norman as the duo explore new love interests, bringing new and old characters along for the ride.

Don’t know about you but I’m as excited for this return as I am for THE WALKING DEAD. 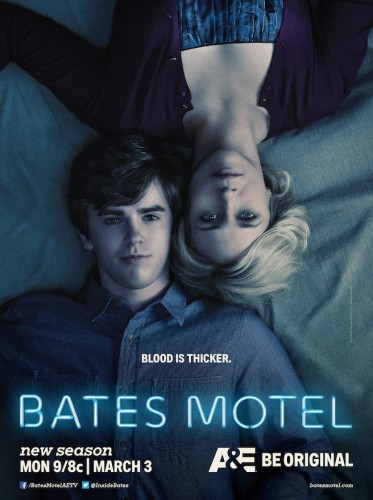