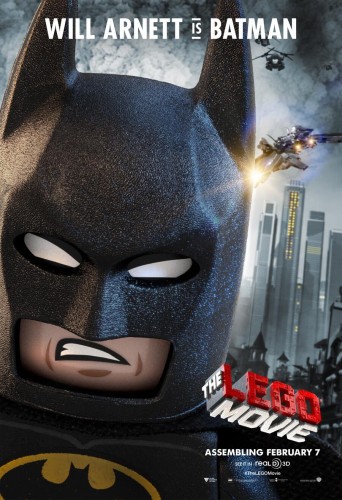 SYNOPSIS:
Emmet Brickowoski is an everyday, ordinary, Lego construction worker. He lives life as President Business wants all the citizens of Lego Land to live. It’s a peaceful life. Everything is awesome. However, President Business – or, rather, Lord Business – has other plans. He is set to rule the entire Lego universe when he unleashes the Crakle on Taco Tuesday. A small band of heroes comprising of Vitruvius, Wyldstyle, Uni-Kitty and Batman mistake Emmet as the Special looking to the confused, would-be Master Builder for a plan to put a stop to Lord Business’ evil plan.

REVIEW:
Pure imagination! The Lego Movie is an instant treasure, destined to win the hearts of kids and adults alike as it transports its audience to a wondrous world of Lego characters and blocks of all shapes and sizes. It effortlessly taps into that unique quality Lego blocks (and similar building toys – Lincoln Logs, anyone) create when they inspire the raw imagination of young minds, regardless of the “builder’s” true age. The film focuses on the most common of Lego characters, one that is not of any remarkable quality, one that easily gets lost in the crowd, he’s the one in the big, seemingly bottomless, bin at the Lego stores in the mall. The film clothes him in a construction worker outfit and sets him next to hundreds similar toy-people. His is lost in a crowd. His name is Emmet and he is perfectly content in his world…until he stumbles into a big adventure and sees his world anew, realizing the full potential of building with no boundaries, no rules. But, it is not an easy journey; he is a block-head that always builds by-the-rules, from the instruction manual, never deviating. Now, suddenly, he has no manual, no rules and no clue what to do. Luckily he has the rogue Master Builder, Wyldstyle and her boyfriend, Batman, to guide him. With anything suddenly possible, nothing looks the same and everything can be anything. And what it all becomes is inspired. 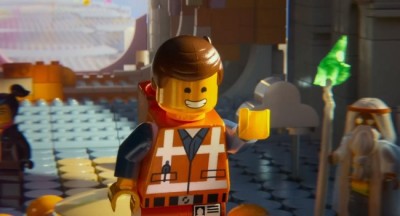 “Everything is Awesome!” This is the title of the only song that plays on Lego Land’s radio station, the catchy jingle of a tune that President Business affords to the public who consume it willingly and hungrily. They go about their days, destroying and building the city scape over and over. Everything is by the rules, following a specific step-by-step set of instructions. All is right. Or is it? No, it is not! Imagination cannot be contained and the story of The Lego Movie champions that simple idea. It does so with a wicked but joyful sense of humor, toying with some of its popular licensed products and familiar designs and characters. Superman, The Green Lantern, Wonder Woman and Batman are all here as well as Gandalf and Dumbledore. The list goes on and on: pirates, ghosts, spacemen, basketball players, even Abraham Lincoln and William Shakespeare. It is fantastic and sure to put a big, silly, happy smile on the crankiest of faces.

Sure, sure, it may be just a big, 90 minute commercial, but it has its heart in the right place. The story has a great theme of realizing one’s true potential, to be unique, to believe in one’s self. It even plays on its own themes by referencing and cleverly parodying the famous kitty poster “Believe.” But, do not be fooled, the screen writers and directors, Phil Lord and Christopher Miller (Cloudy with a Chance of Meatballs, 21 Jump Street), have a trick up their sleeves. It is when they reveal this ace that the film transcends becoming far more than an entertaining block version of Toy Story. Saying more would be unfair, giving it away unjust. But the last third of The Lego Movie is something truly special, a unique twist on the concept that makes everything important and worthwhile. And fun. Fun. Fun. Fun. 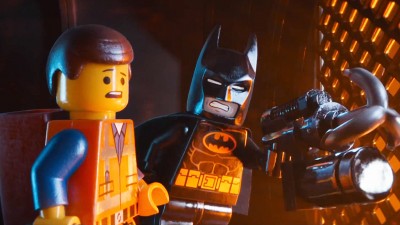 It would be criminal not to mention some of the voice talent that is behind the large cast of characters in The Lego Movie. Chris Pratt brings a warm, friendly quality to Emmet lost in innocence but with a sly sense of humor and observation providing laugh after laugh. Elizabeth Banks has a blast as Wyldstyle, the female block with an identity crisis and a rogue attitude. Of course she is torn between falling for Emmet and being lovestruck for her boyfriend, Batman. Yes. Batman. Will Arnett steals the entire film as Batman – well until he is upstage late in the film, but…hush…can not tell you that. Arnett delivers every silly Lego line with deadpan Christian-Bale-Christopher-Nolan seriousness. And nothing has been this funny. It is so refreshing to see (hear) Morgan Freeman have fun again, playing the wise old wizard Vitruvius. The film is full of surprise cameos that would be a shame to reveal here. 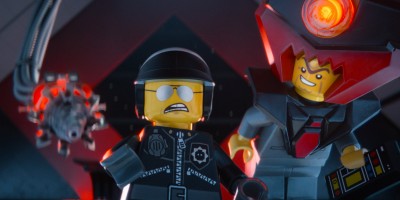 Now, any film with heroes would not be a success without a great villain. Right? The Lego Movie has the ultimate bad guy, the pinnacle of comedy villainy: Will Ferrell voices President Business, correction, Lord Business. He is bloody brilliant and he breathes life into the film in so many ways. His delivery is animated and energetic, infectious. But as good as Will Ferrell is, in comes Liam Neeson stepping out of the comedy giant’s shadow killing it as Bad Cop/Good Cop, one of those Lego heads that has two faces, one one each side. Neeson gets a rare opportunity (of late) to leave the serious hero figure behind to have fun playing the bad guy. It is amazing to hear, a great vocal performance. 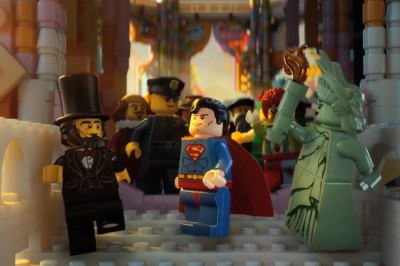 The Lego Movie is a blast, pure entertainment and a great time. Do not miss it. Warner Brothers has come closer than anyone at capturing the magic that Pixar has mastered with films like Toy Story, Cars and Monsters, Inc. This film sits comfortably next to them in quality, story, animation and fun. That’s right, fun – this movie is so much fun as the characters, the master builders, construct whatever they need, regardless of however silly it looks, out of the blocks around them. Even Batman gets into the thick of it, of course, he needs all black blocks – or, sometimes, dark gray. It is that combination of heart and imagination that make this film so special, so warm, so entertaining. Be prepared to leave the theater with the biggest, goofiest of smiles on your face. It is great to be reminded of the boundless creativity of childhood and know that it still lives inside you. Brilliant.