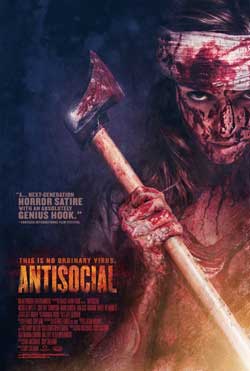 Five university friends gather at a house party to ring in the New Year. Unbeknownst to them, an epidemic has erupted outside, causing outbreaks around the world.

I’ve said it  before.  One would be damning 97% of all horror films in existence if a lack of original content alone was enough to warrant unfavorable judgement.  After all, there are so many other areas in which our beloved genre can royally muck things up.   In an era of reboots, remakes and retreads (my slang term for sequels for the sake of alliteration), a little “borrowing” here and there is no longer a cinematic crime. 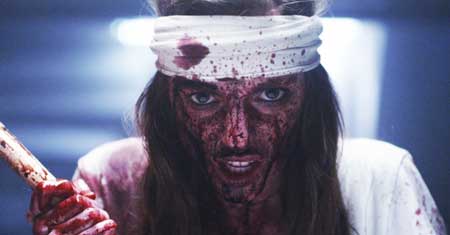 Which is precisely the positive attitude required to appreciate our latest offering at it’s basic level.  Lifting material across the board, director Cody Calahan and co-writer/producer Chad Archibald have combined elements from “28 Days Later,” Stephen King’s “Cell” and even sprinkled in a dash of “Halloween III: Season of the Witch” for good measure in creating their claustrophobic sci-fi thriller “Antisocial.”  At times a bit overreaching in it’s attempts to broach social commentary, Calahan’s first feature-length film is nonetheless a crafty, occasionally involving little ride.

A video blog of two girls that turns ominous and ends in murder accompanies the credits, giving the enterprise a potent jump start.  Talented newcomer Michelle Mylett portrays college-aged Sam, who is promptly dumped via text (stay classy, youth) as the film opens.  To add insult to insult, the ex changes his relationship status on the networking site Social Redroom (think Facebook for Canadians) to “single.”  To lift her spirits, she is invited by Mark (Cody Thompson) to an intimate New Year’s Eve celebration with friends before heading out to the real party later in the evening.  In my day, we referred to these preceding gatherings as “priming,” but I’m certain the kids today have replaced the word with something barely resembling any known language. 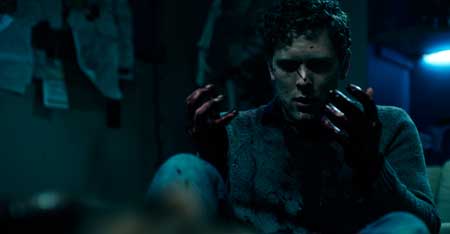 Sam arrives at the dark house to a jump-scare prank perpetrated by the geeky Jed (Adam Christie), a horror trope that I really wish could be put to rest once and for all.   Quick note to film makers: That tired “gotcha” trick hasn’t frightened us since Carpenter utilized it in 1978.  It’s been thirty-five years, people.  Knock it the hell off already.  After everyone had a good laugh at Sam’s and my patience’s expenses, Mark introduces her to the gang.  Along with that rapscallion Jed are horny couple Kaitlin and Steve, played by Ana Alic and Romaine Waite, respectively.  This is accomplished swiftly with a clever montage of Redroom statuses and posted pics from each character.  Nice touch.

Because we just have to hit every cliche along this journey, scenes of wild carousing (Sparklers indoors?  Now I’ve seen everything!) follow.  Once Kaitlin and Steve retire to the boudoir, Jed flips on the television to the first news reports of violence.  The breaking update, detailing the killing of a student by a peer in an act of aggression, is written off as cyber-bulling.  Before one even has time to scoff at this red herring, Kaitlin and Steve are attacked in the bedroom by a blood-spewing . . . well, you know friends.  One of those things.  The infected, severely pissed sort-of-zombies-but-not-really things?  Yeah, one of those. 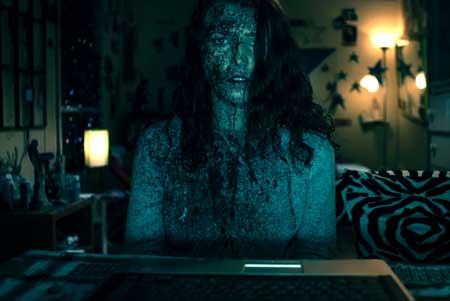 Steve shoves the intruder off the balcony, and a call to the authorities proves fruitless, as all emergency lines are busy.  Things escalate quickly from there (another credit to Calahan’s confident direction), and soon our leads are boarding up the doors and windows to keep the ever-increasing amount of baddies at bay.  With help via the news outlets and a far too informative Internet (more on that in a minute), we learn of the disease’s symptoms, involving bleeding from the ears and nose, as well as hallucinations at the onset.  These initial moments, as members of the core players begin feeling the effects of the sickness, are some of the film’s best and incorporate a slick “body horror” quality into the framework.

Attempting an awkward found footage vibe, “Antisocial” also follows the exploits of Jed’s best friend Brian (Eiton Shalmon) online, as he is trapped back at the dorm under lock down, documenting his ordeal until long after anyone else would have put the damn camera down and focused on running like the wind.  In fact, a whole slew of people taking time out from not dying to record Internet vids is brought in as the situation at the house grows direr, providing more frantic exposition in their confessions than an M. Night Shyamalan end reveal. 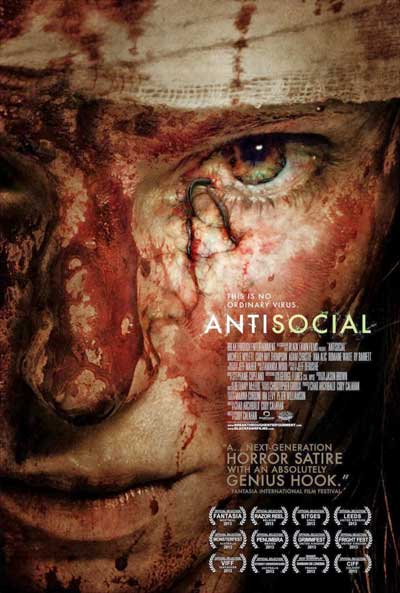 This is precisely where “Antisocial” goes wrong, in its obsessive desire to explain every detail of what’s unfolding.  Or more specifically not unfolding, because the action hits a momentary wall each time these unnecessary bits of blah-blah occur.  The connection between our beloved Web and the virus is interesting enough and affords a few subversive chills, one entailing corpses inexplicably broadcasting a live feed directly to their Redroom accounts.  That aside, the origin is a preposterous and silly conceit, so the less said about it the better.  “Evil Computers Make Humans Bonkers.”  That’s enough to know for any of us.

The performers are a natural and likeable lot, keeping things far from dull even at the movie’s most ludicrous points.  A tearful group decision to turn a friend away who’s displaying symptoms is a disarming, truly emotional moment in their capable hands.  It’s Mylett who emerges as the true rising star, projecting Sam’s wild personal arc with precision and grace.

Speaking of which, I feel I have to openly apologize to my friend Timmy for spoiling the ending for him after my viewing.  It won’t take a genius to figure out beforehand, but that didn’t detract from the sheer coolness factor and my need to talk about it out loud to someone.   Coupled with what the character of Sam has evolved (or devolved) into amidst it all, and “Antisocial” is well-worth a look.  But, just barely. 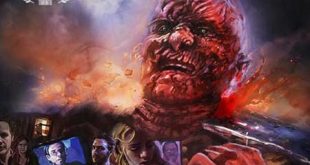