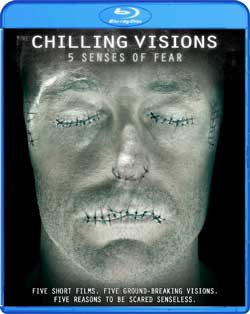 When sitting down to watch a movie called Chilling Visions: 5 Senses in Fear, the mind races at what this could possibly be about, and if you take the title for it’s most literal meaning, then it tells you plain out. This movie is about the five senses, with twists as to how all can be deadly in some way, but is it more than just the same morality tales of old or something new and bold.

In my opinion, I feel that anthology films would be the hardest to write and film, all the different stories that have to keep your attention, all the different locations, and different and numerous actors. Many films in this format have come out, the big boom of these films seemed to start in the early 1970’s and fading out in the early 1980’s, highlighted with the Steven King, George Romero, classic Creepshow.

Most of these films seemed to only boost three half hour installments, Creepshow, tried breaking the mold with five very different and unique shorter stories. Even with two legends behind the film, the five films didn’t all meet with total success. With that in mind, how would a film with less money and five different writers, and director’s fare. 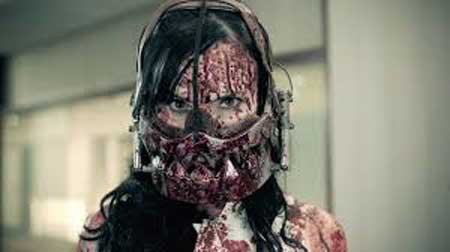 When the movie first starts, we are shown a man tired to a chair, as a person in a hazmat suit is torturing him. It ends with the man in the hazmat suit sewing the bounds man’s eyes, mouth, nose and ears shut. This is how we are introduced to the movie, they move into a close up of the man’s closed off nose and start the movie off with the sense of smell.

We meet a slob of a man named Seth Kyle (Corey Rutledge), who is visited by a strange woman, Miss Margaret (Hilary Greer), who gives him an experimental cologne that will turn his life around. Skeptical Seth takes the cologne and puts some on before he goes to work, suddenly instead of getting fired he gets a promotion, and all the women seem to take notice of him. But the cologne has a nasty side affect, and Seth has to make a choice as to continue using it or go back to being a nothing. 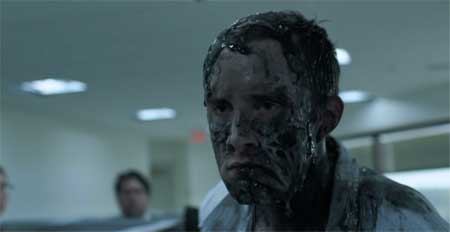 We get to see the bound man again and it does the same close up shot for the beginning of the next segment, sight. This time we meet up with an elderly optometrist, Dr. Tom (Ted Yudain), who has a way of taking a person’s memories out of their eyes and by placing the liquid in to his own, see what they saw. One of his favorite patients comes in for a checkup, and he notices a bruise on her chin, he takes her sight and sees that her new boyfriend is beating on her, so he wants to give him some of his own medicine. After his well thought out plan backfires, it sparks something in the boyfriend, Travis (Lowell Byers), and the doctor finds himself in his own nightmare scenario. 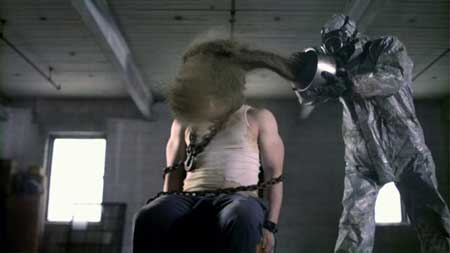 After these first two segments, the best two in my opinion, the last three seem to fall off a little bit. The third sense is touch, which starts with a family getting in to an accident on a deserted autumn road. Their blind son, Henry (Caleb Barwick), is the only one who is healthy enough to go and find help. He feels his way around the woods, where he stumbles upon a seemingly empty house. This is when the connection between the segments takes shape, as Travis, the abusive boyfriend, from the last section makes an appearance as a killer still on the loose. Henry has to try and escape from Travis while finding his way back to his parents.

Next comes taste, and this is probably the worst section, as it has nothing to do with the sense, but it does try and pull all the other segments together doing a nice clean job of it. It starts with a slacker teenager, Aaron Whitworth (Doug Roland), riding in the back of a limo, he doesn’t know where he is going; only that it is for a job interview. Once he gets to the Watershed Company, we see a couple more familiar faces, Miss Margaret and Dr. Tom. He is told to sit down and wait for his interview with Ms. Sharp (Symba Smith), where he starts talking to other employees of this giant, bewildering company. He is called into the conference room where his interview takes place, they go over his troubled past and offer him a job, but Aaron must decide if it’s better to take the job, or suffer the consequences. 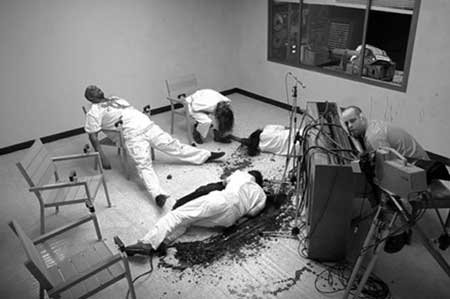 The last sense is the sense of hearing, two men; Andy (Lance Kramer) and Jesse (Joe Varca) are tasked with the job of trying to find a lost song, which if played the whole way through will kill all who listen to it. It was said that someone had done the experiment before and filmed the results, so Andy and Jesse try to find the lost tapes. They go through a few different channels before they finally get all the pieces they need to put the tape back together. After they finish their product, something goes terrible wrong, leaving the two to wonder why they ever started down this path in the first place.

There is only one big problem with this movie, that being that there isn’t any bookends. If you sit down to watch almost any analogy, the movie starts with someone pulling up to the drive-ins or someone being sat down to be told stories. Then in the end, you get to see those same characters, usually learning some kind of lesson along the way. Some even go as far as having little intermissions between the stories, letting us see the progression of the original characters, this movie doesn’t do that.

They start with the man being tortured, and the credits roll right after the last segment ends. This leaves you feeling more like you just watched five shorts instead of the feature film, and with the careful job they did to intertwine all the stories together it leaves an empty feeling. That’s not to say that this movie isn’t watchable, because I would recommend it, most of the stories feel fresh and new, and I’m amazed that they have a different writer and director on every segment, and it still all flows together. This might not be the best anthology movie out there, but if you get a chance, this one is worth watching. 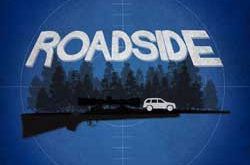