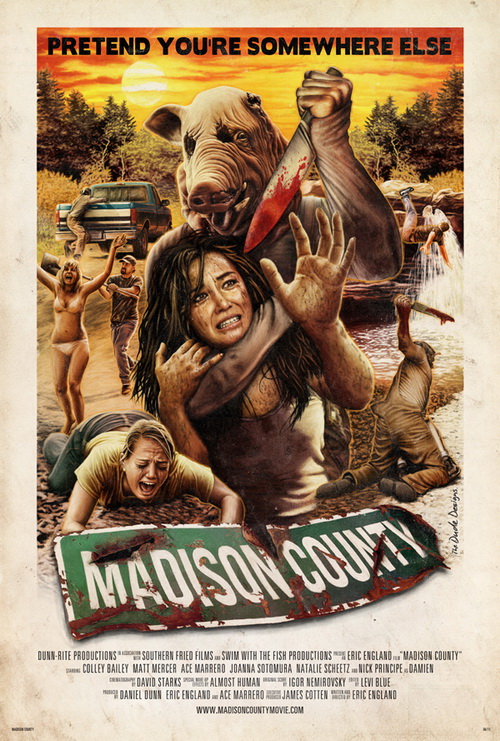 Madison County is the home of a local legend, tales of a series of gruesome murders committed by a ruthless, horrifying mass murderer named Damien. Fascinated by the stories and rumors, a group of college kids contact the author of a revealing book about Damien and travel to Madison County for an interview. Upon arriving in Madison County, they cannot locate the author and the locals deny that the killer ever existed. Digging deeper into the legends and searching for the missing author, the students begin to uncover the secrets and horrors of Madison County.

Here’s a likely pitch for Eric England’s Madison County: equal parts Texas Chainsaw Massacre and Wrong Turn mixed with a “Scooby-Doo” mystery where the killer wears a mask made from a frightening pig’s head. Despite how much it sounds derivative of these films, Madison County strives to take a unique swing at the Eighties slasher horror sub genre. The film admirably takes care in establishing its lead characters and their story. However, the script struggles with establishing a menacing antagonist, with Damien coming off as a Leatherface wannabe. The acting is solid and the direction is admirable with England spending a great deal of time bringing a healthy amount of character development. To its strength, by the time Damien enters into the picture, the film has established a connection to the college students and their relationships. Still, even with the killer stalking the kids in typical slasher fashion, the tension never reaches the level its script requires to make the latter part of the film work. The film’s effects are diluted by a lack of atmosphere and foreboding and a killer that lacks the visual threat of its famous counterparts: Leatherface, Michael Myers or Freddy Kruger. Madison County is an adequately entertaining slasher film that is stronger in its promise (both with this film and with future films from the director) than it is with its execution.

Madison County’s biggest asset is its director. Eric England displays great promise with his feature length film debut. He displays a solid style with attention to depth and location and an creative use of angles and camera work to build suspense and action without being excessive. While England sticks to the slasher film formula, almost to a fault, his film stands head and shoulders above many of its ilk. England’s work is focused always servicing the actors and the story with great care. Where the director’s efforts falter is in its atmosphere. England has trouble establishing the sense of menace found in films that inspired it: Texas Chainsaw Massacre, Wrong Turn. The same can be said of the killer, Damien. The mask, a full head of a large pig, is visually interesting but entire costume of the killer is underwhelming. Still, England is a director to keep an eye on.

The film also makes most of its cast. Colley Bailey and Matt Mercer are best friends James and Will. Joanna Sotomura is Will’s girlfriend Brook and Natalie Scheetz is her friend Jenna who she is fixing up with James. Along for the ride is Ace Marrero as Kyle, Brook’s brother, who has issues with Will. It’s a typical slasher movie formula – a essayed by this year’s remarkable Cabin in the Woods. Still, the cast makes the most of it creating an interesting group of kids with entertaining soap opera level drama: will James and Jenna hook up; will Will and Kyle come to blows. By the time Damien is introduced into the storyline, they manage to capture the audience’s compassion more so than many of the film’s contemporaries.

Visually, photographically, Damien is a terrific design. Much like Motel Hell (1980),the idea of a killer with the head of a pig is unnerving. The marketing shots of Damien are striking and intriguing; however, on film in motion, the rest of the killers appearance, his movements, his actions, his weapons, all fail to live up to the basic idea behind the striking visuals. It feels incomplete. The look needs much more care with light and shadow and framing to be as frightening as the film desires Damien to become. Damien is in need of a little more invention. His methods are unoriginal and straightforward with his ability to survive crushing blow and crushing blow predictable and flawed.

Madison County is a frustrating slasher film. It takes the standard Eighties slasher structure and executes it with precision and focus; however, it rarely takes any chances with the well worn formula which undermines the scares and tension. The few plot twists found in the final act are worth while and intriguing but nothing much is made of them in the end. With the acting being better than most modern independent slasher films and the direction displaying attention to character and emotion, the film exposes its weaknesses all the more with a underdeveloped killer and lack of atmosphere. Regrettably the effect results in a rather boring slasher film. 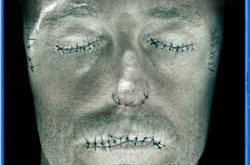 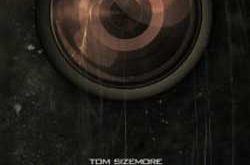