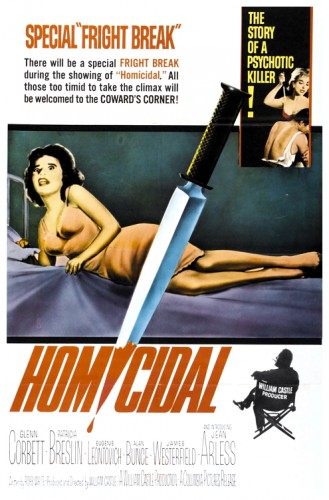 SYNOPSIS:
“Miriam Webster is happy when her half brother Warren and their childhood nanny Helga, now partly paralysed and unable to speak, return to the United States after a lengthy stay in Europe. Warren will soon turn twenty-one and will inherit their father’s $10 million estate and although she will get nothing – their father’s will specified that only a male heir could inherit – she’s happy in her circumstances. One person she doesn’t like however is Emily who came with Warren and Helga from Europe and now lives with them as a housekeeper/companion. Miriam has good reason not to like her as she seems to be a homicidal maniac. What Miriam doesn’t realise is that there is method behind Emily’s madness and a deep family secret that she is not privy to.” (courtesy IMDB)

REVIEW:
“The more adventurous among you may remember our previous excursions into the macabre – our visits to haunted hills – to tinglers and to ghosts. This time we have even a stranger tale to unfold – the story of a lovable group of people who just happen to be…homicidal!” Skeletons on wires above the audience, cinema seats that buzz the audience, fright-breaks giving cowardly customers a chance to escape, insurance policies guaranteeing against death by fright. They’re the creations of a filmmaker with the soul of a carnival pitchman whose goal was to scare the pants off America. It’s a matter of debate whether the films he made lived up to that goal, but there’s no denying that the delightful promotional schemes he came with made teenagers in the fifties and sixties step right up in droves, and made him one of the most beloved figures in the history of cinema. William Castle. 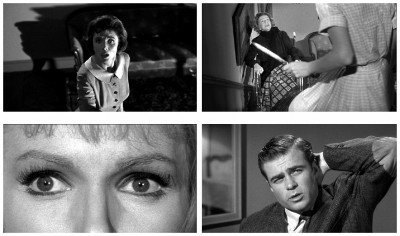 After fifteen years directing a string of B-grade movies for Columbia, Universal and Monogram, he mortgaged he house and formed William Castle Productions in 1958. His first release, Macabre (1958), was a modest thriller so, to draw attention to the film, he offered every audience member a thousand dollar life insurance policy from Lloyd’s Of London against death by fright during the film. Castle promoted the film with television commercials and previews that focused more on the life insurance policy than the film itself. The public bought it and the film was a financial if not critical success. Castle added a gimmick to most of his films over the next decade. 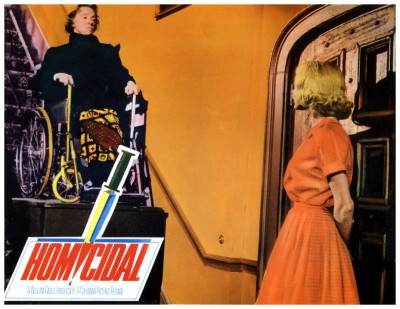 For Homicidal (1961) he came up with the ‘Fright Break‘ and ‘Coward’s Corner‘, a yellow booth manned by a bewildered cinema employee in the lobby. When the Fright Break was announced, and you couldn’t take it any more, you had to leave your seat and, in front of the entire audience, follow yellow footsteps up the aisle, bathed in yellow light. You crossed yellow lines with the message Cowards Keep Walking past a nurse who would offer a blood-pressure test. All the while a recording was blaring, Watch The Chicken! Watch Him Shiver In Coward’s Corner! As the audience howled, you were forced to sign a yellow card stating, I Am A Bona Fide Coward. Very few were masochistic enough to endure this. It’s no wonder cinema owners balked at booking a William Castle film, it was all just far too complicated. 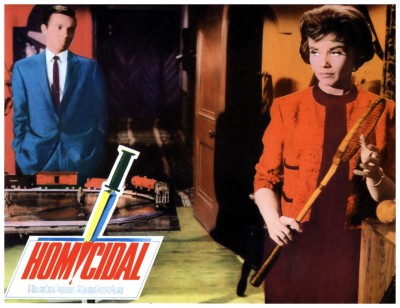 Not that Castle really needed gimmicks to sell Homicidal, arguably his best effort as director, and certainly Robb White‘s most complex script ever. A mysterious woman named Emily (Jean Arless) convinces a stranger she just met to take her to a local Justice of the Peace to get married hours after they met. But inside the chapel, Emily pulls out a knife and savagely murders the Justice of the Peace and flees. She later gloats of her deed to a mute invalid elderly woman named Helga (Eugenie Leontovich) who once worked as a nurse for their family. Police investigate and learn that the killer used the name of a local flower shop owner Miriam Webster (Patricia Breslin), who has an alibi for the night of the murder. It is revealed that Miriam and her cousin Warren (Jean Arless again) are heirs to Warren’s father’s estate. 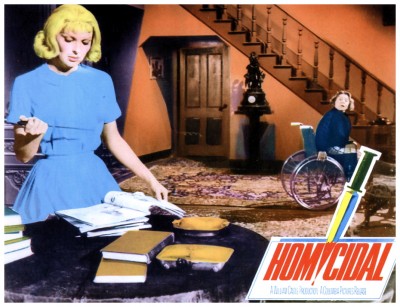 Miriam stands to inherit the estate if Warren were to die before marrying, and confesses to Warren that she was engaged to be married to her boyfriend Jim (Richard Rust). That evening, Emily breaks into Miriam’s flower shop and wrecks the store. When Miriam and Jim arrive at Warren’s house the next day they meet Emily. Helga frantically tries to communicate with Miriam, who finds out from Warren that Emily is his new wife. Having realised that Emily is the murderer, Miriam finds Helga dead and decapitated, and is attacked by Emily. Emily is defeated and her wig removed, revealing her as Warren. 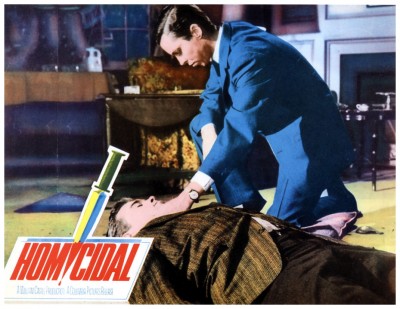 In the epilogue the police talk to Miriam as the truth about Warren comes out: Warren was born a girl but raised as a boy by Helga and the Justice of the Peace (who was present at the birth). This was done mainly to avoid the murderous wrath of Warren’s father, who wanted a boy and would have harmed the girl. ‘Emily’ was an identity Warren had created while overseas to be able to live as a woman away from those who knew him. When Warren’s father died he learned of the clause that would have denied him his inheritance, so he resumed the alter ego of Emily in order to kill and silence those who knew the truth about him. 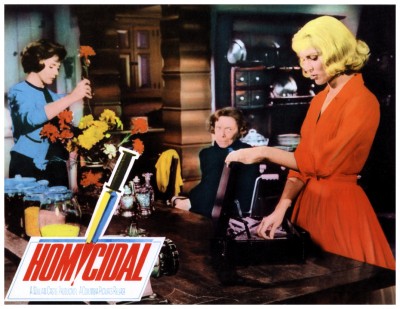 This was the only film credit for enigmatic star Jean Arless. Many have assumed this was her only film. In truth Jean Arless was actually actress Joan Marshall, who had appeared in television and films from 1958 through 1969 using her real name, then married Hal Ashby, director of Harold And Maude (1971), Shampoo (1975), Bound For Glory (1978), Coming Home (1978) and Being There (1979). For her male role in Homicidal, Marshall’s hair was given a crewcut and dyed brown, wear brown contact lenses and had prosthetic appliances to slightly alter the shape of her nose, mouth and hands. In order to carry off the deception, all of Warren’s dialogue was actually dubbed in by an (uncredited) male actor. Speaking of which, the dialogue makes repeated references to Emily, Warren and Helga visiting Denmark, the only place during the late fifties/early sixties where competent transsexual operations were being routinely performed. 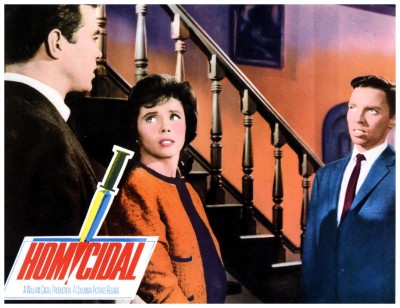 Homicidal was one of the most successful rip-offs…I mean tributes to Alfred Hitchcock‘s Psycho (1960). Castle and Columbia Pictures had Homicidal in cinemas a full year after the release of Psycho. The reason for the delay? Castle was still working on 13 Ghosts (1960) when Psycho was released. Time Magazine said, “It surpasses Psycho in structure, suspense and sheer nervous drive,” making it one of its top ten films of the year. According to Psychotronic Encyclopedia editor Michael Weldon, “Homicidal is really one of William Castle’s best movies. It is the number one all-time sex-change horror movie and, to this day, the identity of the killer is a mystery to people until the end of the movie. It still surprises. It was really well-made.” Critic Mark McGee agrees: “After Homicidal he started making real suspense movies without monsters in them. He made Strait-Jacket (1964) and The Night Walker (1964) and, with those pictures, he was Universal’s other suspense director.” 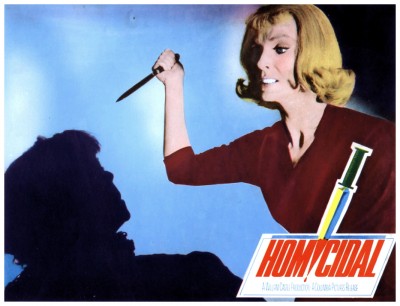 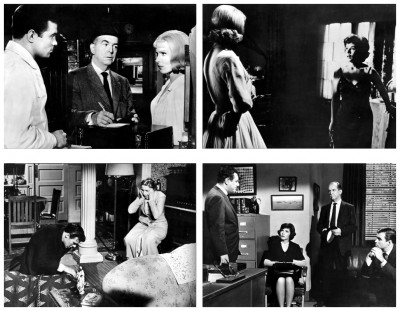 William Castle was a showman who is revered more today for the outrageous gimmicks he created to promote his films, than for the quality of the films themselves. He simply loved the show-business of moviemaking more than the art, and brought to his work a kind of carnival pitchman’s zeal, which is why he and his films remain in the memory. Had he not passed away of cardiac arrest back in 1977, I have no doubt Castle would have become one of today’s most popular guests of honour at film festivals and conventions everywhere. It’s a role I’m sure he would have enjoyed and would have played it to the hilt, to the immense pleasure of us all. Oh dear, I seem to have strayed from the subject at hand, haven’t I? But, since you’re still reading, I’m sure I can count on having your company again when I pick another forgotten fragment of filmic fluff from cinema’s lint trap next week for…Horror News! Toodles! 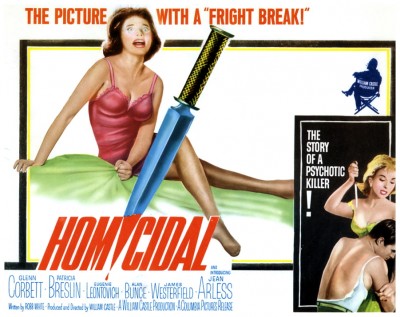