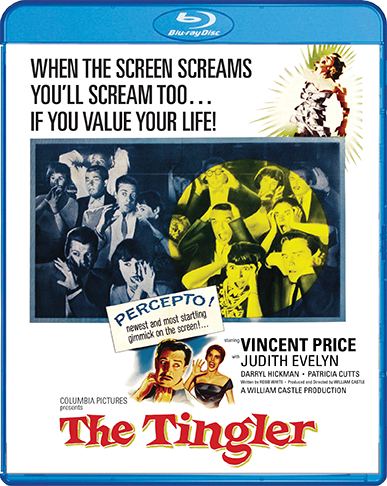 “The coroner and scientist Doctor Warren Chapin is researching the shivering effect of fear with his assistant David Morris. Doctor Warren is introduced to Ollie Higgins, the relative of a criminal sentenced to the electric chair, while making the autopsy of the corpse, and he makes a comment about the tingler-effect to him. Ollie asks for a lift to Doctor Warner, and introduces his deaf-mute wife Martha Higgins, who manages a theater of their own. Doctor Warner returns home, where he lives with his unfaithful and evil wife Isabel Stevens Chapin and her sweet sister Lucy Stevens. Doctor Warner, upset with the situation with his wife, threatens and uses her as a subject of his experiment. When Martha dies of fear, Doctor Warner makes her autopsy and finds a creature that lives inside every human being, feeds with fear and is controlled by the scream. Once Martha was not able to scream, the tingler was not rendered harmless and became enormous. When the living being escapes, Doctor Warner and Ollie chase it in a crowded movie theater.” (courtesy IMDB)

“I am William Castle, the director of the motion picture you are about to see. I feel obligated to warn you that some of the sensations – some of the physical reactions which the actors on the screen will feel – will also be experienced, for the first time in motion picture history, by certain members of this audience. I say ‘certain members’ because some people are more sensitive to these mysterious electronic impulses than others. These unfortunate, sensitive people will at times feel a strange, tingling sensation; other people will feel it less strongly. But don’t be alarmed – you can protect yourself. At any time you are conscious of a tingling sensation, you may obtain immediate relief by screaming. Don’t be embarrassed about opening your mouth and letting rip with all you’ve got, because the person in the seat right next to you will probably be screaming too. And remember – a scream at the right time may save your life.” 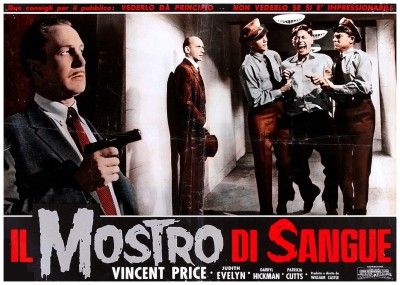 Skeletons dangling on wires above the audience, cinema seats wired to buzz the audience, fright-breaks giving cowardly customers a chance to escape to the lobby, insurance policies guaranteeing audience members against death by fright. These and other outrageous gimmicks designed to pull in more moviegoers may seem like the creations of a P.T. Barnum rather than a directorial master of suspense and terror. In fact, they’re the creations of a man who is a bit of both – a filmmaker with the soul of a carnival pitchman whose goal was to scare the pants off America. It’s a matter of debate whether the films he made lived up to that goal, but there’s no denying that the delightful promotional schemes he came with made teenagers in the fifties and sixties step right up in droves, and made him one of the most beloved figures in the history of cinema. William Castle. 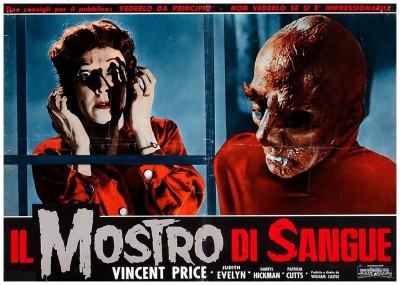 The box-office success of House On Haunted Hill (1959) was reason enough for Columbia Pictures to green-light Castle’s production of The Tingler (1959). Robb White was inspired to write the script after his encounter with a centipede while living in the British Virgin Islands. White had also experimented with LSD on Aldous Huxley‘s recommendation and decided to work it into the script, making it the first depiction of LSD use in a major film, a drug that was actually legal to purchase at the time. Pathologist Warren Chapin (Vincent Price) discovers that the tingling of the spine during extreme fear is due to the growth of a creature that every human being seems to have called a ‘tingler’, a parasite attached to the human spine. It curls up, feeds and grows stronger when its host is afraid, effectively crushing the person’s spine if curled up long enough. The host can weaken the creature and stop its curling by screaming. Cinema owner Oliver Higgins (Philip Coolidge), who shows exclusively silent films, is an acquaintance of Chapin’s. Higgins’s wife Martha (Judith Evelyn), who is deaf and mute, dies of fright after weird, apparently supernatural events have occurred in her room. 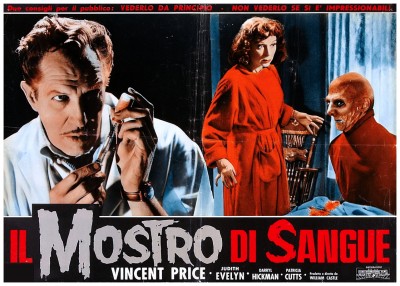 During her autopsy, Chapin removes the tingler from her spine. The centipede-like creature eventually breaks free from the container that held it in, and is released into the cinema. Chapin refuses to tell anyone, knowing it would only start a panic. The tingler latches onto a woman’s leg, and she screams until it releases its grip. Chapin controls the situation by shutting off the lights and telling everyone in the darkened cinema to scream. When the tingler has left the showing room, they resume the movie and go to the projection booth where they find the tingler and capture it. After they have contained the tingler and return to Higgins’ house, it is revealed that Higgins is the actual murderer – he frightened his wife to death knowing that she could not scream because she was mute. Guessing that the only way to neutralise the tingler is to reinsert it inside Martha’s body, Chapin does so. After he leaves, Higgins, who has admitted his guilt to Chapin, is alone in the room. As if by supernatural forces, the door slams shut and locks itself, and the window closes, echoing what happened just before Martha was frightened to death. 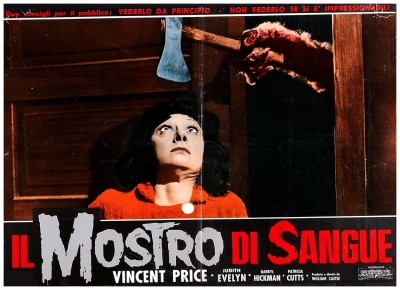 The tingler causes the body of Martha to rise from the bed, staring at her husband. Higgins is so terrified that he is unable to scream. The screen fades, and there is the sound of Higgins falling, either in a faint or dead. Amidst the darkened screen, Chapin’s voice says to the audience: “Ladies and gentlemen, just a word of warning. If any of you are not convinced that you have a tingler of your own, the next time you are frightened in the dark – don’t scream!” Vincent Price was on board again, with Patricia Cutts as his wife, Pamela Lincoln as his sister-in-law, and Darryl Hickman as his assistant. Castle convinced Hickman, who was Lincoln’s real-life fiancé, to join the cast as her fiancé in the film. Furthermore Hickman, who was only 178cm, had to wear shoe lifts for his scenes with Price, who was 193cm. Judith Evelyn, who plays the deaf mute, was hired at the request of Price who had worked with her on Broadway. She also received attention in another prominent non-speaking role as the suicidal Miss Lonelyhearts in the Alfred Hitchcock film Rear Window (1954). Dal McKennon, who played the projectionist, had a successful career as the voice of animated characters in both Woody Woodpecker and Gumby. By the way, the movie playing in the cinema when the tingler escapes is Tol’able David (1921). 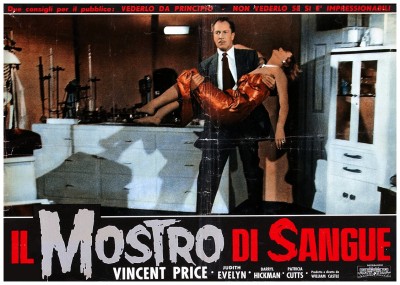 Castle was known as the King of the Gimmicks, and the one he devised for The Tingler is probably his most famous. ‘Percepto‘ was a gimmick where Castle attached small motors not unlike joy buzzers to the underside of some seats in cinemas where the film was screened. The buzzers were small surplus airplane wing deicing motors leftover from World War II. The cost of this equipment added US$250,000 to the film’s budget. During the climax of the film, the projected film appears to break as the silhouette of the tingler moves across the projector beam. The film goes black and Vincent Price‘s voice warns: “Ladies and gentlemen, please do not panic. But scream, scream for your lives! The tingler is loose in this theatre!” This cued the projectionist to activate the buzzers, giving some audience members an unexpected jolt, followed by a highly visible physical reaction. According to film historian Bill Warren: “People were actually shocked in the ass while watching The Tingler, even William Castle said this. It was a lie. What they had were tiny little motors that touched the bottom of the seat, and just vibrated the seat. But they never actually shocked anyone, that would have been just too much.” 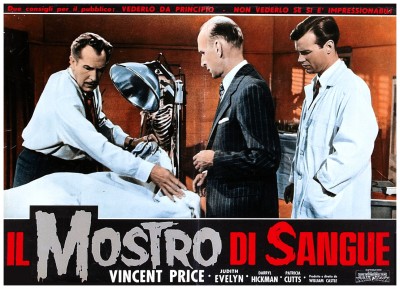 To enhance the climax even more, Castle hired fake screamers and fainters planted in the audience. There were fake nurses stationed in the lobby and an ambulance outside of the cinema. The fainters would be carried out and whisked away in the ambulance, only to return for the next screening. Although The Tingler was filmed in black-and-white, a short colour sequence was spliced into the film. It shows a sink (in black-and-white) with bright red blood flowing from the taps and a black-and-white Judith Evelyn watching a bloody red hand rising from a bathtub filled with bright red blood. Castle used colour film for the effect, accomplished by painting the set black, white and grey, and applying grey makeup to the actress to simulate monochrome. The film opened to generally positive reviews from respected critics like Lyz Kingsley (“No film made before or after it quite matches it for its mix of the imaginative, the creepy, the funny and the downright weird”) and Harvey O’Brien (“For all its flaws, The Tingler is very watchable and has been put together with enough canniness to be enjoyable on its own terms”). 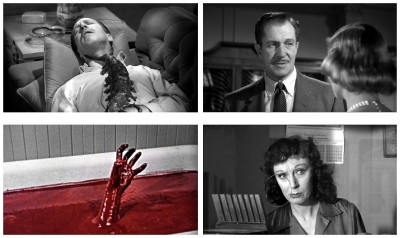 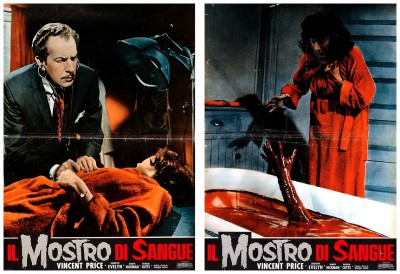 William Castle was a showman who is revered more today for the outrageous gimmicks he created to promote his films, than for the quality of the films themselves. He simply loved the show-business of movie-making more than the art, and brought to his work a kind of carnival pitchman’s zeal, which is why he and his films remain in the memory. Had he not passed away of cardiac arrest back in 1977, I have no doubt Castle would have become one of today’s most popular guests of honour at film festivals and conventions everywhere. It’s a role I’m sure he would have enjoyed and would have played it to the hilt, to the immense pleasure of us all. With that thought in mind I’ll thank you for reading, and look forward to your company next week when I throw you another bone of contention and harrow you to the marrow with another blood-curdling excursion through the darkest dank streets of Hollywood for…Horror News! Toodles! 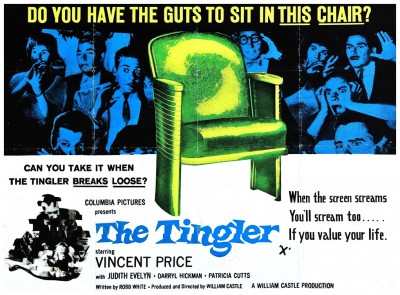 The Tingler (1959) is now available on bluray per shout Factory