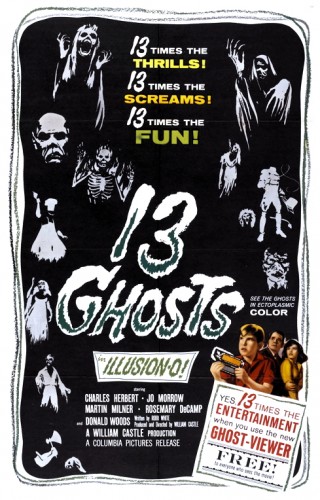 “Cyrus Zorba works at a local museum but is having trouble providing for his wife and two children. Their furniture has just been repossessed and they’re not too sure what they’re going to do when lawyer Ben Rush tells Buck his late uncle, a Doctor Zorba, has recently died and left him his house. The doctor, they are told, had perfected a way to collect ghosts. There are currently twelve living in the house, the doctor’s diary had space for a thirteenth. Who will be the thirteenth ghost to join them?” (courtesy IMDB)

Skeletons dangling on wires above the audience, cinema seats wired to buzz the audience, fright-breaks giving cowardly customers a chance to escape to the lobby, insurance policies guaranteeing audience members against death by fright. These and other outrageous gimmicks designed to pull in more moviegoers may seem like the creations of a P.T. Barnum rather than a directorial master of suspense and terror. In fact, they’re the creations of a man who is a bit of both – a filmmaker with the soul of a carnival pitchman whose goal was to scare the pants off America. It’s a matter of debate whether the films he made lived up to that goal, but there’s no denying that the delightful promotional schemes he came with made teenagers in the fifties and sixties step right up in droves, and made him one of the most beloved figures in the history of cinema. A true king when it came to horror-movie hype. His name? William Castle. 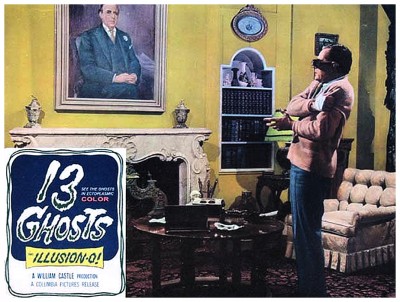 Castle’s fourth horror film – after Macabre (1958), House On Haunted Hill (1959) and The Tingler (1959) – was 13 Ghosts (1960) written by prolific Castle regular Robb White. When occultist Plato Zorba (Roy Jenson) wills a huge ramshackle house to his nephew Cyrus (Donald Woods) and his impoverished family, they are shocked to find out that the house is haunted. Their new furnished residence comes complete with a housekeeper named Elaine Zacharides (Margaret Hamilton) plus a fortune in buried treasure and twelve horrifying ghosts, including a wailing lady, clutching hands, a floating head, a fiery skeleton, a jealous chef murdering his wife and her lover in the kitchen, a hanging lady, an executioner and decapitated head, a full-grown lion with its headless tamer, as well as Plato himself, all held captive in the eerie house looking for an unlucky thirteenth ghost to free them. 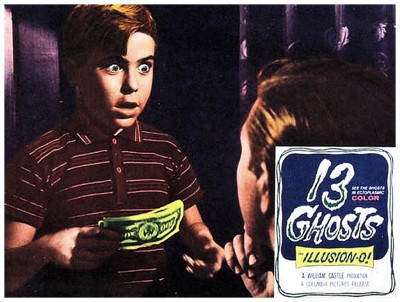 Plato also leaves a set of special goggles, the only way of seeing the ghosts. However, there is someone in the house who is also looking for the money and is willing to kill for it. The real villain of the film turns out to be the lawyer Benjamin Rush (Martin Milner). He attempts to kill young Buck Zorba (Charles Herbert) using the same bed canopy he used to kill Plato with, but Plato’s ghost catches him in the act, driving the immediately terrified Rush to his death in the bed just as Buck escapes, Rush becomes the thirteenth ghost, and then the ghosts disappear. The next morning, Cyrus and his family count the money, Buck keeps the mask used by Benjamin Rush to scare Buck’s big sister Medea (Jo Morrow) and they decide to stay. 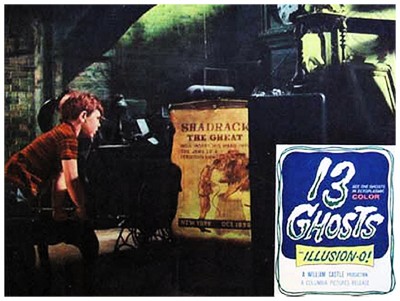 As with most of his productions, William Castle used a gimmick to promote the movie. For 13 Ghosts, audience members were given a choice: the brave ones could watch the film and see the ghosts, while the apprehensive among them would be able to opt out of the horror and watch without the stress of having to see the ghosts. The choice came via the special viewer, supposedly left by Doctor Zorba. In the cinemas, scenes involving ghosts were shown in a process called ‘Illusion-O‘ in which the filmed elements of the actors and the sets – everything except the ghosts – were displayed in regular black-and-white, while the ghost elements were tinted a pale blue and superimposed over the frame. Audiences received viewers with red and blue cellophane. Choosing to look through the red filter intensified the images of the ghosts, while the blue filter removed them. 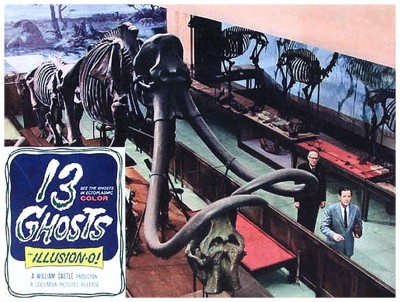 Although the blue filter did screen out the ghostly images, the ghosts were visible with the naked eye, without the red filter. According to critic Mark McGee: “A lot of people have thought over the years that the film was in 3-D because of these viewers, and that’s not the case. They did something with infrared light, and if put the viewer up to your eyes when they say to use the viewer – the ghosts are coming – you could see the ghosts better. Or you could use the other colour which completely obliterated the image from the screen. If you didn’t use the viewer at all you could kind-of see them anyway.” Because the ghosts were indeed viewable by the naked eye, the movie ran for years on television with no viewer needed to see the ghosts. DVD editions have varied in their preservation of the Illusion-O effect, with the latest DVD release including versions with and without the ghost outlines and a set of special viewers. 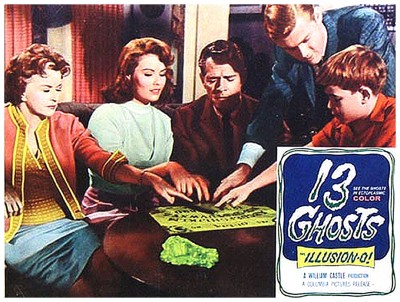 13 Ghosts also features one of Castle’s more interesting casts. Martin Milner (as Benjamin Rush) is best known for his performances in three popular television series: Route 66, Adam-12 and Swiss Family Robinson. Rosemary DeCamp (as Hilda Zorba) appeared in sixties television series Rawhide, Ensign O’Toole and Breaking Point. In the seventies she played the grandmother of The Partridge Family clan and, by the eighties, she could be seen as Buck’s mum in Buck Rogers In The 25th Century as well as the title role in Memoirs Of A Fairy Godmother. Donald Woods (as Cyrus Zorba) was a television constant, from the early days (Craig Kennedy Criminologist, Robert Montgomery Presents, General Electric Theatre) through the sixties (Tammy, Bat Masterson, Wagon Train, Ben Casey, 77 Sunset Strip, Hawaiian Eye, Coronet Blue and Ironside). 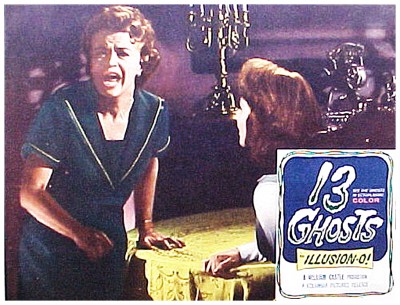 Roy Jenson (as Plato Zorba) was a prolific character actor seen in such films as Warlock (1959), How The West Was Won (1962), Our Man Flint (1966), Soylent Green (1973) and Chinatown (1974), and worked frequently with actor Geoffrey Lewis as well as directors John Milius and Clint Eastwood. Castle convinced eleven-year-old child actor Charles Herbert (as Buck Zorba) by offering him top billing on 13 Ghosts, Herbert’s third and final film ever, completing his acting career on television. Throughout the film, Herbert often refers to veteran actress Margaret Hamilton (as Elaine Zacharides) as a witch, an acknowledgement of Hamilton’s best known role as the Wicked Witch Of The West in The Wizard Of Oz (1939). 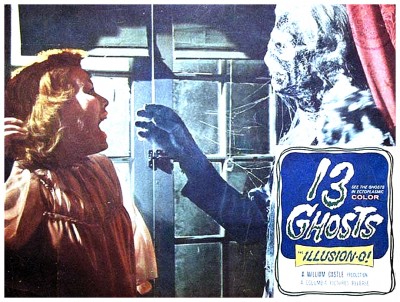 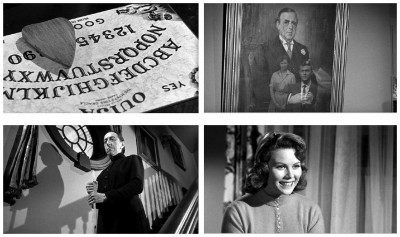 William Castle was a showman who is revered more today for the outrageous gimmicks he created to promote his films, than for the quality of the films themselves. He simply loved the show-business of moviemaking more than the art, and brought to his work a kind of carnival pitchman’s zeal, which is why he and his films remain in the memory. Had he not passed away of cardiac arrest back in 1977, I have no doubt Castle would have become one of today’s most popular guests of honour at film festivals and conventions everywhere. It’s a role I’m sure he would have enjoyed and would have played it to the hilt, to the immense pleasure of us all. And it’s with that thought in mind I bid you farewell, and please join me again next week as we see what the postman leaves on my doorstep – and sets on fire – in Horror News! Toodles! 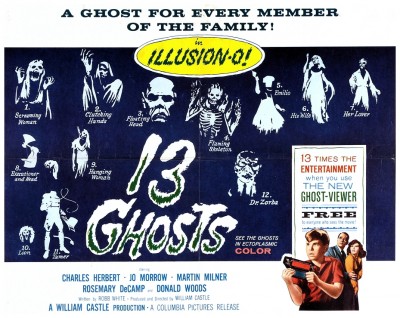