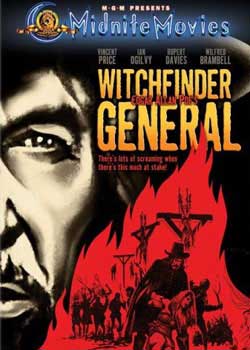 Set in 17th-century England, this chilling tale follows corrupt official Matthew Hopkins (Vincent Price), who claims an ability to discover witches. But he uses his power to gain money and favors from people he’s fingered in return for declaring them innocent. When he arrests and tortures Father Lowes (Rupert Davies), Lowes’s niece’s fiancé (Ian Ogilvy) decides to put an end to Hopkins’s sleazy practices and goes on a quest to seek vengeance.

Back in the late 60’s, early seventies film-goers saw a period of several witch hunting based films that caem into creation as a subject of interest. With these films came a range of on screen brutalities exploiting murder and torture scenes that were quick to get banned by the film boards. Witchfinder General was one of the films produced at that time. Even with it’s banned controversial scenes and edited releases it was by far not nearly as graphic as some of other like films produced.

The themes were pretty similar dealing withppointed witch hunters who were corrupt and misguided in there perspectives. The direction always involved taking advantage of the innocent and wrongfully accused.

Witchfinder General stars legend Vincent Price as Matthew Hopkins, a lawyer who has been given the blessings of the law & church to roam the country and execute those accused of witchcraft or Satanic activity. In the film, Hopkins has partnered with an assistant by the name of John Stearne (Robert Russell). Stearne enjoys doing the dirty work as often as he can.

As it is explained, the time is 1945 and England is in the midst of Civil War. With it the structure of law and order has collapsed. Superstitions run high and with the full blessings of the church what law there is, is carried out by these witch hunters. The hunters are usually summoned by towns that have accused an individual of sorting with the devil through very thin if not absent degrees of evidence.

The witchfinders have gone corrupt with power and so as a result many wrongfully accused suffer sever torture while being coaxed into confession to face certain death. Hopkins has become as corrupt as they come…..cold, impassioned and blinded by his newfound power.

Under the umbrella of doing the Lord’s work, he subjects victims to interrogation using several brutal methods of torture. One popular technique involves the poking of a sharp object into the back of the accused to find the “devils mark”. The devils mark is described as an area where the sufferer feels no pain or emits bleeding from the wound. The reality is that the victim eventually passes out from the torture and stops screaming altogether. Once the accused gives into torture and confession, they are hanged, drowned or burned alive per way of a slow descent into fire.

Our story centers around the recently engaged couple Richard and Sarah. Richard is a visiting soldier who has received the blessings of Father Lowes, Sarah’s uncle for her hand in marriage. Shortly after the visit, the towns folk accuse Sarah’s uncle of witchcraft regardless of the fact that he is the local preacher. Lowes is confronted by Hopkins, tortured, placed in custody and eventually killed. When Richard discovers what has happened he takes an oath to avenge his fiance and murder those responsible fro this unjust death. Hot on the trail, Richard seeks out Hopkins and Sterne to execute them for their commited atrocities, even at the threat of being labeled a deserter by his military base.

While I found the film to work for the intended subject matter, the “Witchfinder General”even with restored scenes was pretty light fair for witch hunter style films. For a much stronger, evil, and macabre version, you’d be better off with the film “Mark of the Devil”.

While each film covers the same subject matter, “Mark of the Devil” hits its mark in an unforgettable way. Vincent Price, a talented actor portrays a rather diabolical role in “Witchfinder General”for what we are used to seeing him in. His level of corruption is enhanced by his willingness to take in sexual advances in exchange for some leniency on the accused.

Though as we are subjected to the degrees of trickery these men used to bend the laws in their favor, justice still finds a way to prevail. This resolution feels more like a Hollywood pressured ending than how things really went down though it’s not a bad film at all. It’s not Saturday afternoon creature show material either but it does get the point across. Special points go to Price for a memorable performance. The material I’m sure had quite a different response in the era it was show, though for todays standards it is nothing overly special.