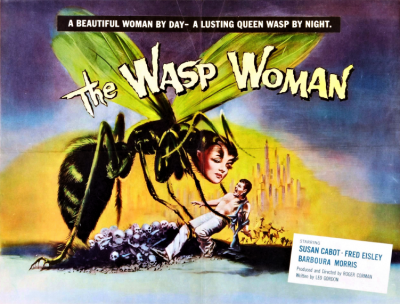 “Janice Starlin, the owner of a cosmetics firm, sees that her fading beauty is not only causing waves in her personal life but causing some prestige problems for her also-fading business. She becomes an easy mark for a pseudo-scientist, Eric Zinthrop, who claims to have developed a serum from the enzymes of wasps that will turn aging skin to youthful-looking skin. The second-best thing to a time machine. She, without any hesitation, agrees to be the first human to try Zinthrop’s injections. But, as her beauty returns, her secretary, Mary Dennison, and her advertising executive, Bill Lane, notices she is also having a personality change and it isn’t for the better, albeit she was no Miss Congeniality to begin with. Then Zinthrop gets hit by an automobile for plot-development purposes, and is somewhat incapacitated and not in any shape to be whipping up any new batches of Zinthrop’s Wasp Enzyme Injection Serum and, without her enzyme injections, Janice turns into a wasp-like woman and meaner that a yellow-jacket hornet. Several people don’t live to regret coming into contact with her, and this is not good for the business, either.”

REVIEW:
This week’s film once again comes from my old friend and darling of the Public Domain, Roger Corman. Directed by Roger and filmed in a mere five days, The Wasp Woman (1959) stars the lovely Susan Cabot as proto-yuppie Janice Starlin, CEO and the public face of a large cosmetics company she herself has built up from nothing.

The Wasp Woman is seen by some as Roger Corman’s heart-felt protest at how society undervalues women over the age of forty, as true today as ever. Others argue The Wasp Woman is evidence of Roger’s sincere belief that a shameless rip-off of The Fly (1958), a big money-earner for 20th Century Fox the previous year, would earn similar profits for him. Either or both are possible. Roger was known to have a social conscience and, although he didn’t work for major Hollywood studios, he was also known to fully endorse their core motto: If it sells, copy it.

The most spectacular and puzzling thing about the The Wasp Woman is probably the poster art it inspired – a man in the clutches of a gigantic wasp – yet there’s nothing in the film to suggest such a moment. How to explain it? A publicist with no respect for the truth? Well, I never! Despite the brevity of the shooting schedule, The Wasp Woman demonstrates Corman was not a completely talentless director. His obscure but extraordinary masterpiece The Intruder (1962), a film many mainstream directors would be proud to have in their resumes, was limited only by a small budget, as was (to a lesser extent) The Masque Of The Red Death (1964). I hope Steven Spielberg is reading this.

The Wasp Woman was written by Leo Gordon, who worked with Roger Corman several times as both writer and actor. He wrote screenplays for Jack Nicholson’s screen debut The Cry Baby Killer (1958), as well as Attack Of The Giant Leeches (1959) and The Terror (1963). Gordon also wrote a number of B-Grade Westerns, but as an actor he had played a mad killer in Don Seigel’s Riot In Cell Block Eleven (1953), and had his best role as the unlikely hero in The Intruder (1962). Viewers of The Young Indiana Jones Chronicles might remember an episode in which he played the elderly Wyatt Earp. 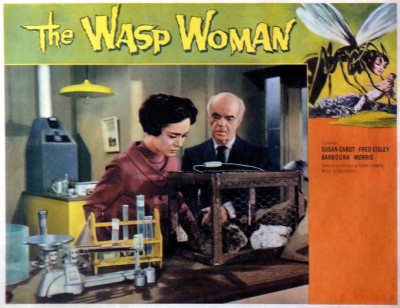 As might be expected there are several other Roger Corman regulars in the cast and crew of The Wasp Woman. Mary Dennison is portrayed by Barboura Morris, whom you would remember as the charming beatnik Carla from A Bucket Of Blood (1959). Frank Wolff, the senior villain in the definite-article-deficient Beast From Haunted Cave (1959), has a bit part as bed-delivery man with the moustache. 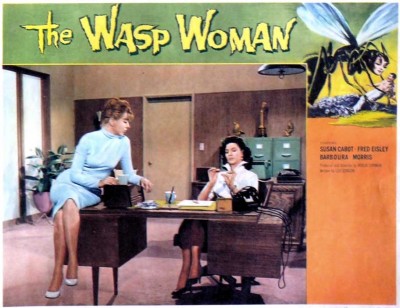 Perhaps most interesting is Bruno Ve Sota, who plays the portly night watchman and second victim. Not-so-youthful viewers may remember him as the bartender in Bonanza – he only did it for thirteen years! He had bit parts in Rock All Night (1957), Attack Of The Giant Leeches (1959) and A Bucket Of Blood (1959), amongst many others for Roger Corman, and was himself a director of low budget films. Female Jungle (1955) with Jayne Mansfield and John Carradine is, if not exactly a masterpiece, an interesting film well worth seeing. Ve Sota also produced Dementia (1955), which train-spotters…I mean ardent film buffs will recognise as the midnight movie in The Blob (1958), seen just before said gooey nemesis shows its disdain for quality cinema, eats the projectionist and and oozes onto the unsuspecting audience below. 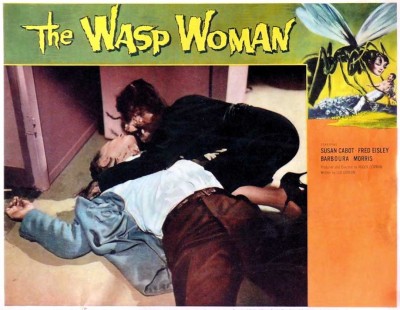 Professor Zinthrop, played by Michael Mark, is not really your typical Mad Scientist. He means well and isn’t even remotely ruthless. But like most mad scientists, he obviously doesn’t go to see many horror films or he would know that experiments like this always bring nasty and dangerous side-effects. He really should get out more. When he discovers his formula is cruel for cats, he would have warned Janice, had he not been knocked down by a car. He should get out more, and he should watch where he’s going while he’s at it. His second biggest mistake came when he stopped researching bees and started on wasps. The bees have always been our friends and would never turn against us, but wasps are such sinister, malevolent looking creatures, he should have realised at once that meddling with their enzymes was bound to end in tears. 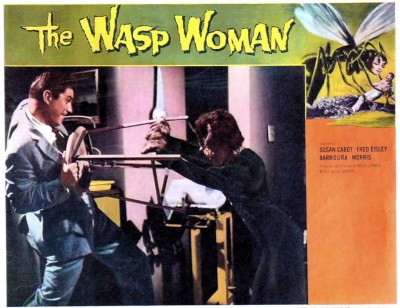 As Janice Starlin, Susan Cabot had one of the best roles of her career. Thirty-one years old at the time of filming, she’d acted in films and television for some ten years and was often cast as an Indian in westerns such as The Battle Of Apache Pass (1952) and Ride Clear Of Diablo (1954), but finally hit the big-ish time with a lead role in Corman’s Sorority Girl (1957). During the making of The Wasp Woman she suffered for her art. It was the filming of her final scene that placed actress Susan Cabot in serious peril. With no time to lose, Roger Corman insisted on doing the scene in one take. All went well during the rehearsal but not during filming. The acid bottle was only filled with water, but when it hit Susan in the head it was like a rock. She thought her her lower teeth had been pushed into her nose, but showing true dedication to her art she carried on regardless. She ducked out-of-frame briefly while the props man sprinkled liquid smoke on her mask, but he used too much, and she crashed through the window, choking on the smoke. The cheap mask was one of the film’s biggest problems, and apart from being so unimpressive that its never shown clearly, it only had two small nostrils to breath through. Someone finally realised Susan was in distress and poured water on her, and she was then able to tear the mask apart. 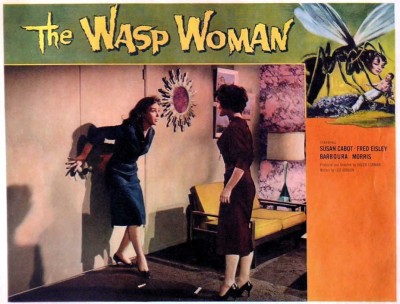 Susan Cabot soon tired of the dangers of low budget productions and retired from acting, but in 1986 the Grim Reaper she so narrowly avoided had his way when she was murdered by her own son, Timothy Scott Roman. The twenty-three year-old was mentally ill and beat his mother to death with an iron pipe. He first told the police the crime was committed by a Latino Ninja, which oddly enough they found a little implausible. He pleaded insanity, blaming experimental growth hormones for his neurological problems and, since he obviously couldn’t tell the difference between his mother’s film career and real life, the court returned a verdict of Involuntary Manslaughter.

I’m sorry to be leaving you with such a bleak and sad image but, be warned, I will not accept that as a valid reason for your not returning next week. I’d miss you too much. So please join me again as I discuss the brutal slashing of budgets and death by a thousand cut corners for…Horror News! Toodles!