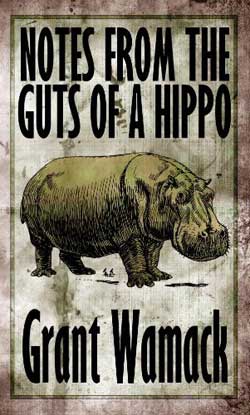 Notes From the Guts of a Hippo starts out in the tradition of any good action movie; fast, loud, and in your face. Jay Robbins, our protagonist, gets a call to drop everything and go to Brazil in search of a journalist who has disappeared while researching the Lastiz, a rare breed of hippopotamus. He jumps in a cab to head for the airport, but it is immediately smashed by a runaway truck. So he steals a car and resumes his trip. This is all within the first few pages. No time to get comfortable, the author is jumping in headfirst and pulling us along for the ride.

This is Grant Wamack’s first novella. He’s had a handful of short stories published here and there over the past few years, not to mention three hip-hop albums released under the name GS. But it’s with Notes From the Guts of a Hippo that we get a full taste of what exactly is going through the mind of this young writer. And let me tell you, it’s a little scary in there.

Jay meets up with his guide, Eric, who soon spontaneously combusts, leaving a pile of organs and bones. This just before men in black suits, literally IRS agents from Hell, come looking for a drifter they had been seen with and begin firing at will. Just when Jay thinks he’s lost and alone in an unknown place, what’s left of Eric returns. Turns out he made a deal in Hell in order to come back for a bit. So off they go, Jay and a walking (make that floating) pile of organs with Eric’s personality and voice, on a quest for a hippo. And it only gets crazier.

As we continue on our journey with Wamack, we realize why our protagonist Jay thinks that trouble always finds him. It’s because it does, starting with the seemingly gentle old couple who first help him out when he needs water, then grab their flamethrowers and attack the natives, doing their best to re-enact parts of Cannibal Holocaust. There are cactus-headed monkeys, birds that poop acid, forgiving fish, and a giant moth that gestates inside a human body. And then there is the idea of where they are going. The title of the book is Notes From the Guts of a Hippo, right? That is exactly where they are headed in order to find the lost researcher, inside the mystical Lastiz hippo, into a whole new world, albeit a somewhat uncomfortable one.

The good thing about this book is that, no matter how crazy all of this sounds (and believe me, it gets crazier, I’m just not going to spoil it for you), the author manages to find a way to make all of the seemingly unrelated, random weirdness work together to make an interesting story. It’s definitely out there, and we, as readers, need to suspend our disbelief, but don’t we always? It’s kind of like if Indiana Jones had horrible luck and got thrown into a bizarro world. And, for the most part, it works.

The bad thing about this book is the dialogue. It often didn’t work for me. Overall, it felt very forced, not very realistic. Not always, but most of the time, which is a shame because the characters are otherwise distinct creatures working together in the world of Wamack’s twisted mind. But when they interact, they often come across with the same voice. There are a couple editing issues here and there, and a couple times when the writing falls into a “then this happened, then this happened…” pattern. But the important part is that the ideas are there, the originality and the creativity and the ability to explore these things. Better dialogue can be learned, editing can be improved, but without the ideas a writer is nowhere. Grant Wamack has the ideas, and as he grows as a writer, I eagerly await more of his work.