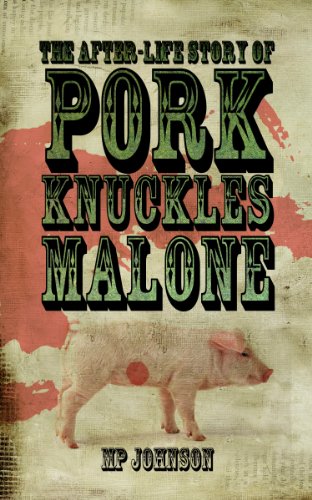 It’s no secret that I have found myself fascinated by the releases that Bizarro Pulp Press has been dishing out over the past year or so. Not only are they bringing around new authors I haven’t read before, but every book hits me with something completely different. From serial killers to art criticism fairy tales to reality-bending and time detectives, every story hits you in a different way. The After-Life Story of Pork Knuckles Malone (from here forward to be referred to as simply Pork Knuckles Malone) is no different.

This is author M. P. Johnson’s first book. Previous to this, he has been very busy. He’s had bizarro/horror short stories in a variety of both print and online publications. He has appeared in a couple independent horror movies (Health Freaks and Doomed to Consume). He has been a writer and music reviewer for Razorcake magazine for many years. He even co-wrote lyrics to the song “…And Toxic Justice For All” by Minnesota punk/thrash band In Defence (one of my favorites!). And now, with Pork Knuckles Malone, he gives us the story of a young boy and his pet pig.

Actually, this book starts at the very end of the story of a young boy and his pet pig. It starts right about the time when Daryl’s pa slaughters his son’s pet pig, named Pork Knuckles, and turns him into ham. Daryl is devastated, much as a twelve year old boy would be when his favorite pet dies. But rather than grieve like a normal human being, he instead steals the ham, puts it in his backpack, and runs away from home. He decides that he will go to his aunt and uncle’s place in Green Bay, Wisconsin and stay there, taking his pa at his word all the times he’s said that he doesn’t have time to run all over tarnation looking for him. This is where things start to get a little weird.

The adventure begins when Daryl decides to hitchhike rather than risk being run off the road on his bike. Lucky (or unlucky) for him, a van pulls over and picks him up. The driver, Gus, is a hippie vegetarian, but as soon as he picks up the boy he begins craving a ham sandwich and singing old rock songs with the word “ham” substituted in place of others. He drives him to Green Bay and they part ways, Daryl looking for his aunt and uncle, Gus looking for a deli that serves the best ham sandwiches. And then things start to get a little bit weirder.

At the same time, Daryl’s dad begins to get worried. He knew his son had left, he heard him leave but figured he’d let him blow off a little steam. When he goes looking for him, he finds a crudely made image of his son in a little hut Daryl had made for his pet, eerily reminiscent of the pig’s head on a stake that Simon finds in Lord of the Flies, except the name “Darril” is mis-spelled on the wall near it, written in pig poop. Pa realizes something is going wrong and adventures out to find his son. And then things just go all out bat-poop, or more appropriately, pig-poop crazy.

M. P. Johnson’s book reminds me of a movie like Brain Melt in the way that it’s not so much about how it ends (although in both that movie and this book, the ending is pretty awesome), but more about what happens on the way. The characters we meet on our journey with the boy and his ham are equally memorable and insane. There’s a weird cult of praying mantis-masked weirdos in the meat cooler, a busload of drugged-up, blood-thirsty drag queens, and a underground battle royal going on in the basement of a local bar. There’s Uncle Shard’s punk band, a Hitler-loving fly who reincarnates into something much more fearsome, oh and did I mention the mind-controlling dead pig in the form of a ham that sends green ooze out of those it comes in contact with? Splatterpunk indeed.

Pork Knuckles Malone is written in a very crisp, clear language, getting straight to the point of the story but with language that paints a vivid picture. The characters are great, and the end is something out of left field that could easily make the reader laugh and say “huh?” all at the same time. It is both laugh out loud funny and disgustingly sick, while all the while actually telling a somewhat heart-warming story about a sad boy who misses his best friend and the father who he thinks is too callous to care that he is gone. It is very short, weighing in at just ninety-one pages, so can be consumed in one gore-filled sitting. If you like your horror with a heaping of bizarre, and don’t plan on eating pork in the next few days, The After-Life Story of Pork Knuckles Malone is ready when you are.