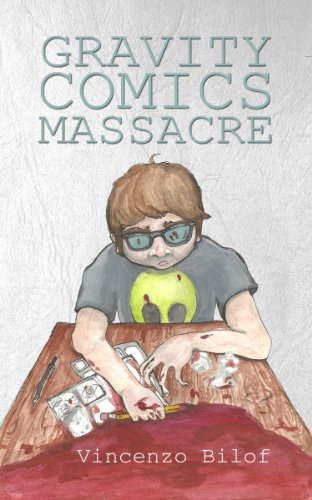 Vincenzo Bilof has given us zombies (the Zombie Ascension series,Under A Red Sun, and Nightmare of the Dead), he’s given us werewolves (Japanese Werewolf Apocalypse series), and he’s even given us a horror poetry-novel (The Horror Show). In Gravity Comics Massacre, he manages to combine some familiar horror elements with his own vision for a new and original tale. Think Texas Chainsaw Massacre meets Nightmare on Elm Street with a pinch of Buffalo Bill and a dash of Tales From the Darkside, and you’ve got a foot in the water, checking the temperature and getting a feel for what to expect when you jump in. But then add in comic books, aliens, drugs, and a ghost town, and you’ve got yourself a Bilof original.

Right from the start, we are introduced to the killer. Damien Shears, the owner of Gravity Comics, has a man tied up in his store. He tells him about the pen he is holding, how it came from aliens, how aliens are behind everything good, and how these aliens need him to kill people because they are collecting data. This is the reason for the human skin draped all around the room. And then Damien begins drawing his victim, and we see the innocent man fall asleep and begin dreaming. In his dream, large spiders begin filling his room and crawling all over him, one of his greatest waking fears. This will be the final nightmare he ever has before his flesh is removed and similarly hung about Damien’s store.

After the quick introduction, we get into the main story and meet the five friends (I use that word loosely) who are on a road trip to check out Hooksville and the legendary comic book shop. Brian, or Brain as he is nick-named, is the protagonist, a somewhat nerdy guy who is most excited about the trip. Jack is a bully-type, but one who has taken a liking to Brain, and one who has ulterior business-related motives for coming along. Jamie and Kirk are two of Jack’s drug friends. Jamie is a party girl dating Kirk and getting with Jack on the side, Kirk is an abusive  drug user. And then there is Miko, an Asian stripper whom Brain has an eye on but assumes would never even give him the time of day. Not a single one of them is a likeable character, a perfect quality for a group of potential victims in a slasher-style story. When they arrive at the deserted area, they go in separate directions to explore, while Brain passes out in the van. One by one, they encounter Damien, with varying end results.

Or do they? Part of the intrigue of Gravity Comics Massacre is the way it is laid out. We follow the group for a bit, then the next chapter seems to find us in the middle of an appointment between Brain and a psychologist, discussing his dreams and hallucinations about his friends all dying in a mysterious, made up town. Or is that a dream he’s having while passed out? At one point, Brain even references the movie Inception, providing either a tip for the confused reader or a tricky red herring. We start to question our own theories as we read, asking ourselves if Damien Shears is real, or a figment of Brain’s imagination, or maybe a little of both. Any time an author can have us questioning what we believe to be the reality of the story without devolving into confusion or absurdity, that is a sign of a good storyteller. And that is exactly what we have here.

Gravity Comics Massacre is a short but intense novel that fits in the library of any fan of horror, bizarro, or even graphic novels. It is well written and does more than just tell the story of a killer and his victims, it demands that the readers involve themselves in the story and decide what is fact, what is fiction, and where is the line that divides the two. Right alongside the gruesome murders, of which there are plenty, there are numerous references to the world of comic books, including a debate of who is more important, Batman or Superman. And then there is the end. I’m certainly not going to spoil it, but I feel fairly confident that I can say it is not what most readers would have expected. With each of his stories, relative newcomer Vincenzo Bilof has given the world of horror fiction a different taste of what he is capable of. Gravity Comics Massacre expands that world even further, grabbing the attention of more and more readers. I expect that trend will be continuing with each new release. 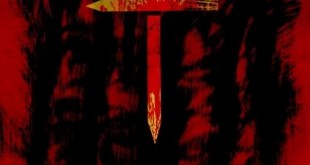