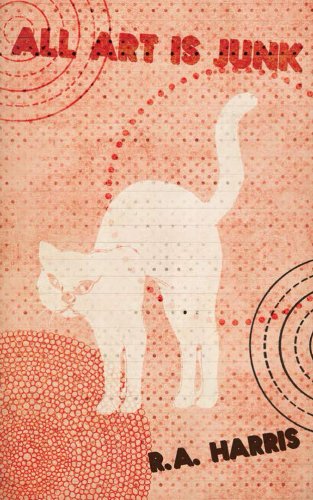 Once upon a time, in the future, there lived a young girl named Lana who painted beautiful pictures with her paintbrush hair. Lana’s mother saw great potential in her, and so arranged a bodyguard to watch over her at all times and keep her safe. One day, Lana’s father, Mansell Rivers, a sensitive and unsuccessful artist, decides that he wants her dead. It is up to her keeper to protect her. And so begins the fairytale like story that is All Art is Junk, the debut novel by R. A. Harris. But the story is hardly as straightforward as a simple fairy tale.

In Harris’ dystopian future, a great flood has wiped out nearly all of the life on Earth. All, that is, except for the people who had moved to The Installation, the world’s largest piece of art, just off the coast of England. We’re talking island-sized art here. And the keeper that Lana’s mother, Jessica, has assigned the task of keeping her daughter safe is a cyborg. Actually, a double cyborg. Part Lancelot, part Cilia, both with their own personalities and skills. Unfortunately, around the same time that Lana’s mother created Lancelot/Cilia, her father also created his own two-headed cyborg, but gave it dinosaur heads. And it can transform into a chariot as well. It’s all the better then that Lana has her own protector once her father kills the rest of her family and starts coming after her.

All Art is Junk jumps back and forth, between back story chapters and flashbacks to the present account of Lancelot’s quest to find Lana, with the opening scene happening somewhere in the middle of it all. Lancelot (whose nickname, by the way, is “Junk”) does not have an easy path ahead of him. After re-checking the night club where he lost track of Lana, he has to jump hurdle after hurdle to catch up to her. There are metal fetishists with car part costumes and flying tire vehicles. There are animal fetishists, a group who have domestic animals on their fists as weapons. There are giant totems made up of people, which reminded me of the giants comprised of people in the Clive Barker story “In the Hills, the Cities,” from Books of Blood, Volume 1. There is the older woman with the cat on the leash who keeps repeating the same mantra over and over, making it difficult to decide whether she is worth saving or not. And there is the constant drum beat, playing from who knows where, and getting louder and louder, maybe for a reason.

Alongside all of the adventure and tension of Lancelot’s quest, Harris manages to also make some observations on art and fashion, as well as society’s role and place within both worlds. The nice thing is that not once does this seem out of place or preachy, but instead reveals itself a necessary aspect of the story.

All Art is Junk is a very intelligent, very well-written novel. Harris’ style leans more toward the literary and poetic as far as word choice and descriptions, but the story itself falls somewhere in the realm of sci-fi/bizarro/adventure/fairy tale. The format jumps back and forth between first person (from the perspective mostly of Lancelot) to third person (usually when giving more backstory/flashbacks). At first, this may be jarring, but it quickly becomes routine as each very short chapter gives us more of a glimpse into a dangerous world we find fascinating and that we hope we never live in.

I give a definite vote of confidence to both the novel All Art is Junk as well as the writing, both present and whatever may come in the future, of R. A. Harris. At just over one hundred thirty pages, this book is packed with art criticism, fascinating worlds and characters, and great, smart writing, not to mention yet another great cover design by Matthew Revert. The book is original and exciting, and I’m excited to see what the author sends our way next.