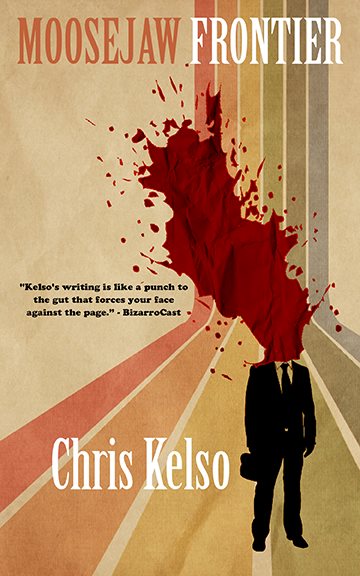 In case you missed the memo, or maybe the e-mail ended up in your spam folder alongside messages from Nigerian princes and the girls next door, bizarro fiction is officially a force to be reckoned with. It has invaded your horror, your science fiction, your writer’s workshops, and it is an unrelenting force with wider reach than the Wu-Tang Killa Bees. Case in point: Chris Kelso’s Moosejaw Frontier. The novella was released through Bizarro Pulp Press, a new, independent book press run by P.A. Douglas, who also contributed fantastic cover art for this particular book (and is a writer of some crazy good fiction himself, most notably The Hitchers, The Dark Man, and one you’ll be hearing more about soon, The Old One).

Chris Kelso, in addition to being the co-creator of the fiction journal The Imperial Youth Review, is a writer from Scotland who has a couple books already on the shelves, Schadenfreude and A Message From the Slave State, and can also be found in the recent short story anthology tribute to David Lynch, In Heaven, Everything Is Fine (released in 2013 by Cameron Pierce and Eraserhead Press). Put all of this together in a blender and you’ve got one heck of a concoction.

Moosejaw Frontier begins with a warning to the reader. Kelso puts it right there on the page; if you hate meta-fiction, or weird-for-the-sake-of-weird, or sci-fi plot devices, go ahead and skip to the end where you will find an apology. But if not, hold on to your butts, this is going to get crazy.

Passing the warning and the list of brief character sketches, you will find yourself worrying about Juan, a man who has found himself in a jail cell with the remnants of a nasty snake bite on his neck. He is in the town of Moosejaw, a town that he has quickly realized is not for him, a town that he can feel with every burning glare does not want him around. And just as quickly as we get used to his surroundings and his fellow prisoners, we find ourselves transported through time and space and hot on the trail of Raymond Hogg. Who? Why? Not even Juan knows. But when he wakes back up in the jail cell, the sheriff is holding a copy of Memoirs, which may or may not be his own personal journal, and we start realizing things are even stranger than they may have previously seemed (which was pretty strange).

The way Kelso writes Moosejaw Frontier resembles a collection of inter-related scenes that complement each other while at the same time causing the big picture to become a little less linear. There are a lot of things I want to leave for the reader to discover for themselves, as the story is all at once intriguing and a little confusing, but the type that makes you wish a good friend had read the book as well so you could discuss it over a drink or three. To try and squeeze the encompassing ideas all into one sentence, Moosejaw Frontier reminds me of parts of the afore-mentioned David Lynch’s Lost Highway combined with the feel of D. Harlan Wilson’s The Kyoto Man on a smaller scale, then mixed in with Kurt Vonnegut’s ever-present author-as-character. And all of this within just over one hundred pages.

Which brings me to my only point of contention with the story. It is only about one hundred and six pages long (including a handful of illustrations by the author and a couple of photographs). Moosejaw Frontier is easily the type of story that could have been as short as one hundred pages or as long as three or four hundred pages, but either way the story being told would never end. There is a very cyclical feel to it, as we are introduced to the author himself as a character in the book, who is personally responsible for other characters, and as the story progresses we begin to realize that some characters might be the same as other characters, depending on where we meet them. And there is the ever-present question of “what is reality?” Are some of these people ghosts? Do they all exist on the same plane, or are we dealing with multiple levels of reality in the world of Chris Kelso? And this doesn’t even get into the gangles who kill Professor McLeod, the author/character Chris Kelso’s dilemma of whether or not to be a writer, and who exactly is Raymond Hogg and/or Tamarin Bell?

A lot of questions are brought up throughout Moosejaw Frontier, and a few of them are even answered. To take the trip into the realm of Chris Kelso’s mind, to confront the Time Detectives, to walk into the town of Moosejaw, is to take a journey into what a novel (or in this case, novella) could be, to leave all rules and preconceived notions of how a story should go behind us and jump right in to the deep end. I understand the fear and trepidation, but I jumped in and look, I’m still here to talk about it. In my opinion, this is the type of book that makes reading fun. The unexpected, the strange twists, the unorthodox approach. It might not be something you’re “ready” for, but I can promise it’ll be a good time.