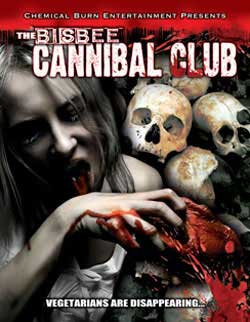 Vegetarians are disappearing from the little town of Bisbee, AZ. When a group of locals discover that their secret hallucinatory cactus garden has been used as a human barbeque and burial site, the existance of Bisbee Cannibals becomes apparent. They form a vigilante gang to avenge their garden, perhaps save a vegetarian or two from being eaten, and have a little fun in the process.

Chemical Burn, a new division of horror from the group that brought you Reality Entertainment are intent on taking on low budget films to get them out to the  masses. This first I have in hand to review from the team is called “The Bisbee Cannibal club”. Bisbee is a small town in Arizona that hosts a variety of odd folks including a rogue bunch of cannibals who target vegetarians as a main meat source. With little in the way of curbing this outbreak of deaths, a vigilante team is formed intent on seeking out these cannibals and taking them out once and for good. When a local finds the remains of Butt sniff Bob, it’s ass kicking time as the self appointed team grabs weaponry and begins to search for individuals who fit the cannibal profile. Meanwhile, the cannibals are hard pressed for more tasty meat. There favorite source comes in the way of vegi diner attendants and spoken word poetry freaks who most feel deserve to die regardless. As they indulge on non meat eaters their appetite becomes even that much more insatiable.

The newly appointed vigilante team calls themselves “the Bisbee Cannibal Hunters” which once the word gets out is only a call to the others to retaliate with their own brand of viciousness.

This 80 minute feature is directed and written by Bill Robertson. The production is kept extremely low cost which is evident in the cam corder type of footage. Special FX are kept pretty minimal reserved for scenes that use excessive  puking or blood splatter sprays.

There is surely alot of bat to the head hitting in this film,  but it probably wasn’t a good move to place the plastic bat in the back pocket while it wiggles back and forth as it gives away the realism. Though goofs like that are also kinda funny, so I suppose it gives me something to write about. 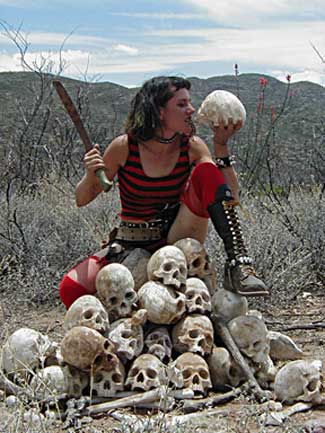 I think what we have here is a fun little community project horror film. The production has the actors interacting with several locations and townsfolk on a very tight budget. Its the kind of thing that makes the local paper with “Bisbee completes local horror film” and the whole town celebrates seeing there goods on screen. The concept has some  funny elements to it and the film is quirky in its own little down home way. Eating bad poetry speakers is something that all of want to see at one point or another, as simple as a snap of the fingers or  at the advantage of having our air a little more quiet.