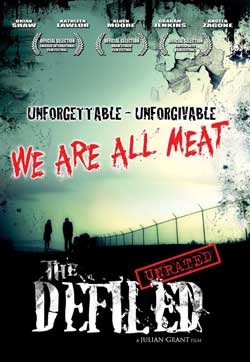 In a post apocalyptic world, science and technology have backfired leaving unfathomable destruction and a permanently diseased planet in its wake. A virus is mutating the human race turning innocent survivors into mindless cannibals.

Is there such a thing as a zombie art film? After seeing “The Defiled” you can definitely answer that question with a resounding yes. Okay, so they might not technically be zombies, just people that have been hit by a virus that leaves them incapable of speech and having a relatively fair appetite for human flesh, but let’s just say they are pretty darn close.

Incapable of speech? Well, yeah, but here is the kicker for the movie. There’s not really any dialogue to speak of, no pun intended. Lots of grunts, groans, screams and wails but that’s about it. See where my art film reference is coming from? It feels like some experimental student film but that is not meant to be a criticism. To come close to pulling something like this off is a real testament to writer/director Julian Grant. Come close you say? Unfortunately yes. What you have is a really cool film for about the first half but then the novelty and steam kind of wears off.

The movie starts with Yar, our main character, stumbling through the woods. (Because there is no dialogue you won’t know his name). Upon coming to a clearing with some water, he sees a city in the distance with black smoke rising from some of the buildings. Clearly things have not gone well as Yar has already been infected by the virus. His face looks somewhat decayed and pale, sort of like a zombie. He is soon joined by the rest of his “family” including a wife, son and daughter. The four of them enjoy some of the water before retreating back to their makeshift camp.

It isn’t long before Yar and his son go into the woods foraging for food. They stumble upon a tent with a body inside. Bad news is that this person has on a radiation suit and stacked all around are various items with labels warning of the various radiation dangers. With the mind and rational thinking obviously shot and more or less being reduced to an animal with basic instincts, Yar proceeds to drag the person back to his family and allows them to feast on the remains. Having snagged a bottle of booze for himself, Yar does not eat. Lucky for him as it isn’t long before his three companions die from the poisonous flesh.

Distraught to say the least, Yar, who manages to assist in the birth (extract might be a better term) of his dead pregnant wife, sets out with the newborn in his arms for parts unknown. Odd to say but from here on out the movie turns into a road picture of sorts as Yar meets up with a woman that he saves from two other crazed infected men. Together they wander through desolate fields and buildings, all the while slowly forming a bond.

“The Defiled” is a different kind of movie, and not for everyone. Julian Grant does a good job with the directing and the movie is shot with a bluish tone, definitely adding to the decay and despair. And kudos to Julian for trying to attempt to pull off a film of this nature. Let’s face it, it’s hard enough for a lot of films to keep the narrative tension and pacing tight with dialogue, but try it without and it’s a pretty steep hill to climb. Still, the film manages to keep you sucked in for the first half, partly because it is such a different viewing experience. Problem is it just becomes a little repetitive. Brian Shaw as Yar and Kathleen Lawlor do excellent jobs in their roles. They both portray an incredible amount of emotion in their facial expressions and gestures without it ever being too melodramatic.

I can’t recommend buying this movie as I just don’t think it would be one to watch over and over again. Definitely rates a rental for the curious and general zombie lovers who want something completely different. On that, the movie delivers. 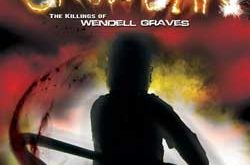