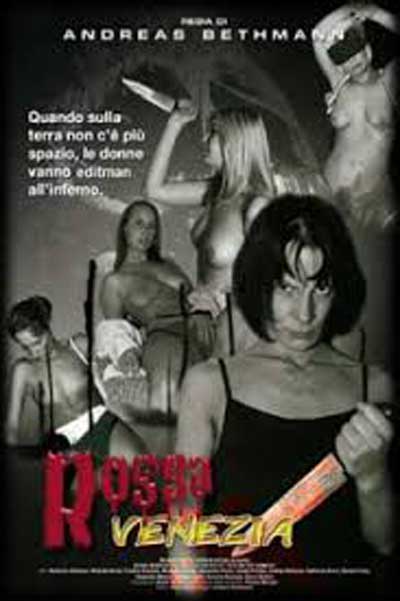 A woman who was jailed for killing her husband after finding him cheating is released and becomes a serial killer, attempting to rid the world of women who bring pain on other women.

This… this is just hardcore p**n. There’s literal hardcore p**nography in the first minute of the movie, and it goes on throughout. So that’s relatively new, but not to fans of director Andreas Bethmann.

Bethmann is known for movies like this, reminiscent of earlier films like Forced Entry, starring one of the actors from Deepthroat. Nudity and sex have a storied history in horror films, and most of the classics have at least some kind of sex scene. In fact, there are many who would argue that horror as a genre is misogynistic, consistently choosing to show nude women in lieu of actual plot in a lot of cases. Others argue what we will here call the “Final Girl Theorem,” in which the presence of a virginly woman who defeats the big baddie is a hero for women everywhere. Still others will point to that “final girl” as a slap in the face of womanhood, stating that the filmmakers insistence that the woman be “the virgin” sets back women’s rights. This is a subject that has been debated endlessly for quite a long time, with neither side giving much ground over the years, and certainly a subject that we will not settle here. And then Andreas Bethmann comes in and says the hell with all that, I’m making lots of horror p**nos. 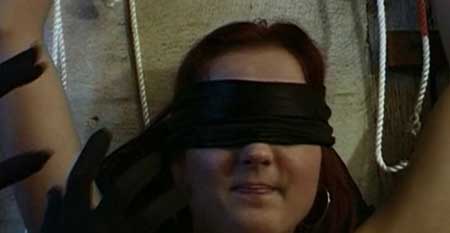 The film opens with a woman reading a diary written by a woman serial killer, in which she takes us through her failed marriage, ultimately leading to her murdering her husband and his lover. She is sent to prison, where she is forced to endure lesbian sexual experiences and sadistic guards. This, naturally, further damages her psyche, and convinces her that she must rid the world of women who remind her of her original situation and, ultimately, almost all other women as well. So she embarks on a tour de force of woman killing, starting in the original frames with a woman having sex with a man. She comments that she’s just like the woman who broke up her marriage, shortly before beheading the woman and stabbing the man with a pitchfork.

Rozza Venezia is indeed a hardcore p**n film, but it’s also an interesting mix of the “women in prison” and “revenge fantasy” subgenres, along with your standard splatter gore. Bethmann certainly does specialize in this type of movie, and to be fair, he does it pretty well. There is a lot of truly nasty gore, from the aforementioned decapitation via shotgun and pitchfork to the guts to dissolving people in acid and stabbing someone in the eye socket with a pencil. There’s a lot of creative kills in this film, and that’s laudable no matter what it took to get us there.

And by what it took, I of course mean lots and lots of lesbian sex. This is, primarily, lesbian p**nography, though there are a couple of instances of straight sex thrown in as a matter of course. Two of the women who were in prison with the protagonist leave prison and form an escort business, moving into a house owned by a family member of one of the women. We’re led to believe that they murder her to take over her house, but that all happens off-screen, so we can’t be entirely sure. The rest of the film is a back-and-forth of the serial killer calling escorts to murder them during sex and the lead escorts trying to get the police to investigate a little further to improve their business and keep their girls safe.

The acting is not great, though most characters are passable. One woman, whose boyfriend is killed with a pitchfork (no, not that one. Another, entirely separate instance) is noticeably and horrifically bad, but most of the rest are half decent, which is actually well above par for this type of movie. There’s not much in the way of plot other than the basic setup, which allows her to kill any and everyone along the way. Quite frankly, however, the plot is better and more mapped out than a lot of the shitty “extreme” films I’ve come across. So, that’s not really a legitimate complaint either. Ultimately, there’s a lot to be disturbed by here, from the gruesome sexual sadism on-screen to the nihilistic philosophy driving the killer. At one point, she states that she chooses to remove her victims’ heads because they offend her, and they remind her of all women’s potential to cause harm like the woman who slept with her husband. She talks about how exquisite it is to be masochistic. Hooray for good fun! 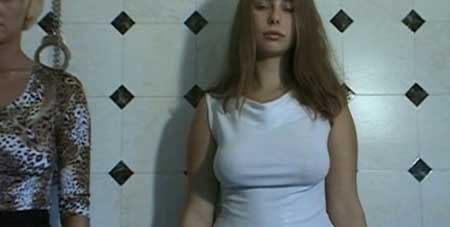 The bottom line is, when you come across a film like this, you know it’s going to be a trashy flick. And don’t get me wrong, this film is absolute garbage, but there’s more to it than that. The kills weren’t spectacular, and generally very fake looking, but they’re bloody, violent kills in a lesbian p**no. What’s not to love? It is excruciatingly long at just over two and a half hour, but if you’re in it for what it is, that’s not really a criticism either.

I would have to say that, while I certainly didn’t love it (and there’s not much to love), and I would definitely question the motives and psyche of those who are legitimately turned on by this (or at least those who stay turned on throughout the entire run-time), it’s kinda a fun flick. It turns the entire gender stereotype of horror films on its head by making something that is both entirely p**nographic and also entirely from the woman’s perspective. Gender in film is a hot topic of recent times, and by making women the central characters, the perpetrators, and the only people in the movie that at all seem to know what they’re doing, and giving them the sexual power to overcome every man who appears in the film, can you not make the case that this movie doesn’t fight as much for women’s lib than a film like Anatomy of Hell? An interesting discussion, at least…