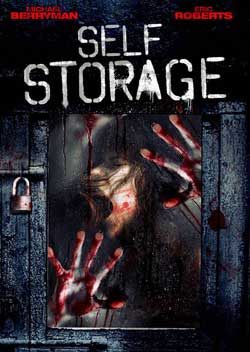 The friends of a night watchman, at a highly secured self storage facility, are home from college and looking to party.

I’ve always maintained a soft spot for Eric Roberts.  From the onset of his career in forgotten classics like “The Pope of Greenwich Village” and “Runaway Train,” he’s always possessed a gift for portraying amiable nuts.  Pushing sixty, Roberts seems to be harder at work in the B-movie realm than ever before, his name attached to nearly fifty different titles this year alone, most of them genre flicks.  The man either never takes a day off (or even smoke breaks), or he’s effectively cloned himself.  Whichever the case, color me impressed.

Roberts appears in villain mode for “Self Storage,” an unforgivably disjointed jumble of horror and comedy that falls short of succeeding at either.  However, it certainly isn’t due to a lack of effort on the part of writer/director Tom DeNucci, who pulls off the hat trick here by performing the lead role of Jake as well.  Pity, because sharp, witty dialogue and an inspired plot are usually a recipe for indie success.  Not so much the case with this mixed bag. 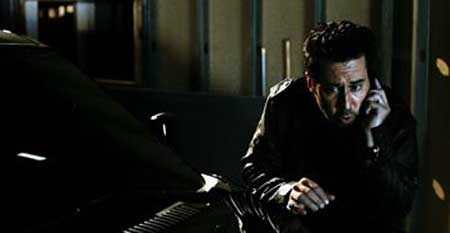 An amusing exchange in which Roberts’ character Walter affectionately scolds Jake for shirking his night watchman duties at the storage facility Walter owns begins the festivities swimmingly.  These nocturnal one-man shenanigans, caught on security cameras and referred to as “The Best of Jake Reel,” are hysterical and apropos for a stoner left to his own devices all night.  When I worked third shift at a Radisson front desk, three a.m. was time to break out the booze and race the hotel’s Rascals through the lobby for our motley skeleton crew.

The moment Michael Berryman enters the office as senior guard Trevor, trading profane barbs with Walter and Jake, I was in love.  Berryman, whose once-terrifying countenance has softened over the years to that of merely a very intimidating older gentleman, is always such a welcome sight in any movie.  Hell, I used to watch the interminable “Highway to Heaven” as a child just in case he popped up in his reoccurring role of The Devil.  With him on board, I was certain that I’d been blessed with a winner.

Then the movie happened.  Jake, suspecting termination is imminent, allows a gaggle of his college friends to throw a party on the grounds after hours.  That’s certainly one way to handle the possible loss of a job.  He could have just buckled down and stopped acting like a jackass, but to each his own.  In his haste getting things ready, Jake accidentally triggers a fail-safe acid shower in one of the units, disintegrating the planned victims of Walter’s illegal organ-harvesting ring.  This puts the boss man in a bit of a pickle, as he is expected to have his haul ready by the time coked-up crime lord Jonah (a hammy, fun Jonathan Silverman, who also serves as one of the producers) shows up in the morning to collect.  Luckily for Walter, Jake’s pals are young and chuck full of healthy organs for him to pilfer throughout the course of the evening.

After setting up this outstanding premise, “Self Storage” quickly begins tearing itself down to a crumbling foundation.  Led by the grating Nick Principe as Freddie, the merry band of party goers immediately ignite the film’s downward spiral with their arrival.  Amongst the group are a couple of requisite hot chicks (both of whom I suspect have at least a few p*rnos to their credits) and two geeks to serve as comic relief.  Unfortunately, they’re not remotely funny, and the film all but stands still in the middle third as we are subjected to endless scenes of these people getting poopy-faced and sneaking off to either have drunken sex or masturbate.  If that isn’t bad enough, the gang also includes Jake’s former flame Sara-Marie, played by the adorable Gillian Williams.  She’s completely wasted here, as she and Jake leave to drive listlessly around the property, discussing their lost love and plans for the future.  These scenes might as well have been unbroken takes of paint drying for all they accomplish to hold interest or propel the action.

Even as Walter and Trevor show up to carry out their nefarious scheme, the wrong turns “Self Storage” embraces like a baby’s binky just keep relentlessly coming.  After establishing such a wonderful dynamic early on, Roberts and Berryman are reduced to ranting evildoer and dutiful henchman, their previously chummy give-and-take drained away.  However, watching these two professionals engaged in an hour-long staring contest would be preferable to everything else going on in “Self Storage,” so I’ll quit my moaning on that particular aspect.

The deaths, though humorous in that Trevor isn’t supposed to be killing these kids, only abducting them for Walter’s surgeries, are as dull and lifeless as the dialogue becomes.  Of course, when you kick off the mayhem with a deliriously gory moment of innocents being melted alive, that’s one tough act to follow.  Hence, why the film doesn’t even bother trying.  DeNucci proves himself capable behind the camera for his first feature, if not entirely confident.  His next outing, “Army of the Damned,” may benefit from his skill-honing here.  Plus, it includes Berryman and another of my horror heroes Tony Todd, therefore placing it (towards the bottom) on my must-see list for upcoming flicks.

Once Jake and Sara-Marie discover Walter’s plans and Jonah arrives for the organs, the finale plays out like a half-assed answer to the question, “How do we wrap this up in, say, five minutes?”  It’s anticlimactic bordering on inane, and far too pat for a movie that fancies itself as twisted cinema.  Still, the acid shower is worth the price of admission alone for you gore hounds.  Just don’t be too discouraged if you’re unable to stick around for what follows in “Self Storage.”  You might be dodging a bullet.